Dr. Mohamed A. El-Erian is an internationally respected economist and financier with experience at the highest level of business and government.  Markets hang on his analysis and insight, and audiences interested in issues of finance and global markets buzz when El-Erian comes to the podium.  Meeting planners share their praise for his ability to connect with audiences through a humorous laid-back style, and to clearly explain the complex issues of the global economy.

Please send me availability & fees for Mohamed El-Erian
Thank you for your interest in this Harry Walker Agency speaker.
You will hear from one of our agents in the next 24 hours. If you have any other questions or information, please call us right away at 646.227.4900. Are you also interested in learning more about other speakers? Create a My Speaker List.
Rave Reviews About Mohamed El-Erian
“
In my thirteen years as an event producer, I have never received such positive feedback from a keynote speaker before. I was stopped in the hallways and networking events numerous times by attendees who had glowing remarks about Dr. El Erian’s presentation. One attendee stated that ‘it is rare that a speaker not only presents well, but presents quality content.' I can say with 100% confidence that this was a wise investment in our business, as he helped to build our reputation as a program with great content. Personally I also wish to thank Dr. El Erian for being friendly, flexible, hospitable and considerate to our team. He was gracious and kind, and a pleasure to meet.

Play
Now
Mohamed El-Erian: Our world is being disrupted from below and above - Fund Forum

What's Ahead in the Global Economy

Mohamed El-Erian in the News

Internationally respected economist and financier with experience at the highest level of business and government, here is a sampling of MOHAMED EL-ERIAN's media appearances: 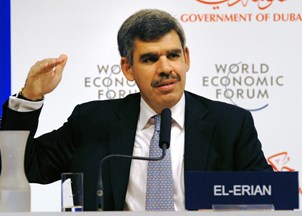 Renowned as one of the world's most widely followed economists, MOHAMED EL-ERIAN is a go-to voice on the global economy. Named to Foreign Policy's "Top 100 Global Thinkers" for four consecutive years, a Bloomberg Opinion and Financial Times columnist, and a fixture on Bloomberg Markets,  CNN, CNBC, and more, El-Erian decodes even the most complex economic and political phenomena with clarity, concision and substance. Having addressed audiences everywhere from The World Economic Forum, to CME Group, to LinkedIn, El-Erian offers timely and actionable insights. He receives rave reviews at every event thanks to his dynamic, informative presentations and openness with audience-members, such as: "Our attendees have been raving about your presentation and valuable insight!" (CFA Society Chicago). 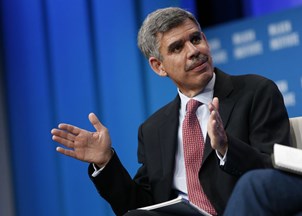 An internationally respected economist and financier MOHAMED EL-ERIAN has experience at the highest level of business and government. A go-to voice on how to decode international markets and the global economy, El-Erian brings insight into how contemporary issues influence and affect economies.   One issue he’s commented on quite frequently is climate change and environmental, highlighting how new technologies provide sustainability opportunities, the climate crisis could impact market stability, and how collective global economic action could help move the needle on the climate crisis. With his BloombergView column regularly making headlines thanks to El-Erian's spot-on and substantive analysis, El-Erian has shed light on topics as varied as how game theory applies to President Trump's decision to pull out of the Paris Agreement, to how short-term economic benefits will be outweighed by long-term environmental consequences.  Heralded for his substantive, forward-thinking, and genuinely engaging keynote style, El-Erian has been in-demand to address thousands at events like the Conference de Montreal, where he drew on his experiences at the helm of President Obama's Global Development Council to address the issue of climate change, to EPMG’s meeting in Frankfurt, where he discussed how the global economy can more efficiently address the question of climate change. At events, El-Erian receives out of this world reviews such as: "Mohamed did an excellent job. He tailored his remarks really well… [A] sampling of the open-ended feedback: ‘perfect start’; ‘he was excellent and very happy to see the high caliber of keynote speaker’; ‘fantastic, very informative’; ‘Excellent delivery taking complicated thoughts but delivering them in real life experiences.’"(Commonfund) 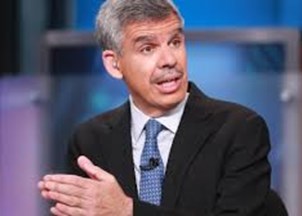 Renowned as one of the world's most widely followed economists MOHAMED EL-ERIAN is in-demand by major companies and elite academic institutions alike. Named both President of Queen's College at the University of Cambridge and to Under Armour's Board of Directors, El-Erian is heralded for his thoughtful leadership, in-depth understanding of the global economy, and astute market predictions. Named to Foreign Policy's "Top 100 Global Thinkers" for four consecutive years, a Bloomberg Opinion and Financial Times columnist, and a fixture on Bloomberg Markets,  CNN, and CNBC, El-Erian decodes even the most complex economic and political phenomena with clarity, concision and substance. Consistently heralded as a smash-hit who is as engaging as he is informative,El-Erian receives rave reviews such as: "In my thirteen years as an event producer, I have never received such positive feedback from a keynote speaker before... One attendee stated that ‘it is rare that a speaker not only presents well, but presents quality content.' I can say with 100% confidence that this was a wise investment in our business... Personally I also wish to thank Dr. El Erian for being friendly, flexible, hospitable and considerate to our team. He was gracious and kind, and a pleasure to meet." (Information Management Network); "We loved hosting Dr. El- Erian! He was amazing!" (Economic Club of Canada); "Our attendees have been raving about your presentation and valuable insight!" (CFA Society Chicago)

The Only Game in Town: Central Banks, Instability, and Avoiding the Next Collapse 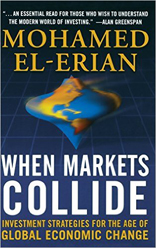 When Markets Collide: Investment Strategies for the Age of Global Economic Change

Mohamed A. El-Erian has worked on economic and financial issues in both the public and private sectors. Currently, he is the Chief Economic Advisor at Allianz, the corporate parent of PIMCO where he formerly served as chief executive and co-chief investment officer (2007-14), a columnist for Bloomberg View, a contributing editor at the Financial Times, and a member of the UnderArmour and several non-profit boards. He chairs Allianz International Advisory Board and, from December 2012 to January 2017, chaired President Obama’s Global Development Council.

Having served for 15 years as an international civil servant at the IMF in Washington DC, Dr. El-Erian first joined PIMCO in 1999 and was a senior member of PIMCO's portfolio management and investment strategy group. He rejoined the company at the end of 2007 after serving for two years as president and CEO of Harvard Management Company, the entity that manages Harvard’s endowment.

El-Erian has published widely on international economic and finance topics. His 2008 book, When Markets Collide, was a New York Times and Wall Street Journal bestseller, won the Financial Times/Goldman Sachs Business Book of the Year and was named a book of the year by The Economist and one of the best business books of all time by the Independent (UK). His 2016 book, The Only Game in Town: Central Banks, Instability and Avoiding the Next Collapse, was also a New York Times bestseller.

Among the many recognitions, El-Erian was named to Foreign Policy’s list of “Top 100 Global Thinkers” for four years in a row and, in 2017, to Investment News’ list of 20 market “icons and innovators.” In both 2016 and 2017, Linked-In named him as one of its top three “voices” among its “influencers.” Since 2014, he has been on the jury for the annual for the Financial Times/McKenzie Book of the Year award. He is a member of the Council on Foreign Relations (CFR).

El-Erian co-chairs the capital campaign for Cambridge University and its colleges. He has served on several boards and committees, including the U.S. Treasury Borrowing Advisory Committee, the International Center for Research on Women, the Peterson Institute for International Economics, the IMF's Committee of Eminent Persons, New America, and the New York Fed’ Investor Advisory Committee on Financial Markets. He is currently a board member of several non-profits, including the National Bureau of Economic Research (NBER – Executive Committee), the Carnegie Endowment for International Peace (Vice-Chair), KAUST, Interlochen, and the OCSA Foundation. Since 2007, he has been Chair of Microsoft’s Investment Advisory Board, since 2017, serves on the external advisory board for Investcorp, and has just recently joined the board of directors at Under Armour. He is a current Senior Advisor at Gramercy Funds Management LLC, and has advised several central banks and finance ministries.

El-Erian has received numerous awards and recognition for his economics, financial industry and philanthropic activities, including named to the Fixed Income Hall of Fame and receiving the Ukleja Center’s Nell and John Wooden Ethics in Leadership award, the Creative Leadership Award by the Louise Blouin Foundation, the Egyptian Cancer Network’s Lifetime Achievement Award for his support of cancer treatment and cures, and the Middle East Institute’s Visionary Award. He was named by Investment News as an “Icon and Innovator.”

El-Erian is a regular participant in economic and financial conferences, including at the BIS, the Bank of England, the G-20, the IMF, the World Bank and several private sector events. Among his many speeches, he delivered the Per Jacobsson Foundation Lecture in Washington D.C, the Homer Jones Memorial Lecture at the Federal Reserve Bank of St. Louis, the Bagehot speech at The Economist, the luncheon keynote at the IMF's Annual Research Conference, and others at several CFA society and financial industry events. He appears regularly on television, particularly BBC, Bloomberg, CNBC, Fox Business and CNN.