Together, seasoned political strategist and former White House senior advisor Symone D. Sanders and former Representative and cybersecurity expert Will Hurd are uniquely positioned to offer insider insights about how to get things done in Washington, D.C., as well as nuanced analysis of crisis management in today’s most pressing issues.

Seasoned political strategist and commentator Symone D. Sanders offers an in-depth analysis of today’s most important issues with authenticity, humor, and unparalleled insight. Drawing on her White House experience as a Senior Advisor, Sanders shares her expertise in communication and political strategy, in-depth analysis of key political issues, and the challenges and possibilities for radical change, offering vitalizing takeaways that engage as well as inform.

Known for putting good policy over party, Will Hurd draws on his tenure in Congress to share what is coming next in D.C. and his thoughts on how to move the country forward as a united nation. He is currently a managing director at currently Managing Director at Allen & Company, a private investment bank, and author of American Reboot: An Idealist’s Guide to Getting Big Things Done, a vision for leadership that is values-based and inspiring for audiences of all kinds.

Sanders and Hurd offer powerful commentary about the future of policy and the complex political landscape, and how to strategize for progress despite the rise of partisanship, teaming up for an impactful program that resonates with organizations and individuals alike. 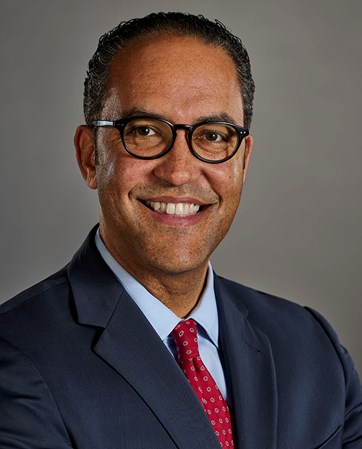 Cybersecurity expert, former Congressman and CIA officer, and author Will Hurd is a leading voice for bipartisanship, inclusivity, and finding unity in the face of divisive issues. While serving in Congress, Politico called Hurd “the Future of the GOP,” and he was renowned for his ability to put policy ahead of politics – getting more substantive legislation signed into law in three terms than most achieve in decades. Prior to his work in politics, Hurd served as an undercover officer in the CIA, honing an in-depth analysis of current national security concerns and the future of cybersecurity as the next domain of conflict. In his new book, American Reboot: An Idealist’s Guide to Getting Big Things Done, Hurd provides a bold political playbook for today’s most pressing issues and a vision for leadership that is values-based and inspiring for audiences of all kinds.

A renowned cybersecurity expert, Hurd is currently a managing director at Allen & Company, working with entrepreneurs on the cutting edge of technology to anticipate the shockwaves of the future. He is also a trustee of the German Marshall Fund, a board member for OpenAI, and served as a fellow at the University of Chicago Institute of Politics. Hurd is an in-demand expert on the future of politics, national security, foreign affairs, and cybersecurity. Offering insights informed by his time in the CIA and the government, Hurd helps organizations and individuals put threats into context and direct our focus toward unifying strategies for policy, economic empowerment, and America’s technological future.

Please send me availability & fees for Symone D. Sanders & Will Hurd
Thank you for your interest in this Harry Walker Agency speaker.
You will hear from one of our agents in the next 24 hours. If you have any other questions or information, please call us right away at 646.227.4900. Are you also interested in learning more about other speakers? Create a My Speaker List.
Learn more about Symone D. Sanders & Will Hurd
Biography

Will Hurd is currently a managing director at Allen & Company and former member of Congress, cybersecurity executive, and undercover officer in the CIA. For almost two decades he’s been involved in the most pressing national security issues challenging the country whether it was in the back-alleys of dangerous places, boardrooms of top international businesses or halls of Congress.

After stopping terrorists, preventing Russian spies from stealing our secrets, and putting nuclear weapons proliferators out of business, Will helped build a cybersecurity company that prepared businesses for the next domain of conflict – cyberspace.

While in Congress, Texas Monthly and Politico Magazine called Will “The Future of the GOP,” because he put good policy over good politics at a time when America was often consumed with what divides us rather than what unites us. He was able to get more legislation signed into law in three terms than most congressmen do in three decades – substantive legislation like a national strategy for Artificial Intelligence.

Will is a native of San Antonio and earned a Computer Science degree from Texas A&M University. Additionally, he is growing the US transatlantic partnership with Europe as a trustee of the German Marshall Fund, an OpenAI board member, and most recently served as a fellow at the University of Chicago Institute of Politics. He is also the author of American Reboot: An Idealist’s Guide to Getting Big Things Done.