Secretary of the Treasury Jack Lew (2013- 2017) has served as the most senior economic official in the U.S. government, helping to shape policies that drove the longest economic recovery in American history.  At Treasury, he oversaw all aspects of international and domestic fiscal policy, including issues related to financial regulation, global sanctions regimes, tax policy, debt management, and trade.  As a speaker, he brings the freshest insights and an insider's knowledge of the individual people and policies affecting the direction of the global economy.  Secretary Lew addresses these issues both from an historical perspective -- given his over 30 years of government experience -- and by looking forward to how the new Administration and Congress may tackle the many challenges they face.  With his unique perspective, Secretary Lew presents an engaging view of how complex financial and geopolitical forces are shaping our economy, both domestically and overseas.

Please send me availability & fees for Jack Lew
Thank you for your interest in this Harry Walker Agency speaker.
You will hear from one of our agents in the next 24 hours. If you have any other questions or information, please call us right away at 646.227.4900. Are you also interested in learning more about other speakers? Create a My Speaker List.
Rave Reviews About Jack Lew
“
Thank you so much for all your help to secure the Secretary as our opening speaker and with your help through the planning process! It was a huge success! We received such great feedback on his remarks, interview and the panel! One of the best we’ve had. He is just the nicest man!

The Economic Outlook with Former Secretary of the Treasury Jack Lew

Secretary Lew provides the freshest insights and an insider's knowledge of the individual people and policies affecting the direction of the global economy.  He takes audiences into the future of the world economy, considering pressing fiscal policy issues such as the debt ceiling, trade sanctions, ...

Secretary Lew provides the freshest insights and an insider's knowledge of the individual people and policies affecting the direction of the global economy.  He takes audiences into the future of the world economy, considering pressing fiscal policy issues such as the debt ceiling, trade sanctions, regulatory policy, and tax policy. 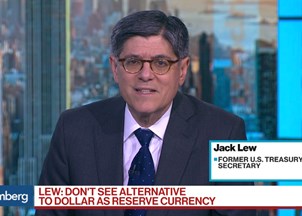 Jack Lew in-demand for his insights on the global economy

Former Treasury Secretary JACK LEW has been in-demand by several major outlets thanks to his shrewd insights on the global economy. Recently, Lew penned a fascinating and widely-circulated article for Foreign Affairs on "The Use and Misuse of Economic Statecraft," highlighting how tariffs and sanctions can be successfully used to shape global affairs, but when implemented in an aggressive or irresponsible manner can become counterproductive. Lew has been selected to engage in conversation at the Atlantic Discussion on the topic, and following the article's publication Lew was also sought-out for an in-depth interview with Marketplace. Lew also recently appeared on Bloomberg Surveillance and CNBC. Having served as the most senior economic official in the U.S. government, since leaving the White House, Lew has been in-demand by elite organizations. Lew recently made headlines in CNBC, thanks to his appointment as an advisor to fintech startup Blend. Having attracted $160 million in private funding, Blend handles online mortgage applications for major players from Freddie Mac to Wells Fargo. As a speaker, Lew brings the freshest insights and an insider's knowledge of the individual people and policies affecting the direction of the global economy. He recently delivered a keynote at the 2018 Seoul Global Financial Conference and was interviewed by NPR on the effectiveness of sanctions, and on escalating trade conflicts with China. 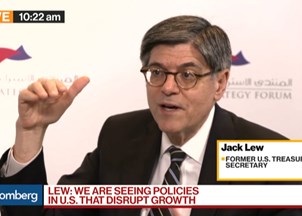 Selected to deliver insights for 500 global CEOs, senior public officials and academics at the Arab Strategy Forum, former Secretary of the Treasury (2013-16) JACK LEW shed light on the state of the global economy in a compelling, substantive conversation. Touching on key issues from Brexit to trade to U.S. economic growth, Lew was also sought-out to deliver an in-depth interview on Bloomberg while at the forum. Having served as the most senior economic official in the U.S. government, since leaving the White House, Lew has been in-demand by elite organizations to decode what to expect from the future economic landscape. He made headlines in CNBC for the announcement that he would be leading fintech start-up Blend's advisory board, and published an influential article in Foreign Affairs on "The Use and Misuse of Economic Statecraft." Heralded for his candid and clear analysis of complicated economic issues, Lew consistently receives rave reviews at each engagement such as: "Secretary Lew’s participation received a lot of positive comments onsite and his session was well-received. [He] had a great Q&A session... there was a lot of participation and engagement." (European Pensions & Investments Summit) 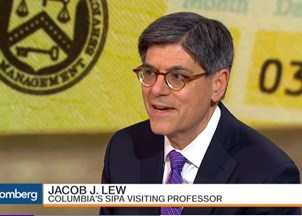 Jack Lew in the News 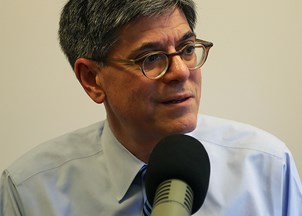 Jack Lew sought-out for insights into global economy by Politico

Former Treasury Secretary JACK LEW shared sharp analysis on the global landscape and how looming crises could affect the stock market with the Politico Money podcast. Shedding light on current economic growth, Lew shared how the stock market has a newfound resilience. As Lew said, “You look at the number of things where it’s kind of binary — whether things are really good or really bad, whether it’s North Korea, the possibility of trade wars, future deficits in the U.S. — the range of issues that have in the past made markets nervous, it seems they are kind of treated as a new normal.” His shrewd commentary was instantly picked up by Business Insider. The Secretary of the Treasury in President Obama’s last term, and a White House Chief of Staff and Director of Office Management and Budget preceding that, Lew helped shape policies that drove the largest economic recovery in U.S. history.  Heralded for his tremendous breadth of experience and shrewd insights into what to expect from global markets, he is frequently sought-out by top media outlets. Just recently he was interviewed on Bloomberg regarding the new tax legislation.

Listen to Jack Lew on the Politico Money podcast >> 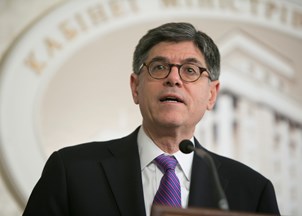 Former Secretary of the Treasury JACK LEW shared shrewd analysis and revealed underlying trends for over 2,000 senior executives and office professionals at Pershing INSITE, a premiere financial services industry event.  Delivering both a keynote on the global economic outlook and participating in a panel on the Federal Reserve, capital markets and monetary policy, Jack Lew made headlines for his candid remarks on the most pressing fiscal policy issues from trade sanctions to tax policy. A sample of the headlines from top financial outlets: “Jack Lew’s Warning: ‘Don’t Blow a Hole in the Deficit’,” “Jack Lew on the DOL Rule, Robos and the ’08 Crisis” “Former Treasury Secretary Jack Lew: DOL fiduciary rule has 'important purpose’”. With over 25 years of government experience as well as top positions in the private sector, Jack Lew is able to provide in-depth and experience-based analysis on the global economy and what is possible in Washington. In his INSITE keynote, Lew touched on everything from how technological advancements will impact economic growth, to geopolitical risks, and what lies ahead for China and Europe.

The Honorable Jacob J. Lew serves as a Partner at Lindsay Goldberg and is a visiting professor of International and Public Affairs at Columbia University’s School of International and Public Affairs. Lew was confirmed by the United States Senate on February 27, 2013 to serve as the 76th Secretary of the Treasury. He served in that position until January 20, 2017.  As Secretary of the Treasury, he helped to shape policies that drove the longest economic recovery in American history and oversaw all aspects of international and domestic fiscal policy, including issues related to financial regulation, global sanctions regimes, tax policy, debt management, and trade.

Lew previously served as White House Chief of Staff to President Obama (2012-2013). Prior to that role, Lew oversaw the U.S. budget as Director of the Office of Management and Budget (OMB) from 2010 to 2012, a position he also held in President Clinton's Cabinet from 1998 to 2001. Before returning to OMB in 2010, Lew first joined the Obama Administration as Deputy Secretary of State for Management and Resources.

Before joining the State Department, Lew served as managing director and chief operating officer for two different Citigroup business units. Prior to that, he was executive vice president and chief operating officer of New York University, where he was responsible for budget, finance, and operations, and served as a professor of public administration. From 2004 through 2008, Lew served on the Board of Directors of the Corporation for National and Community Service and chaired its Management, Administration, and Governance Committee.

Lew was also OMB Director from 1998 to 2001, when he led the Clinton Administration budget team and the U.S. budget operated at a surplus for three consecutive years. Earlier, as OMB's Deputy Director he was a member of the negotiating team that reached a bipartisan agreement to balance the budget. As Special Assistant to President Clinton from 1993 to 1994, Mr. Lew helped design Americorps, the national service program.

Lew began his career in Washington in 1973 as a legislative aide. From 1979 to 1987, he was a principal domestic policy advisor to House Speaker Thomas P. O'Neill, Jr, when he served the House Democratic Steering and Policy Committee as Assistant Director and then Executive Director. He was the Speaker's liaison to the Greenspan Commission, which negotiated a bipartisan solution to extend the solvency of Social Security in 1983, and he was responsible for domestic and economic issues, including Medicare, budget, tax, trade, appropriations, and energy issues.

Before joining the Obama Administration, Lew co-chaired the Advisory Board for City Year New York and was on the boards of the Kaiser Family Foundation, the Brookings Institution Hamilton Project, and the Tobin Project. He now serves on the Board of the Center for Budget and Policy Priorities and is a member of the Council on Foreign Relations, the National Academy of Social Insurance, and of the bar in Massachusetts and the District of Columbia.