Candace Nelson is the Founder of Sprinkles and Pizzana, a New York Times bestselling author, and an expert in turning one’s passion into a profitable business. Her initial venture Sprinkles grew from ‘the world’s first cupcake bakery’ to one of the most successful cupcake brands ever, and led to the New York Times bestselling The Sprinkles Baking Book. Nelson followed with the launch of Pizzana, a growing chain of Michelin Bib Gourmand-awarded pizzerias, and continues to expand her portfolio: co-founding the children’s sensory learning centers Play 2 Progress and launching CN2 Ventures with her husband, Charles Nelson, to invest in early stage consumer companies. She is a highly sought-after speaker on topics such as building a breakthrough brand, harnessing purpose to create a great company culture, and cultivating a community of brand loyalists.

Nelson’s forthcoming book, Sweet Success, published by HarperCollins Leadership is a guide to entrepreneurship. With her characteristic warmth and humor, Candace leverages her entrepreneurial expertise to offer inspiration and practical strategies for individuals looking to spark creativity, build resilience, cultivate innovation, and build a brand that customers adore. Nelson is also a contributor to The Wall Street Journal, where she writes on the challenges and opportunities facing small business owners today. Candace has appeared on Good Morning America, Today, The Chew, The Talk, Shine On With Reese Witherspoon, and Nightline. She has also been featured in Inc., O Magazine, Vanity Fair, Bon Appetit, Food and Wine, The New York Times, and The Los Angeles Times. Candace was the star of the syndicated Food Network hit show Cupcake Wars, an Executive Producer and star on Netflix’s Sugar Rush, and is an Executive Producer on the upcoming Hulu show, Best in Dough, featuring Pizzana’s Executive Chef. Bake Something Sweet with Candace Nelson

Founder of Sprinkles, the world's first cupcake bakery, and one of the judges on the popular Netflix show Sugar Rush, Candace Nelson opens up her recipe vault to bring you an irresistible dessert while chatting about following your dreams, the inspiration behind creating her own business, how she de ...

Founder of Sprinkles, the world's first cupcake bakery, and one of the judges on the popular Netflix show Sugar Rush, Candace Nelson opens up her recipe vault to bring you an irresistible dessert while chatting about following your dreams, the inspiration behind creating her own business, how she develops recipes and other fun topics. Treat yourself to this sweet event and share in the fun! 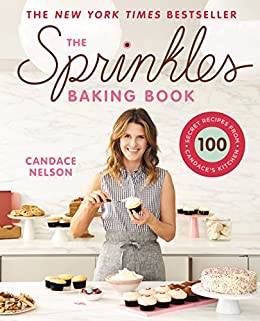 Candace Nelson is the founder and pastry chef of Sprinkles, the world's first cupcake bakery. Started in Beverly Hills in 2005, Candace's sophisticated take on the classic American cupcake revolutionized the baking industry and made Sprinkles an overnight bakery sensation.

Sprinkles Cupcakes now has 40 locations across the country, including its innovative cupcake ATMs. While Candace has stepped back from day-to-day operations, she remains on the Sprinkles board and turned her entrepreneurial acumen to toward other areas of the food and retail industry. She launched Pizzana in 2017, a growing chain of Michelin Bib Gourmand-awarded neo-Neapolitan pizzerias; co-founded Play 2 Progress a growing chain of children's sensory learning centers the same year; and recently launched CN2 Ventures with her husband, Charles Nelson, which invests in early stage and growth stage companies in the retail, food, direct-to-consumer, and branded consumer product sectors.

Candace is an executive producer and judge of Netflix's Sugar Rush, a baking competition show during which contestants flex their creativity, whipping up sweet and, sometimes, unexpected treats. She is also executive producer of a new food competition show to begin streaming on Hulu in 2022. She filmed the first 10 seasons as a judge of the global hit Food Network show, Cupcake Wars, and has appeared on Good Morning America, Today, The Chew, The Talk, Nightline and in O, Vanity Fair, InStyle and People magazines. Her cupcakes have been featured on The Oprah Winfrey Show and in Bon Appetit, Food and Wine, The New York Times, and The Los Angeles Times.

Her debut cookbook, The Sprinkles Baking Book, is a New York Times Bestseller and she is publishing a business book for first time founders with HarpersCollins Leadership in 2022. Candace is also a Wall Street Journal contributor.

Candace spoke on the connection between play and innovation in her TedxWesleyanU talk in April 2021.