On 13 October 2006, he was elected to be the eighth Secretary-General by the United Nations General Assembly. On 1 January 2007, he succeeded Kofi Annan. As Secretary-General, he was responsible for several major reforms on peacekeeping and UN employment practices. Diplomatically, Ban has taken particularly strong views on global warming, pressing the issue repeatedly with U.S. President George W. Bush, and on the Darfur conflict, where he helped persuade Sudanese president to allow peacekeeping troops to enter Sudan.

Ban was named the world's 32nd most powerful person by the Forbes list of The World's Most Powerful People in 2013, the highest among South Koreans. In 2016, Foreign Policy named Ban one of the Top 100 Global Thinkers for his achievement of making the Paris Agreement a legally binding treaty less than a year after it was adopted. 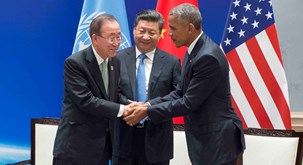 Please send me availability & fees for Ban Ki-moon
Thank you for your interest in this Harry Walker Agency speaker.
You will hear from one of our agents in the next 24 hours. If you have any other questions or information, please call us right away at 646.227.4900. Are you also interested in learning more about other speakers? Create a My Speaker List.
Rave Reviews About Ban Ki-moon
“
The program was fantastic!...SG Ban [was a] highlight. We really appreciate your help with securing [him]... I look forward to working with you on the next one!

Play
Now
Keynote - We are faced with a daunting set of challenges | Rally of Hope [9:41]

Play
Now
In Conversation clip - Is the solution to Climate Change in the grassroots? | IEFA [3:25]

A Call to Action: The Imperative of Global Leadership in our Interconnected World

The Emergence of New Tigers: Trade and the Burgeoning Economies of Asia 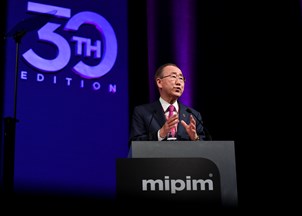 Among the most respected and well-known statesmen of his generation, BAN KI-MOON has nearly four decades of experience in foreign affairs, unparalleled insights into the inner workings of global developments, and extensive experience working with top decision-makers worldwide. Named a Top 100 Global Thinker by Foreign Policy and a recipient of France's Legion of Honour, Ban has been sought-out to speak everywhere from The World Economic Forum to We Day on topics such as climate change action, trade and the economies of Asia, and navigating the new global landscape. Recently named chair of the Global Commission on Adaptation along with Bill Gates and CEO of the World Bank Kristalina Georgieva, Ban will work to catalyze a global movement to bring scale and speed to climate adaptation solutions. Ban also serves as President and Chair of the Global Green Growth Institute, Chairs the International Olympic Ethics Commission, and is Founder of the Ban Ki-moon Centre for Global Citizens. 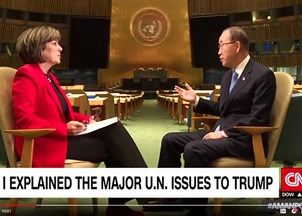 Ban Ki-Moon in the news 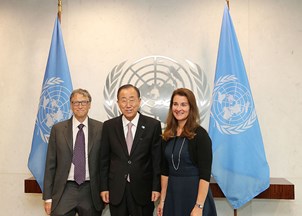 Ban Ki-Moon is a leading voice on the environment

Among the most respected and well-known statesmen of his generation, BAN KI-MOON's legacy as Secretary-General is marked by putting the environment at the top of the agenda. Ban played a crucial role in galvanizing wide support for the historic Paris Agreement on climate change, getting it signed and ratified by 175 countries including the United States and China in less than one year, and also launched the UN's Sustainable Development Goals.Thanks to his diplomatic work on climate change, Ban was named a Top 100 Global Thinker by Foreign Policy and received France's Legion of Honour. Recently named President of the Assembly and Chair of the Global Green Growth Institute, since leaving the United Nations Ban has remained a vocal leader on sustainable development worldwide. He made headlines for his interview with the Thomson Reuters Foundation on how world leaders must show a renewed commitment to tackling climate change, and was named chair the Global Commission on Adaptation along with Bill Gates and CEO of the World Bank Kristalina Georgieva. Formed in the wake of the news that widespread environmental degradation will ensue if drastic steps are not taken to halt climate change, the commission will work to catalyze a global movement to bring scale and speed to climate adaptation solutions. News of the commission made headlines in Business Insider, National Geographic, Business Standard, and more, as it embarks on an ambitious two-year plan that involves one year researching and developing the best ways to deal with life in a warmer world, and a "year of action" where the ideas will be put into practice worldwide. At events worldwide, Ban translates his tremendous experience into an inspiring and powerful call to action. His engagements regularly receive rave reviews, such as: "The program was fantastic!...SG Ban [was a] highlight." (SAP)

You can watch some of BAN KI-MOON's talks here. 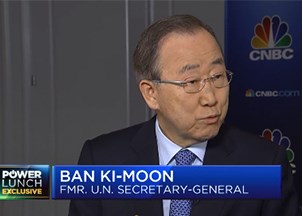 Former Secretary-General of the United Nations, BAN KI-MOON made headlines after delivering keynotes at three prestigious events: the Barclays Asia Forum; #WalkTogether, a global health gathering; and CME Group’s Global Financial Leadership Conference. During “A Conversation with Secretary-General Ban Ki-moon” at the Barclays Asia Forum, Ban addressed a crowd of over 600 delegates, sharing key insights on rising tensions with North Korea, global security, and potential policy stances and their implications from the United States and China. While at the Forum, he was also sought-out for his candid analysis in an exclusive interview with CNBC.  Just one week later, Ban took the stage at #WalkTogether, an event organized by global leaders on health, and made headlines in The Guardian, thanks to his powerful and urgent message on passing universal healthcare.  Lastly, he delivered an informative keynote on “The Imperative of Global Leadership” at the Global Financial Leadership Conference, focusing on climate change and global terrorism. Drawing on his wealth of experience pushing key policy through at the top levels of global governance, Ban is consistently heralded for infusing his remarks with relevant insights and passion, receiving such praise as: “The program was fantastic!...SG Ban was a highlight” (SAP).

Ban Ki-moon was the eighth Secretary-General of the United Nations, serving two consecutive terms, from 1 January 2007 to 31 December 2016.

As Secretary-General, he focused on mobilizing world leaders around a set of new global challenges, from climate change and economic upheaval to pandemics and increasing pressures involving food, energy and water. He also galvanized partners from non-governmental organizations, faith groups, the business community and others active on the international stage, endeavouring to build bridges, give voice to the world’s poorest and most vulnerable people, and strengthen the United Nations.

Born in the Republic of Korea, Mr. Ban’s childhood was scarred by war. Fighting forced his family to flee to the mountains. When they returned, Mr. Ban learned, first-hand, the value of the UN’s life-saving relief aid. “That experience was a big part of what led me to pursue a career in public service,” he once said, pledging to enable the United Nations to provide tangible, meaningful results that advance peace, development and human rights.

One of the Secretary-General’s first major initiatives was the 2007 Climate Change Summit, followed by extensive diplomatic efforts that have helped put the issue at the forefront of the global agenda. His visits to hard-hit areas around the world, persistent advocacy on the issue and even a march through the streets of New York for climate action helped to push the world to act. The Paris Agreement on Climate Change, adopted in December, 2015, was signed by a record number of leaders the following April 22nd – Mother Earth Day – and entered into force on 4 November.

He also worked to advance the world’s main anti-poverty targets, the Millennium Development Goals, with a special emphasis on Africa and women’s and children’s health. At the height of the food, energy and economic crises in 2008, the Secretary-General successfully appealed to the G20 for a $1 trillion financing package for developing countries and took other steps to guide the international response and protect the vulnerable and poor.

Mr. Ban pressed successfully for the creation of UN Women, a major new agency that consolidates the UN’s work in this area. His advocacy for women’s rights and gender equality has also included the UNiTE to End Violence against Women campaign, the "Stop Rape Now" initiative, the creation of a Network of Men Leaders and the establishment of a new Special Representative on Sexual Violence in Conflict. Within the UN itself, he increased the number of women in senior management positions to their highest level in the Organization’s history.

Ban Ki-moon has sought to strengthen UN peace efforts, including through the New Horizons peacekeeping initiative, the Global Field Support Strategy and the Civilian Capacity Review, a package of steps to improve the impact of the 120,000 United Nations "blue helmets" operating in the world’s conflict zones. A mediation support unit, along with new capacity to carry out the Secretary-General’s good offices, have been set up to help prevent, manage and resolve tensions, conflicts and crises. Accountability for violations of human rights has received high-level attention through inquiries related to Gaza, Guinea, Pakistan and Sri Lanka, legal processes in Lebanon and Cambodia, and advocacy for the "responsibility to protect," the new United Nations norm aimed at prevent and halt genocide and other grave crimes. A critical self-examination of United Nations failures led to the creation of the Human Rights Up Front initiative. It aims seeks to bring the UN System together in a way that is mutually supportive, helps prevention, and prioritizes human rights. He has also sought to strengthen humanitarian response in the aftermath of mega-disasters.

Mr. Ban has sought to rejuvenate the disarmament agenda through a five-point plan, efforts to break the deadlock at the Conference on Disarmament and renewed attention to nuclear safety and security in the aftermath of the tragedy at the Fukushima Daiichi Nuclear Power Plant. He also joined others in a successful push for the adoption of the Arms Trade Treaty, regulating the international trade in conventional arms – from small arms to battle tanks, combat aircraft and warships.

The Secretary-General has introduced new measures aimed at making the United Nations more transparent, effective and efficient. These include heightened financial disclosure requirements, compacts with senior managers, harmonization of business practices and conditions of service, the adoption of International Public Sector Accounting Standards, and continued investments in information technology and staff development.

The Secretary-General was born in the Republic of Korea on 13 June 1944. He received a bachelor's degree in international relations from Seoul National University in 1970. In 1985, he earned a master's degree in public administration from the Kennedy School of Government at Harvard University.

At the time of his election as Secretary-General, Mr. Ban was his country's Minister of Foreign Affairs and Trade. His 37 years of service with the Ministry included postings in New Delhi, Washington D.C. and Vienna, and responsibility for a variety of portfolios, including Foreign Policy Adviser to the President, Chief National Security Adviser to the President, Deputy Minister for Policy Planning and Director-General of American Affairs.

Mr. Ban’s ties to the United Nations date back to 1975, when he worked for the Foreign Ministry's United Nations Division. That work expanded over the years, with assignments that included service as Chairman of the Preparatory Commission for the Comprehensive Nuclear Test Ban Treaty Organization and Chef de Cabinet during the Republic of Korea's 2001-2002 presidency of the UN General Assembly. Mr. Ban has also been actively involved in issues relating to inter-Korean relations.

Ban Ki-moon and his wife, Madam Yoo (Ban) Soon-taek, whom he met in high school in 1962, have one son, two daughters and three grandchildren.

Since 2007, Mrs. Ban has devoted her attention to women’s and children’s health, including autism, the elimination of violence against women, and the campaign to prevent mother-to-child transmission of HIV/AIDS.