A philosopher of life, Yossi Ghinsberg is a man of passion, fixed resolve and a connector of people. He believes that nothing promotes growth more than an unexpected experience and unconventional thinking. In these times of great challenge and change, his “Power to Survive” message is timely.

Not many living people know that survival is a choice as deeply and intimately as Yossi Ghinsberg. Having been lost for three weeks in the depths of the uncharted Amazon, in the midst of a raging rainy season, without companionship, food, weapon or fire, he survived against all odds. The most important thing he learned from this experience was that we all have the power to survive.

Please send me availability & fees for Yossi Ghinsberg
Thank you for your interest in this Harry Walker Agency speaker.
You will hear from one of our agents in the next 24 hours. If you have any other questions or information, please call us right away at 646.227.4900. Are you also interested in learning more about other speakers? Create a My Speaker List.
Rave Reviews About Yossi Ghinsberg
“
Yossi Ghinsberg spoke at the Leadership Conference of the Aditya Birla Group. Narrating his experiences of fighting nature's wrath all by himself while lost in the depths of the Amazon left each one of us awestruck. Strength, a positive bent of mind and the hunger to survive is what Yossi exudes, all equally important qualities for survival in the Corporate world. His simplicity in recounting his Amazon tales sans a fraction of fear, speaking straight from his heart left everyone humbled for this great gift bestowed on us called 'life'. The Aditya Birla Group is grateful to Yossi Ghinsberg for having eloquently shared his survival experiences from the Amazon and thereby making a positive difference to each individual present that day, in encouraging them to treasure their special life. He was truly moving and yet inspirational.

Yossi’s ‘Amazon Survival Skills for Business’ is a mesmerizing storytelling session that will keep audiences riveted to the edge of their seats. However, this total absorption facilitates also a deep learning experience. Yossi’s counter-intuitive insights will expand horizons, open new dimensions an ...

Yossi’s ‘Amazon Survival Skills for Business’ is a mesmerizing storytelling session that will keep audiences riveted to the edge of their seats. However, this total absorption facilitates also a deep learning experience. Yossi’s counter-intuitive insights will expand horizons, open new dimensions and facilitates new possibilities.

What can be learned from a man who survived against all the odds in the Amazon Jungle?

Yossi Ghinsberg is a master storyteller with an epic story to share. Lost alone in the midst of the Amazon rainforest for three weeks, he not only survived, he found new meaning for his life and work. The author of the international bestseller Jungle, a major motion picture starring Daniel Radcliffe, Yossi was recently rated as one of the top ten speakers in the business.

His survival skills for business are designed to shift your attendees’ perspective and inspire them to always assume responsibility, taking their game to the next level. His energy is contagious – his insights mind-bending and counter-intuitive.

The Power to Survive

“Adversity is part of life; being a victim is a matter of choice.” Yossi Ghinsberg’s amazing true story of survival is a timeless metaphor for how to face up to the challenges and uncertainties of every day life. After being separated from his friends, Yossi wandered lost and alone ...

“Adversity is part of life; being a victim is a matter of choice.” Yossi Ghinsberg’s amazing true story of survival is a timeless metaphor for how to face up to the challenges and uncertainties of every day life. After being separated from his friends, Yossi wandered lost and alone for three weeks in the heart of the Amazon. He managed somehow to survive, even with no food or weapons and during what was the worst rainy season in decades, until he was miraculously saved. Yossi’s message is always timely and always appropriate - for any group, anywhere. He speaks to what it means to be human, and shows us how we all possess the power to survive, even in the most extreme situations. His message is inspiring and hopeful leaving his audiences uplifted and empowered.

Passionate and positively charged with contagious optimism and original ideas, this latest keynote from Yossi Ghinsberg recounts a story of the tremendous power to create a new reality and change the world. The WEvolution Revolution is the story of Yossi's amazing adventure of building 'Chalalan', ...

Key messages related during this talk:

Get ahead of the curve with this keynote on the trends and values of the emerging new, post-GFC world.

The Laws of the Jungle

Jaguars Don’t Need Self-help Books: A master practitioner of corporate spirituality, Yossi Ghinsberg introduces this pioneering work of incorporating principles and guidelines from nature…the natural world…the planet as a whole and the cosmos and draws their relation to the manag ...

Jaguars Don’t Need Self-help Books: A master practitioner of corporate spirituality, Yossi Ghinsberg introduces this pioneering work of incorporating principles and guidelines from nature…the natural world…the planet as a whole and the cosmos and draws their relation to the management of our personal and professional lives. Audiences are intrigued by the unique cutting-edge human thinking that provokes and challenges the conventional, suggesting an alternative outlook on life and a new path of action toward wellbeing and success. Empowering and encouraging, Ghinsberg’s ‘Laws of the Jungle’ teaches: we are the co-creators of this life; assuming responsibility yields power; what we resist persists; and casting our vision upon the future forms a new path. 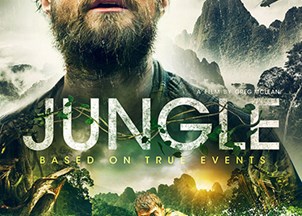 YOSSI GHINSBERG is most known for his survival story when he was stranded in an uncharted part of the Bolivian Amazon jungle for three weeks in 1981. Ghinsberg’s survival story is enacted in the psychological thriller Jungle starring Daniel Radcliffe as Ghinsberg.  A group of friends trek into the Bolivian jungle with a fraudulent guide.

Ghinsberg, a tech-entrepreneur and founder of Headbox and Blinq, was born and raised in Tel Aviv, Israel. His parents were Holocaust survivors. When he was 18, he joined the Israeli Navy as part of mandatory military service. When Ghinsberg was 21, he encountered a life-changing near-death experience in the Amazon jungle. Yossi Ghinsberg is the international bestselling author of Jungle, a true story of survival against all odds in the Amazon rainforest that has sold over one million copies and is the subject of an episode of the Discovery Channel's I Shouldn't Be Alive series. The book the Los Angeles Times called, "a powerful story" and The Washington Post described as a, "thrilling book" is also now a feature film in production.

A natural storyteller, Yossi is an accomplished business motivational speaker who has been hired to address audiences at such organizations as BP, Citibank, Qantas, IBM, Hilton, BMW, Proctor & Gamble, Fuji, Xerox, Telstra and Bayer. He skilfully captures the imagination of his listeners as he brings his message of triumphing over adversity from the wilds of the Amazon to the corporate environment.

When he speaks to groups at corporate events and business meetings, Yossi draws from his rich life experience as a daring explorer, survivor and visionary entrepreneur. He speaks from the heart of his harrowing experiences in the rainforest and courage to take risks in his professional life, sharing personal insight that is as riveting as it is deeply transformative.

Yossi grew up in Tel Aviv. He served his mandatory three years of military service in the Israeli navy, during which time he lived with tribal Bedouins in the Sinai Desert. He later studied business and philosophy in academic and authentic environments. Ten years after almost losing his life during his memorable trip in the Amazon, Yossi returned to the Amazon River valley that was the site of his remarkable adventure and made it his home. He was instrumental in the creation and construction of Chalalan Ecolodge, a model eco-tourism village that inspires the Amazon basin and the world to this day.

During this time Yossi organized two national reunions of all indigenous groups to inform them on issues of intellectual property and their rights and roles in the fight over resources in the Amazon. His efforts and work contributed to the creation of the Madidi National Park, the largest biosphere conservation belt in Bolivia.

The next phase of his life was spent in what Yossi aptly terms the 'field of agony,' when he dedicated seven years to the treatment, rehabilitation and reintegration of opiate addicts throughout the world.

In addition to publishing his books Jungle and Laws of the Jungle, Yossi has initiated various business ventures and been involved in grassroots efforts for reconciliation and healing in the Middle East. In recent years Yossi operated an interior and landscape design label called collecteco to represent his commitment to ecology, connection to nature and respect for indigenous cultures.

Yossi is currently co-founder and CEO at Blinq.me, a Silicon Valley based start-up company financed by 500 Startups acceleration Micro Fund. Blinq is an innovative mobile solution that with one touch brings social updates from across social media platforms about any contact so you enter into every dialogue with confidence.

Yossi is married to Belinda and father to four children: Mia, Cayam, Nissim and Shalem. They live in Israel, Australia and the USA.