Coach, sportscaster, Emmy Award-nominated filmmaker, podcaster, and New York Times bestselling author Yogi Roth is known for his relentless positivity, vital insights about the role of masculinity in sports, and powerhouse motivational keynotes. After coaching college football, he co-authored the New York Times bestseller Win Forever with Pete Carroll and his memoir From PA to LA. He is currently the lead analyst for the Pac-12 Network and has also worked as host and analyst for ESPN, FOX, and as a correspondent for CBS’ Entertainment Tonight, and has hosted the Elite 11 on ESPN, Bleacher Report, the NFL Network, and YouTube. A gifted storyteller, he has executive produced and hosted The CW’s All American Stories, and produced and directed numerous documentaries with the NFL Films, Bleacher Report, and ESPN, as well as the docuseries ProtectHer. A prolific creative, Roth has produced or directed numerous documentaries, including the Emmy-nominated Keep Climbing: 2013 Elite 11 and the LA Emmy Award-winning feature Fight On: A Jackson Family. He was the co-founder of Win Forever, which was dedicated to developing coaches hone their coaching philosophy. He is a gifted speaker, sharing insights about how finding our unique story can help us make an impact in our lives, communities, and the world.

Roth is an in-demand speakers for events with Nike, World Surf League, JC Penny, Dignity Health, IMG College, Capital One, the TEDx Austin Women’s Conference, and many more, and he spoke at the SXSW Festival addressing masculinity in sports. He hosts the podcast The It Factory: Pac-12 Football, where he interviews esteemed guests about their journeys to success, and co-hosted Season of Sam. He partnered with One World Play Project as a Story Ambassador, celebrating teams that demonstrate resiliency, and is the cofounder of Win Forever, which is dedicated to developing coaching philosophy. Roth inspires individuals and organizations to explore their potential, and maximize it by striving together to achieve goals. 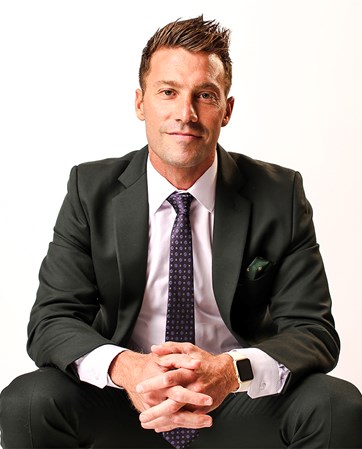 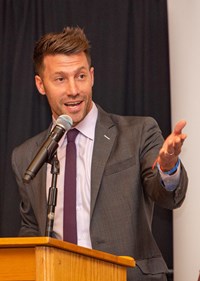 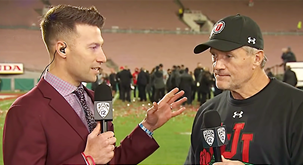 Please send me availability & fees for Yogi Roth
Thank you for your interest in this Harry Walker Agency speaker.
You will hear from one of our agents in the next 24 hours. If you have any other questions or information, please call us right away at 646.227.4900. Are you also interested in learning more about other speakers? Create a My Speaker List.
Rave Reviews About Yogi Roth
“
It was a privilege and an honor to have Yogi Roth present as our keynote speaker. His speech was riveting. Yogi’s zest for life, his enthusiasm, his passion are all contagious. His ability to drive home the need for personal and organizational introspection is second to none. From Life in a Walk, to the Napkin Project, to Elite 11, to his playing and coaching career, to his commentating career, and on and on, Yogi demonstrated the range that only few could imagine in their dreams let alone live out in real life. What does it mean to be human? Yogi knows!

In life, and specifically life on social media, we are often told who we are by other voices, tweets & many who do not know the essence underneath our ‘uniform.' Once we get to know our ’story’ we can represent ourselves in our purest form and use various platforms to share who we are and what w ...

In life, and specifically life on social media, we are often told who we are by other voices, tweets & many who do not know the essence underneath our ‘uniform.' Once we get to know our ’story’ we can represent ourselves in our purest form and use various platforms to share who we are and what we want our impact on the world to be. Yogi Roth, who has worked in college football for over 20 years and won various storytelling awards, will guide you toward finding the starting point in your story and putting it together to support your dreams.

The word ‘compete’ is often described as ’striving against’ an opponent but the Latin root of the word means to ’strive together.’ Where did we go wrong? How do we view our competitive world and our competitive story? Yogi Roth learned from one of the words elite competitors, Pete Carroll, and with ...

The word ‘compete’ is often described as ’striving against’ an opponent but the Latin root of the word means to ’strive together.’ Where did we go wrong? How do we view our competitive world and our competitive story? Yogi Roth learned from one of the words elite competitors, Pete Carroll, and with that foundation has helped countless companies, universities and high performing individuals explore their potential and maximize it in their competitive culture. 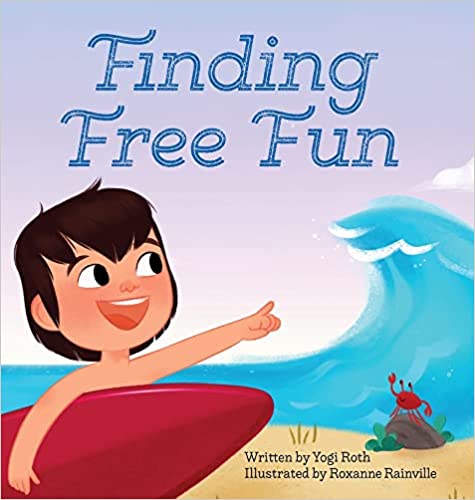 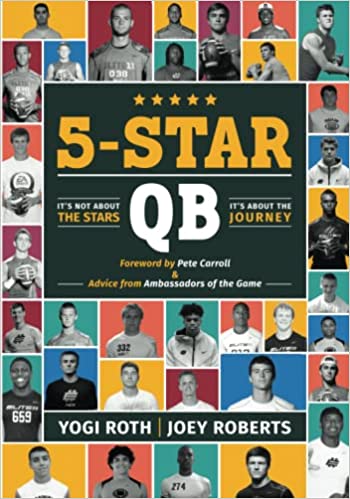 5-STAR QB: It's Not About the Stars, It's About the Journey 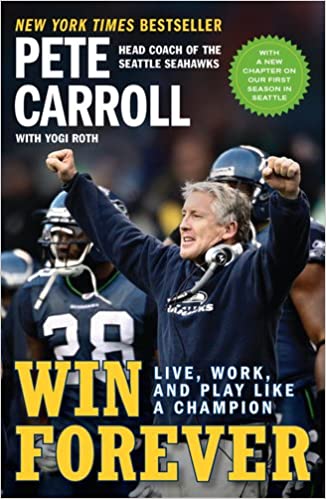 Win Forever: Live, Work, and Play Like a Champion 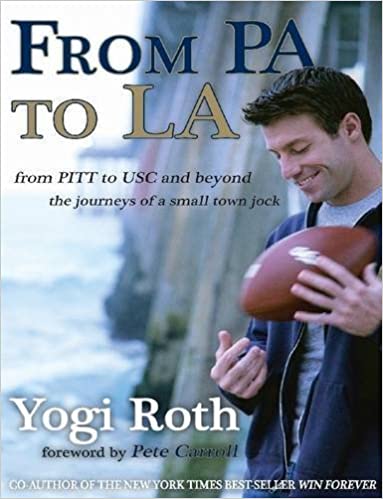 From PA to LA

Yogi Roth is a storyteller: seeking and uncovering the humanity in sports around the globe. A Pac-12 Networks college football analyst, Emmy award-winning Filmmaker, Scholar, New York Times Bestselling Author, accomplished Coach, Motivational Speaker, Media Personality, Host and World-Traveler. Over the past 20 years Yogi has been driven by the power of sports and story.

Yogi began his storytelling career after coaching football at USC, co-authoring the New York Times best-seller Win Forever with Pete Carroll, as well as his second book, From PA to LA. As a filmmaker, he recently executive produced and hosted All American Stories on the CW and has produced or directed multiple documentaries with the Pac-12 Networks, NFL Films, Bleacher Report, and ESPN, including the Emmy-nominated film Keep Climbing: 2013 Elite 11, and the award-winning film Life In A Walk. Recently, he was an executive producer on the educational documentary series ProtectHer, as well as directed and wrote the short films What Does It Mean to be Human?, What Does It Mean to Love? and What Does It Mean to Connect?. He also created and hosted the digital documentary series, We All Speak Ball, which chronicled American football in Israel in 2017. At the Pac-12 Networks Yogi has produced and narrated the award-winning documentary series, The Drive, since 2013. In 2020, he won a Los Angeles Emmy on behalf of the Pac-12 Networks for the feature titled Fight On: A Jackson Family. In 2017, he partnered with One World Play Project as a ‘Story Ambassador,’ where he gives away the most resilient soccer ball in the world to individuals and teams who also reflect resiliency. His most recent film, The Cape, will release in 2022.

As a media personality, Yogi has been a host/college football analyst for ESPN, Fox, and the Pac-12 Network, as well as a correspondent for Entertainment Tonight on CBS and beach volleyball on TBS for the last decade. In 2017, he co-hosted the podcast Season of Sam with USC and NFL quarterback Sam Darnold. In 2018, Yogi signed a deal with Sirius XM radio, in addition to his podcast The It Factory, where he interviews Pac-12 football players, alums and esteemed guests to learn more about their journey toward success on Saturdays on the Pac-12 Network. He has also hosted the Elite 11 since 2009 on ESPN, Bleacher Report, NFL Network and YouTube.

Yogi, who gave a TEDx Talk at the TEDx Austin Women’s Conference, has spoken around the globe alongside brands such as Nike, World Surf League, JC Penny, Dignity Health, PMK*BNC, IMG College, USC, UW, Oregon, Gonzaga, and Capital One. In 2018 Yogi spoke at the SXSW Festival addressing masculinity in sports. Yogi also joined the Pac-12 Conference task force, formed to protect student athletes and address systemic issues threatening college athletics. In 2020, he added to his role within the Pac-12 conference as a lead role in football communications and strategy.

He was also the co-founder of Win Forever, LLC with Pete Carroll, which was a company dedicated to coaching coaches on the development of a philosophy.

As an actor Yogi has appeared on Comedy Central, multiple national commercials, and in various independent films.

An explorer of over 30 countries, Yogi enjoys unplanned adventures, surfing, and a local latte.