Troy Aikman is one of the most recognizable and accomplished personalities in sports and beyond, as a Pro Football Hall of Fame quarterback, Emmy nominated broadcaster, philanthropist, and serial entrepreneur. Aikman is the new voice of ESPN's Monday Night Football alongside Joe Buck. Together with Buck, Aikman is part of the second-longest broadcast tandem in NFL history — his voice has become synonymous with the game. Aikman harnesses his tenacity, drive, and likeability from the field and brings it to every project and partnership off the field.

An empowering and insightful speaker, Aikman engages audiences with conversations about how to identify (and maximize) the individual assets of members on any team, how to use unexpected change and setbacks to grow, what he learned from the struggles and triumphs of his football career, and more.

In Conversation with Troy Aikman

NFL Hall of Famer, Emmy Award-nominated sportscaster, and entrepreneur Troy Aikman is an empowering and insightful speaker, engaging audiences in a moderated conversation about leadership, identifying and amplifying your strengths, as well as honing a winner’s mindset when it comes to pivoting towar ...

NFL Hall of Famer, Emmy Award-nominated sportscaster, and entrepreneur Troy Aikman is an empowering and insightful speaker, engaging audiences in a moderated conversation about leadership, identifying and amplifying your strengths, as well as honing a winner’s mindset when it comes to pivoting toward new opportunities in business and in life. 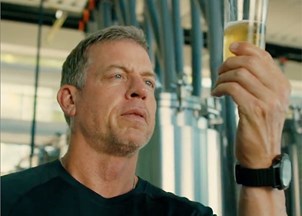 Troy Aikman is breaking into the business world

NFL Hall of Famer and Emmy Award-nominated sportscaster TROY AIKMAN is making headlines with his savvy business ventures, from his endorsement-turned-ownership of the popular chain restaurant Wingstop to the launch of his light lager, Eight. Named for his former jersey number, the launch of the low-carb, low-calorie beer was the culmination of a two-year creative process, informed by Aikman’s summer job during college at a beer distributor. As he shared on social media in celebration of the launch, “excited to finally share this project with y’all. It’s been 2 years in the making with a lot of hard work and dedication. I hope you enjoy it as much as I do.” Aikman continues to expand his post-NFL endeavors, establishing himself as a leader across industries.

Following a legendary career with the Dallas Cowboys, Aikman harnessed his drive and dedication to pivot toward broadcasting, business investments, and philanthropy, with The Troy Aikman Foundation, which Aikman transformed into a $1M donor-advised fund for the United Way Campaign – the first alignment of its kind. Known for his accurate and entertaining coverage with NFL on FOX as an analyst, he brings the same candor, consistency, and insight when engaging audiences. Aikman shares practical takeaways about leadership through setbacks, identifying and amplifying your strengths, as well as honing a winner’s mindset when it comes to pivoting toward and embracing new opportunities in business and in life.

Troy Aikman, Pro Football Hall of Fame quarterback, Emmy nominated broadcaster, and serial entrepreneur, is the new voice of ESPN’s Monday Night Football. Before joining ESPN, Aikman joined FOX as an NFL game analyst and was the lead game analyst for over 20 years. Aikman is part of the second-longest broadcast tandem to call NFL games. Aikman has harnessed his tenacity, drive, and dedication from the field to the broadcasting booth; and to numerous successful business ventures. Aikman recently announced the launch of his latest business venture in January 2022, EIGHT, a great-tasting elite light beer brewed with organic grains.

Since 1992, he has run The Troy Aikman Foundation, which builds playhouses for children's hospitals. These "Child Life Zones" provide an interactive and therapeutic space for pediatric patients to interact with other kids at Children's Hospitals across the country. Aikman, alongside Roger Staubach, has been the honorary co-chairs of the Children's Cancer Fund Gala for over twenty years. Children's Cancer Fund (CCF) champions kids in their fight against cancer through strategic investments in research and care in North Texas.

After Henryretta, Oklahoma was hit hard by the pandemic, Aikman wanted to give back to his hometown. In June 2022, Troy Aikman's Highway to Henryetta, debuted at Nichols Park. Headlined by Blake Shelton, the one-day music festival raised raise money to benefit educational and community initiatives throughout the town.

Prior to launching EIGHT, Aikman dove into the restaurant industry in 2018 and opened Troy's, a beer hall and eatery in the sports-focused city of Arlington. He is also a former joint owner of the NASCAR Sprint Cup Series racing team, Hall of Fame Racing, and was a part-owner of the San Diego Padres.

After retiring in 2000, Aikman was voted into the Pro Football Hall of Fame in Canton, Ohio, in 2006, his first year of eligibility.

Before joining the Cowboys, Aikman played two seasons at the University of Oklahoma (1984-85) before transferring to UCLA. While playing for the Bruins, Aikman passed for 5,298 yards and 41 touchdowns in two years. The All-American led UCLA to a 20-4 record during that span. In 1999, he was inducted into the UCLA Sports Hall of Fame, and in 2009 entered the College Football Hall of Fame. Selected by the Cowboys with the first overall selection in the 1989 NFL Draft, he became the first rookie quarterback to start a season opener for Dallas since Roger Staubach in 1969.

Born November 21, 1966, he was raised in Cerritos, California. At the age of 12, his family moved to Henryetta, Oklahoma, where he went on to earn All-State honors at Henryetta High School. He resides in Dallas, Texas, and has two daughters, Jordan and Ally.