Few individuals ever become iconic enough to be known by one name – Shaq. A cultural icon, Shaquille O’Neal is best known for an NBA career spanning nearly two decades and earning him the sport’s highest honors including membership in the NBA Hall of Fame. He electrifies the room with his larger-than-life personality and audiences always give him standing ovations for his motivational keynote speeches. When Shaq is at your event, every seat is filled and your event gets a lot of buzz.

Please send me availability & fees for Shaquille O'Neal
Thank you for your interest in this Harry Walker Agency speaker.
You will hear from one of our agents in the next 24 hours. If you have any other questions or information, please call us right away at 646.227.4900. Are you also interested in learning more about other speakers? Create a My Speaker List.
Rave Reviews About Shaquille O'Neal
“
Shaq was a fun, energetic and motivating speaker that exceeded our expectations. He did an exceptional job at engaging our audience and delivering a message that applied to our business.

Play
Now
In conversation clip - Meet the Man Behind the Superstar [2:20]

How to "Shaq-ify" your life and your business for Health, Wealth and most importantly, Happiness

Few individuals ever become iconic enough to be known by one name. A NBA Hall of Famer, 15-Time NBA All Star Player, entrepreneur, philanthropist, and true cultural icon, Shaquille O’Neal brings his inspiring story to life in this dynamic program. Chock-full of empowering lessons on leadership, pers ...

Few individuals ever become iconic enough to be known by one name. A NBA Hall of Famer, 15-Time NBA All Star Player, entrepreneur, philanthropist, and true cultural icon, Shaquille O’Neal brings his inspiring story to life in this dynamic program. Chock-full of empowering lessons on leadership, personal (and hilarious) anecdotes, and actionable insights into resilience and teamwork, this program seamlessly weaves story-telling and audience engagement to create a one-of-a-kind audience experience. High-energy, Shaq electrifies the room with his larger-than-life personality and audiences always give him standing ovations. When Shaq is at your event, every seat is filled and your event gets a lot of buzz. 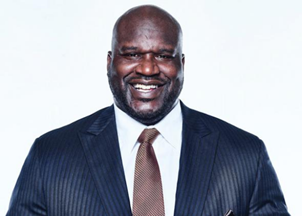 Speaker Spotlight: Shaquille O’Neal is a slam dunk for your next event

NBA superstar, philanthropist, and renowned successful business entrepreneur SHAQUILLE O’NEAL – known around the world as Shaq – is a true cultural icon who brings his inspiring story and unbeatable lessons in leadership and business to life at every smash-hit event. After spending nearly two decades racking up accolades in the NBA (15x NBA All-Star, 4x NBA Champion, and a 3x NBA Finals MVP), Shaq is heralded for his tremendous business savvy – he got his MBA back in 2005 – and his insights and advice on business success and diversification have been featured in Forbes, Inc., Entrepreneur, Money, and more. O’Neal has become a bona fide mogul, investing in companies like Google, Apple, and Ring, and becoming the second-largest individual shareholder of Authentic Brands Group, as well as franchising storefronts like Five Guys, Auntie Anne’s, and Krispy Kreme, among a myriad of notable entrepreneurial ventures. Chock-full of empowering and actionable insights on leadership, resilience, and teamwork, as well as personal (and hilarious) anecdotes, he creates a one-of-a-kind audience experience.

O’Neal is a household name for his legendary athletic career, impeccable business acumen, and undeniable place in pop culture, from his hit show on TNT Shaq Life, which documents his passion for trying new things like DJ-ing and MMA, his love for his family, and his savvy management of multiple business ventures; to his weekly show The Big Podcast for Turner Sports, which covers current events, entertainment, and sports with O’Neal’s signature hilarity and larger-than-life personality. He repeatedly brings the house down at events virtually and in person, and rave reviews pour in from hosts and audiences alike. He has been sought-out to share his business and leadership insights everywhere from Deutsche Bank to CareerBuilder, each time receiving rave reviews such as: "Shaquille was extraordinary. His remarks were motivating, inspirational and at times, hilarious. He was also a pleasure to work with and a class act in every respect. Out of all the speakers we have had, Shaquille was my favorite!" (Robbins Geller Rudman & Dowd LLP)

A man who needs no introduction - SHAQUILLE O’NEAL, known around the world as Shaq - spent nearly two decades as a star in the National Basketball Association, but he makes more money in retirement than he ever did playing professional basketball.

Since leaving the NBA, O’Neal has become a bona fide mogul, investing in companies like Google, Apple, and Ring, and becoming the second-largest individual shareholder of Authentic Brands Group, the company behind dozens of brand and retailer acquisitions (such as Forever 21, Barneys New York, and Reebok). He has been extending his likeness to advertise for brands like The General Insurance, Papa John’s, and Carnival Cruises; franchising storefronts like Five Guys, Auntie Anne’s, and Krispy Kreme; and even creating and selling his own line of Shaq-branded products – Shaq shoes, Shaq suits, Shaq jewelry, and even a Little Shaq children’s storybook. In addition to his formal business endeavors, O’Neal serves as a regular NBA analyst on Inside the NBA and has earned a Doctorate in Education from Barry University.

Heralded for his tremendous business savvy, is insights on business success and diversification have been features in The Wall Street Journal, Forbes, Inc., Entrepreneur, Money, and more. O’Neal credits his success to investing in companies that he believes will change the world, and explains to listeners how they can do the same. His entrepreneurial wisdom is featured in Turner Sports new docu-series The Game Plan, which highlights Atlanta businesses following his ‘game plan’ for success. Shaq speaks to audiences and provides them with entertainment and laughs, as well as sound, actionable business advice. Having Shaq at your next event is a huge deal (and not just because he is over 7 feet tall) and will certainly draw a crowd. 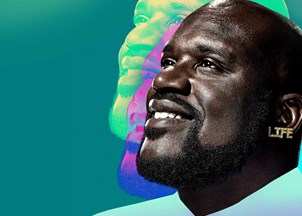 VIRTUAL PROGRAMMING: Bring 'Shaq Life' to your next virtual engagement

Few individuals ever become iconic enough to be known by one name. A true cultural icon and renaissance man, SHAQ shares his life and passions off the court in TNT's new hit show "Shaq Life." From spending a busy summer touring the world to establish himself as a DJ; navigating his partnership with a controversial franchise; training with UFC fighters for his first-ever MMA grappling match; raising six children and expanding his legacy, audiences get to meet the man behind the legend and to experience Shaq's legendary sense of humor, enormous heart and endless determination. Shaq brings the same winning combination on display in "Shaq Life" to virtual and live engagements, offering up empowering and actionable insights on leadership, resilience, and teamwork, and personal (and hilarious) anecdotes that create a one-of-a-kind audience experience. In fact, Entrepreneur Magazine, captured better than most with the headline, Want Millions of Views for Your Virtual Event? Just Add Shaq and Gronk.  Whatever your event, if Shaq is there there will be millions of views. At virtual and in-person events, he teaches audiences how to "Shaq-ify" their life and business for health, wealth and happiness. Amid the coronavirus, Shaq has been all over social media-- encouraging everyday people and student-athletes to stay healthy and active while practicing social distancing. He hosted an Instagram Live, partnered with IcyHot, on how to stay active at home, and showed off his at home DJing, work-out routine with his sons, and answered fan Q&A. 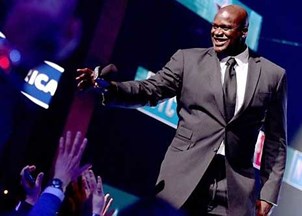 Few individuals ever become iconic enough to be known by one name. A true cultural icon, SHAQ brings his inspiring story and powerful leadership lessons to life at every smash-hit event. Chock-full of empowering and actionable insights on leadership, resilience, and teamwork, as well as personal (and hilarious) anecdotes, Shaq creates a one-of-a-kind audience experience. Shaq brought the house down at a recent RCLA Town Hall Lecture for an audience of nearly 2,000, garnering praise in media outlets such as the following headline from the Miami Herald: "Shaquille O’Neal is still drawing standing ovations. He got one Wednesday in Sarasota"A regular on The Tonight Show with Jimmy Fallon, thanks to his one-of-a-kind sense of humor, Shaq electrifies the room with his larger-than-life personality at every engagement. When he addressed a packed audience of 18,000 at Cisco's GSX Annual Sales Conference, he inspired tweets of praise such as: "My BIGGEST takeaway from #CiscoGSX came via @SHAQ - 'As soon as you become the STRONGEST at anything, the more you need to find ways to get STRONGER-never be complacent'; "Shaq (!) at Cisco! Suuuper fun closing session with some inspiration too!" ; "@SHAQ at #CiscoGSX! Doesn’t get better than this! My stomach hurts from the effortless banter. #awesome#WeAreCisco."

Watch some of SHAQ's talks here  >> 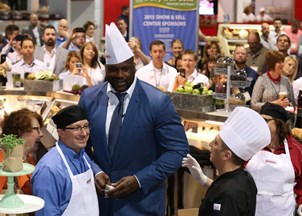 Shaq keeps the tweets of praise rolling in at every event

Legendary athlete, entrepreneur, media personality, and philanthropist SHAQUILLE O'NEAL keeps audiences tweeting praise throughout each of his slum-dunk engagements. Balancing hilarious and riveting personal anecdotes, powerful lessons on leadership and personal performance, and one-of-a-kind interactive components (like helping a CEO dunk at one recent engagement), Shaq is heralded for his humility, humor and infectious energy. Here is a small sample of the many tweets from audience members during recent events: "@SHAQ has the room wrapped around every word. The room is falling over with laughter... Brilliant speaker & so motivational! #refresh19"; “Learned a ton today at #SGFUS. From IPO's to @SHAQ discussing giving back, pursuing dreams and raising kids. He was humble, inspiring, and motivating…”; “Awesome to have 15 time @NBAAll_Star @SHAQ share winning insights from an amazing @NBA & on-going media/business career. #Funny & #inspirational. Big man with an even bigger heart.”; “@SHAQ “Leaders create other leaders.” Thanks for inspiring this packed house of entrepreneurs.”; “Inspirational and funny discussion with @SHAQ on leadership and no regrets (except Kazaam.) @EY_Growth.”