Robyn speaks over 100-times-a-year across various audiences and industries. She does an excellent job of tailoring the content for her audience and theme while delivering an authentic and energizing talk. The toughest of audiences still end up high fiving at the end of her presentations. Her content and stories are not only inspiring and practical but also have applications in Leadership, Innovation, Change, Sales, Teamwork, and Overall Business Inspiration. 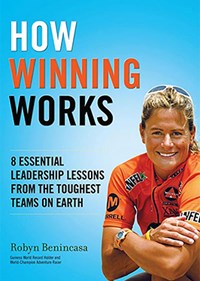 Please send me availability & fees for Robyn Benincasa
Thank you for your interest in this Harry Walker Agency speaker.
You will hear from one of our agents in the next 24 hours. If you have any other questions or information, please call us right away at 646.227.4900. Are you also interested in learning more about other speakers? Create a My Speaker List.
Rave Reviews About Robyn Benincasa
“
Words really can't describe how amazing your presentation was today. Your commitment towards TEAMWORK is truly inspirational.The positive feedback was overwhelming. Not only did so many people come up to me after you spoke, but I also received a ton of e

Change is the only thing that stays the same. It is our response to that change that dictates our success. How do the world’s most consistently high performing leaders ALWAYS find a way to get their teammates to the finish line and achieve their goals against all odds? Are they lucky, blessed or imm ...

Change is the only thing that stays the same. It is our response to that change that dictates our success.

How do the world’s most consistently high performing leaders ALWAYS find a way to get their teammates to the finish line and achieve their goals against all odds? Are they lucky, blessed or immune to setbacks? Nope. Great leaders experience times of great turbulence, challenge and change in every aspect of their lives—but it is their attitude and mindset that carries them and their teammates to greater heights in the FACE of that change.

Leading through Change means Being Ruled by the Hope of Success versus the Fear of Failure, Embracing Setbacks as a Chance to Learn and Excel, and Never Letting the Pursuit of Perfection Hinder Progress. In her Leading Through Change keynote, Robyn shares incredible stories and videos from the worlds of adventure racing and firefighting that illustrate how great leaders succeed against all odds and triumph in the face of adversity.

Robyn’s stories and meaningful messages will not only entertain and amaze… your attendees will walk away with easily applied leadership skills that will help them shatter the norm, see challenges versus roadblocks, and inspire their teammates to once again see a future full of possibilities.

Building World Class Teams — How to achieve breakthrough performance through collaboration, creativity and a culture of ONE

How do you inspire individual team members to become great teamMATES? What if your teams were not only driven to achieve goals with each other but FOR each other? In Robyn’s most requested keynote, based on her NY Times Bestselling book, she will take you on an awe-inspiring journey that will trans ...

• What do the world’s most consistently high-performing individuals and teams have in common? How do the best and the brightest achieve great results through challenge and change? Robyn’s high-energy presentation unveils the mindset and strategies essential to inspiring yourself and your team when t ...

• What do the world’s most consistently high-performing individuals and teams have in common? How do the best and the brightest achieve great results through challenge and change? Robyn’s high-energy presentation unveils the mindset and strategies essential to inspiring yourself and your team when the goals are gigantic, the stakes are high, and change is the only thing that stays the same.
• Robyn’s interactive presentation will help you:
• ➢ Embrace times of great challenge and change as a springboard to future success
• ➢ Empower continuous improvement to elicit change and reinvent the game
• ➢ Capitalize on your “human resources” and build a world-class team to achieve even bigger goals

Inspired Leadership — Driving greatness by creating a culture of champions

• How do you inspire others to think and act with a World Champion’s mindset? What are the secrets to inspiring your team members to WANT to be great? In this power-packed keynote, Robyn will teach you how to build and retain high-performing teams that are not only motivated to succeed as individual ...

• How do you inspire others to think and act with a World Champion’s mindset? What are the secrets to inspiring your team members to WANT to be great? In this power-packed keynote, Robyn will teach you how to build and retain high-performing teams that are not only motivated to succeed as individuals but are truly inspired to cross your organization’s most challenging finish lines and take their teammates with them.
• Robyn’s interactive presentation will help your leaders:
• ➢ Transform team members into Team *builders* who achieve consistent peak performance
• ➢ Demonstrate Title-less Leadership: a counterintuitive approach to capitalizing on the strengths of all teammates in order to exceed goals
• ➢ Create Inspiration Plans: The means by which you build deep engagement to your organization’s goals by genuinely inspiring versus simply motivating

Robyn Benincasa is a top speaker on peak performance

CNN Hero, World Champion Adventure Racer, Author and leadership speaker ROBYN BENINCASA knows how to move audiences to powerful action, sharing breakthrough insights into how to build world class teams, create next-level success, and cultivate a culture of champions. Named a CNN Hero for her game-changing work and remarkable perseverance, Robyn is also the New York Times bestselling author of How Winning Works, which serves as a field guide for how to climb to new levels of professional and personal success. Sought-out to speak everywhere from Starbucks and Wal-Mart, to Boeing and Siemens, Robyn speaks over 100 times a year providing keynotes that are powerful and packed with tangible insights on how to develop a World Champion mindset and build teams that thrive against all odds.  Robyn tailors her speeches for every audience and theme while delivering content that is inspiring and practical with real life applications in leadership, innovation, teamwork and overall business inspiration.  Most recently, Robyn was named one of the Top 10 Speakers Featured by the Harvard Business Review and one of the Top 10 New York Times Bestselling Authors Who Can Better Your Company and Your Life.  Audiences can’t stop raving about her impact.  Wells Fargo said: “Words really can’t describe how amazing your presentation was today.  The positive feedback was overwhelming. I received tons of emails thanking me for having you speak.” Nestle agreed with their review saying, “We had so much fun with you.  I literally received so many compliments on your message and comments about how your talk touched people. Several said you were the best speaker they have ever heard (my opinion too, BTW!)”

A 10-time Ironman triathlete, San Diego firefighter, and 3x Guinness World Record holder, Robyn has made an art form of extreme performance, having biked through jungles in Borneo, climbed Himalayan giants in Nepal, and trekked across lava fields in Fiji. Her tremendous success is even more awe-inspiring as she is the proud owner of two bionic hips, after she was diagnosed with sage four osteoarthritis. She has taken her own personal experience and turned it into a call to action, creating the 501c3 Project Athena to help survivors of medical setbacks achieve their adventurous goals. 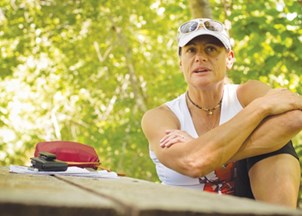 Listen to the interview here >>
Books by Robyn Benincasa How Winning Works: 8 Essential Leadership Lessons from the Toughest Teams on Earth

For the last 20 years, she and her teammates have been competing at the front of the pack in the most unique and compelling classrooms on earth--The jungles of Borneo, the Himalayan peaks of Tibet, the rivers of Fiji, the rainforests of Ecuador and the desert of Namibia, studying the good, the bad, and the not-so-pretty in Extreme Teamwork and mastering the skills required to inspire a group of semi-exhausted people through a seemingly endless series of checkpoints, in pursuit of a seemingly impossible goal, working against crazy deadlines, in constantly changing conditions and all in pursuit of a huge hairy audacious goal (sounds a lot like your life as a business leader, right?!).

It is through these harrowing, life affirming and often hilarious experiences in the world's most grueling challenges that she has emerged with her refreshing and truly unique perspective on what it takes to build the kind of world class teams that succeed against all odds, that triumph in the face of adversity and that win as one in times of great challenge and change.

NBC, ABC, CNN, ESPN, USA Network, The Today Show, Live With Regis, Dateline NBC, The Discovery Channel, Vogue, Harper's Bazaar, Runner's World and Outside Magazine have all featured Robyn and her teams' amazing accomplishments. And Robyn accepts full blame for inspiring people to do insane things like climb Mount Kilimanjaro, run their first triathlon, start their own adventure racing teams, hike across the Grand Canyon with a group of survivors, or start their own businesses.

This is, after all, who she is and what she does: Robyn Benincasa inspires people to grab life with one hand, grab their teammates with the other, and to create that special magic that makes all of us better TOGETHER than we ever would have been alone!