Olympia Snowe is recognized as a policy thought-leader in Washington. She is also an inspiration for the barriers she overcame to become one of the most powerful women in Washington. The Washington Post summed up Senator Snowe's powerful legacy as a politician, "with several historic distinctions to her name: She is the first woman in U.S. history to serve in both chambers of a state legislature and both chambers of Congress. She was the first Greek American woman to serve in Congress, the youngest Republican woman elected to the House and the first Republican woman to serve on the Senate Finance Committee."

She made the decision not to seek a fourth term in the United States Senate when she arrived at a stark reality: that the excessive political polarization in Congress would not diminish in the short term.  As a result, she joined the Bipartisan Policy Center in Washington, to take her fight for bipartisanship in a different direction.  At the BPC, she serves as a Senior Fellow where she is able to harness her insider’s knowledge to promote change from outside of Congress. 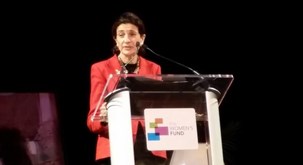 Please send me availability & fees for Olympia Snowe
Thank you for your interest in this Harry Walker Agency speaker.
You will hear from one of our agents in the next 24 hours. If you have any other questions or information, please call us right away at 646.227.4900. Are you also interested in learning more about other speakers? Create a My Speaker List.
Rave Reviews About Olympia Snowe
“
I just wanted to let you know that the event with Senator Snowe was fantastic! It was a pleasure to host her on campus and I appreciate all you did to make that happen.

Play
Now
Keynote - Fighting for Common Ground: How can we fix the stalemate in Congress? | Eagleton Institute [1:37:40]

Play
Now
In Conversation clip - Whom do we pressure for financial disclosure? | Harvard Law [3:44]

Telling It like It Is: Will Congress Rise to Meet the Great Challenge of Creating an Economic Revival?

Many of the major issues facing America have remained unresolved in Congress due to hyper-partisanship from overhauling the tax code to health care and entitlement reforms, to spending cuts and the debt reduction, to regulatory reform and immigration. As Congress fails to grapple with monumental and ...

Many of the major issues facing America have remained unresolved in Congress due to hyper-partisanship from overhauling the tax code to health care and entitlement reforms, to spending cuts and the debt reduction, to regulatory reform and immigration. As Congress fails to grapple with monumental and wide-ranging policy challenges, meanwhile American families and businesses continue to confront uncertainty resulting from Washington's unwillingness to work together to solve major problems. With more than three decades of policy experience and knowing how Washington does – and doesn’t – work, Senator Olympia Snowe has keen and contemporary insights on Congress and the key issues in this election year.

What's Gone Wrong in Washington, and Why It Doesn't Have to Be This Way

Having witnessed government’s greatest potential as well as its capacity for dysfunction, no one is more adept at explaining what’s gone wrong and illustrating why it doesn’t have to be this way. As a key participant in every major issue of the past decade and beyond, few can speak with greater firs ...

Having witnessed government’s greatest potential as well as its capacity for dysfunction, no one is more adept at explaining what’s gone wrong and illustrating why it doesn’t have to be this way. As a key participant in every major issue of the past decade and beyond, few can speak with greater firsthand knowledge as to how policy-making has virtually been abandoned as a matter of practice in our government, and has now devolved into a series of gotcha votes for political leverage. But as Senator Snowe makes clear, the forces of polarization can be defeated.

Her powerful message, delivered with 34 years of insider experience in Congress, centers on how we reached this point and, most importantly, concrete ideas on how we can return the Congress to its past ability to reach consensus.

Anything is Possible: From a Tragic Childhood to the Pinnacle of Power – How to Overcome Obstacles and Make a Difference

She speaks of how, having lost both her parents before the age of 10, she realized early in life that there are two choices: either become overwhelmed by tragedies, or view them as temporary and not permanent. It’s a lesson that re-emerged in her mid-20’s when her first husband, who was serving in the Maine Legislature at the time, was killed in a car accident – and she came to the conclusion that she would run to fill his seat. And she relates how her loss also brought home the importance of women’s issues as she asked herself, “What do other women do, especially women with children?”

Drawing on a remarkable 34 years of experience in Washington, Senator Snowe offers audiences a rare glimpse into how she and other women in the House and Senate have been able to combine forces regardless of their party labels, to overcome hurdles and make a difference for women across America. She brings a unique perspective on how women can succeed and contribute even in one of the most exclusive, male-dominated institutions – and how their contributions and collaborations in Congress actually offer a template for making government work again. At the same time, her entire life’s story is an incredible and inspiring testament to the fact that any obstacle in any sphere of life can be overcome – and truly anything is possible.

VIRTUAL PROGRAMMING: For virtual and in-person events, Olympia Snowe is a political voice that speaks to the need for bipartisanship and coming together, both in D.C. and around the dinner table

Only the fourth woman in history to be elected to both houses of Congress and the first woman in American history to serve in both houses of the state legislature and both houses of Congress, OLYMPIA SNOWE sheds light on today’s political climate and argues for the need for bipartisan solutions. At Duke’s Crown Lecture in Ethics, Snowe addressed hundreds of faculty, students, and community members in her keynote, “Politics and Our Potential: Can Congress Rise to Meet its Obligation to Govern.” The group raved: “Dysfunction, partisanship, and gridlock dominate the headlines. Sen. Snowe, a political insider who is now out of office, is uniquely positioned to talk to us about coming together to solve our common problems….” At virtual and in-person events, Snowe is the ideal person to speak to the need and desire for Americans to come together. 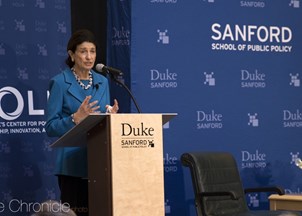 Former Senator and Member of House of Representatives OLYMPIA SNOWE shed light on today’s political climate and the need for bipartisan solutions at Duke’s Crown Lecture in Ethics. Addressing hundreds of faculty, students and community members, Snowe delivered a keynote, “Politics and Our Potential: Can Congress Rise to Meet its Obligation to Govern,” highlighting the need for our leaders to reach across the aisle. The first and only woman to have served in both houses of a state legislature, and then both chambers of Congress, as well as the first woman to serve on the Senate Finance Committee, Snowe was renowned as one of Congress’ leading moderate policymakers thanks to her solidly centrist views and efforts to build bipartisan consensus.  In all her years of service, Snowe never lost an election. Currently, she’s a Senior Fellow at the Bipartisan Policy Center where she co-chairs the Commission on Political Reform, which has put forth a set of bipartisan recommendations on everything from improving voter turnout to Congress’ budget process in order to strengthen our democracy. As the director of Duke’s Center for Political Leadership, Innovation and Service (POLIS) said: “Dysfunction, partisanship and gridlock dominate the headlines. Sen. Snowe, a political insider who is now out of office, is uniquely positioned to talk to us about coming together to solve our common problems….” Leading up to her talk, Snowe participated in an interview with The Duke Chronicle, opening up about her pioneering career in politics. She also engaged in a more intimate discussion with students at POLIS’ Democracy Lab, garnering praise in a tweet: “Grateful to former Senator Olympia Snowe for spending some time in @Mayer_at_Duke's Democracy Lab today—imparting wisdom on bipartisanship learned from a distinguished career in public service.”

Jeff Terry (Executive Director, Advancement, UNC Kenan-Flagler Bsuiness School, UNC) sent the following high praise after OLYMPIA SNOWE's recent event: "Senator Snowe gave a wonderful lecture to our faculty, staff, students, alumni and surrounding UNC community.  Her topic, 'What’s Gone Wrong in Washington, and Why It Doesn’t Have to Be This Way,' certainly resonated with every audience member and highlighted Senator Snowe’s skills and reputation as a consensus builder in Washington.  What is more, Senator Snowe is so gracious and engaging. This was one of the best lectures we have ever had at UNC Kenan-Flagler Business School." Fighting for Common Ground: How We Can Fix the Stalemate in Congress

Olympia Snowe’s dedicated work in the U.S. Senate garnered her nationwide recognition as a leading policymaker in Washington. In 2005, she was named the 54th most powerful woman in the world by Forbes magazine. In 2006, Time magazine named her one of the top ten U.S. Senators. Calling her “The Caretaker,” it wrote of Snowe: “Because of her centrist views and eagerness to get beyond partisan point scoring, Maine Republican Olympia Snowe is in the center of every policy debate in Washington, but while Snowe is a major player on national issues, she is also known as one of the most effective advocates for her constituents.”

With her election in 1994, Olympia J. Snowe became only the second woman Senator in history to represent Maine, following the late Sen. Margaret Chase Smith, who served from 1949-1973. In November 2006, she was re-elected to a third six-year term in the United States Senate with 74 percent of the vote.

Before her election to the Senate, Olympia Snowe represented Maine’s Second Congressional District in the U.S. House of Representatives for sixteen years. Senator Snowe is only the fourth woman in history to be elected to both houses of Congress and the first woman in American history to serve in both houses of state legislature and both houses of Congress. Elected in 1978 at the age of 31, Olympia Snowe is the second youngest Republican woman, and the first Greek-American woman ever, to be elected to Congress. She has won more federal elections in Maine than any other person since World War II.

Focusing her attention on efforts to build bipartisan consensus on key issues that matter to Maine and America, Snowe has built a reputation as one of the Congress’ leading moderates. In 1999, she was cited by Congressional Quarterly for her centrist leadership, and was co-chair with Senator Mary Landrieu (D-Louisiana) of a bipartisan, consensus building group in the Senate called the Common Ground Coalition, a forum for communication and cooperation between Senate Democrats and Republicans.

During her time in the Senate, Senator Snowe worked extensively on a number of issues, such as budget and fiscal responsibility; education, including student financial aid and education technology; national security; women’s issues; health care, including prescription drug coverage for Medicare recipients; welfare reform; oceans and fisheries issues; and campaign finance reform.