Kurt Andersen–a brilliant analyst and synthesizer of historical and cultural trends, bestselling novelist, groundbreaking media entrepreneur, and host of public radio’s Studio 360– takes a smart and refreshingly hopeful approach to our culture and politics. Bestelling author of Fantasyland: How America Went Haywire: A 500 Year History, Andersen provides audiences with a fascinating examination of America’s culture that brilliantly displays how we’ve gotten to where we are today, and where we are going.

Please send me availability & fees for Kurt Andersen
Thank you for your interest in this Harry Walker Agency speaker.
You will hear from one of our agents in the next 24 hours. If you have any other questions or information, please call us right away at 646.227.4900. Are you also interested in learning more about other speakers? Create a My Speaker List.
Rave Reviews About Kurt Andersen
“
We thought Kurt Andersen was the best moderator we could ever have picked! Our guests were thrilled, and the event was a success!

How can we make sense of America’s current "post-factual," "post-truth," “fake news” moment? By looking to America’s past. All the way back. To the wishful dreams and make-believe fears of the country’s first settlers, the madness of the Salem witch trials, the fantasies of Hollywood, the anything-g ...

How can we make sense of America’s current "post-factual," "post-truth," “fake news” moment? By looking to America’s past. All the way back. To the wishful dreams and make-believe fears of the country’s first settlers, the madness of the Salem witch trials, the fantasies of Hollywood, the anything-goes 1960s, the gatekeeper-free internet, the profusion of reality TV....all the way up to and most especially including President Donald Trump. In this fascinating and lively talk, Kurt Andersen brings to life the deep research behind and profound implications of his groundbreaking, critically acclaimed and bestselling latest work. Connecting the dots in a fresh way to define America’s character—from the religious fanatics and New Age charlatans to talk-radio rabble-rousers and online conspiracy theorists—Andersen explains our national susceptibility to fantasy and how our journey has brought us to where we are today.

Historically, America has always shifted between wild, exuberant speculation and steady, sober hard work, as well as back and forth between economic booms and busts, and between right and left politically. This is one of the rare moments when all these cycles shift dramatically and simultaneously&nd ...

Historically, America has always shifted between wild, exuberant speculation and steady, sober hard work, as well as back and forth between economic booms and busts, and between right and left politically. This is one of the rare moments when all these cycles shift dramatically and simultaneously–a moment when complacency ends, ossified structures loosen up, and enormous positive change is possible. Kurt Andersen explores how the present flux can enable us as a society to emerge stronger than before – and at the same time, rediscover some of the old-fashioned American values of which we’ve lost sight. 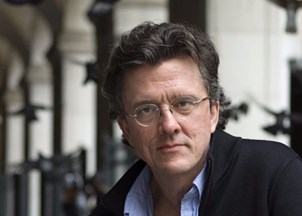 New York Times bestselling author and visionary media entrepreneur KURT ANDERSEN offers brilliant analysis and synthesizing of current events and cultural trends with humor and insight. Host of the Peabody-winning public radio program Studio 360, a smart and surprising guide to what's happening in pop culture and the arts, and bestelling author of Fantasyland: How America Went Haywire: A 500 Year History, Andersen provides audiences with a fascinating  examination of America’s culture that brilliantly displays how we’ve gotten to where we are today, and where we are going. Sought-out to speak everywhere from The Aspen Institute to TED, Andersen's engaging talks provide prescient insights into the political and cultural trends and shifts we can expect in the future. Rave reviews from his recent engagements include: "Kurt was the best we could ever have picked! Our guests were thrilled, and the event was a success" (LVMH); "Kurt was, as always, extremely well prepared and did a miraculous job." (The New Museum) 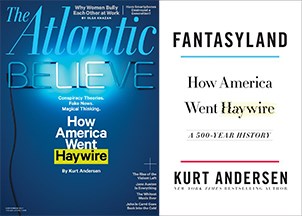 Nabbing the top slot on Amazon’s bestseller list the day of its release, KURT ANDERSEN's book Fantasyland: How America Went Haywire: A 500 Year History is a fascinating examination of America’s culture and past that brilliantly displays how we’ve gotten to where we are today. Andersen traces America’s national character, connecting the dots and revealing the scope of how “believe-whatever-you-want fantasy is deeply embedded in our DNA,” from the epic dreaming of our founders, to the Salem witch trials, to the birth of Hollywood, up until today’s “fake news.” As Walter Isaacson, President of the Aspen Institute, wrote: “This is an important book—the indispensable book—for understanding America in the age of Trump. It’s an eye-opening history filled with brilliant insights…” Having already discussed the incredible revelations and impact of the book at the Aspen Institute, graced the cover of both The Atlantic’s September Issue and the Sunday New York Times Book review, and making headlines in Slate, The Village Voice, WNYC, and more, Fantasyland is consistently hailed as THE essential must-read for understanding America’s current moment. Appearing on The Last Word with Lawrence O’Donnell—during which O’Donnell describes the book as, “brilliant,” “invaluable,” and a “stunning, sweeping, explanation”—Andersen delves into the eye-opening breadth of his work, and remarkable amount of research and insight contained in Fantasyland’s pages. Andersen brings the same astute, and humorous analysis, to his speaking engagements. Sought-out to speak everywhere from TED to The Aspen Institute, he receives rave reviews such as: "Kurt was, as always, extremely well prepared and did a miraculous job." (The New Museum) 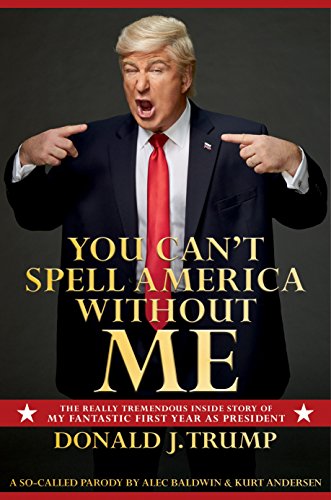 You Can't Spell America Without Me: The Really Tremendous Inside Story of My Fantastic First Year as President Donald J. Trump (A So-Called Parody) Reset: How This Crisis Can Restore Our Values and Renew America 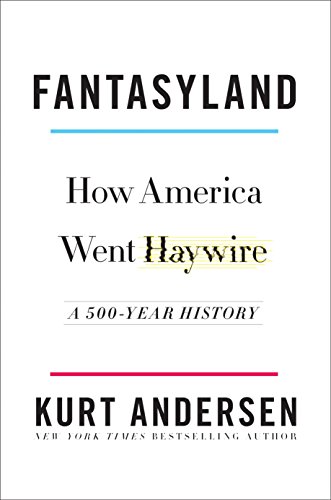 Episode 1040: Kurt Andersen - WTF with Marc Marron (Podcast)
The Pure Products of America Go Crazy: A Conversation with Kurt Andersen About “Fantasyland” - LA Review of Books
Trumpcast Live From IAB’s Leadership Dialogues - Slate
The “fake news” era is 500 years in the making - Salon
Kurt Andersen on Donald Trump and Fantasyland - BBC Newsnight
American crackpots used to be a charming part of our civic life, until they started steering the ship - Los Angeles Times
'Fantasyland' author Kurt Andersen on how Americans believe what they want - Chicago Tribune
How America Lost Its Mind - The Atlantic
Reverse-Engineering a Genius (Has a Vermeer Mystery Been Solved?) - Vanity Affair
Biography

Kurt Andersen is a brilliant analyst and synthesizer of historical and cultural trends, a bestselling novelist, a groundbreaking media entrepreneur, and the host of public radio’s Studio 360.

Andersen is the author of the critically acclaimed, bestselling novels True Believers, Heyday and Turn of the Century. The New York Times called Turn of the Century "wickedly satirical" and "outrageously funny" and named one of its Notable Books of the year, while The Wall Street Journal called it a "smart, funny and excruciatingly deft portrait of our age." It was a national bestseller. Heyday was a New York Times bestseller which the Los Angeles Times called "a major work," and won the Langum Prize as the best American historical fiction of the year. True Believers was named one of the best novels of the year by The Washington Post and The San Francisco Chronicle, called by Fortune "the best reverie on the 1960s and their legacy," and by Vanity Fair "a great American novel.”

His latest book is Fantasyland: How America Went Haywire: A 500-Year History. According to Walter Isaacson (Steve Jobs, Benjamin Franklin), Fantasyland “is an important book -- the indispensable book for understanding America in the age of Trump.” And Stephen Dubner (Freakonomics) says "the thinking and the writing are both dazzling; it’s an absolute joy to read and will leave your brain dancing with excitement long after you’re done.” His other non-fiction books include The Real Thing and Reset: How This Crisis Can Restore Our Values and Renew America.

He is host and co-creator of Studio 360, the cultural magazine show broadcast on more than 200 stations and distributed by podcast to almost 1 million a million listeners each week. The show has won two Peabody Awards for broadcast excellence.

He has also written for film, television and the stage. He was executive producer and head writer of two prime-time specials for NBC, starring Jerry Seinfeld and Julia Louis-Dreyfus, and a creator of three pilots for ABC and NBC. More recently he wrote scripts for HBO and Amazon. He was also co-author of Loose Lips, a satirical off-Broadway revue that had long runs in New York and Los Angeles starring Bebe Neuwirth, Harry Shearer and Andy Richter.

He regularly appears as a commentator on MSNBC, CNN, PBS, and the BBC. In 2011 he served as a guest Op-Ed columnist for The New York Times. From 2004 through 2008 he wrote a column called “The Imperial  City” for New York magazine (one of which is included in The Best American Magazine Writing 2008), and contributes to Vanity Fair. In 1999 he delivered a TED Talk about the new era of hyper-capitalist media and technology as depicted in Turn of the Century. He was previously a columnist for The New Yorker (“The Culture Industry”) and TIME (“Spectator”). He began his career in journalism at TIME, where during the 1980s he was an award-winning writer on politics and criminal justice before becoming, for eight years, the magazine’s architecture and design critic.

As an editor, he co-founded the transformative independent magazine Spy, which increased its circulation tenfold and became profitable after just three years. He also served as editor-in-chief of New York magazine during the mid-90s, presiding over its editorial reinvigoration and record profitability. In 1999 he co-founded Inside, an online and print publication covering the media and entertainment industries, and in 2004 and 2005 he oversaw a relaunch of Colors magazine. In 2006 he co-founded Very Short List, an online cultural newsletter that won a 2009 Webby Award. From 2007 to 2009 he was editor-at- large for Random House, responsible for conceiving, acquiring and overseeing non-fiction books.

He serves on the boards of the Smithsonian’s Cooper-Hewitt National Design Museum and Pratt Institute. He graduated magna cum laude from Harvard College, where he was an editor of the Lampoon. He received an honorary doctorate from the Rhode Island School of Design in 2005, and in 2009 was Visionary in Residence at the Art Center College of Design in Pasadena. He was named by New York magazine as one of the “100 People Who Changed New York,” and by Forbes as one of the “25 Most Influential Liberals in the U.S. Media.” And he was named the 2014 arts Medalist by Harvard College’s Signet Society. He lives in Brooklyn with his wife, Anne Kreamer.