Her Majesty Queen Noor is an international public servant and advocate for cross-cultural understanding and conflict prevention and recovery issues such as refugees, missing persons, poverty, climate change and disarmament. Her peace-building work has focused on the Middle East, the Balkans, Central and Southeast Asia, Latin America and Africa. 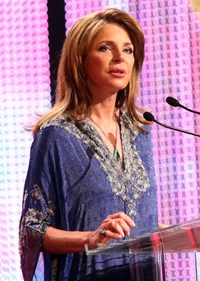 Please send me availability & fees for Her Majesty Queen Noor
Thank you for your interest in this Harry Walker Agency speaker.
You will hear from one of our agents in the next 24 hours. If you have any other questions or information, please call us right away at 646.227.4900. Are you also interested in learning more about other speakers? Create a My Speaker List.
Rave Reviews About Her Majesty Queen Noor
“
Queen Noor knocked it out of the park. She was hands down the best speaker we have ever had and was so clearly prepared for our event. It was the most excited I have seen the Dallas charity scene in so long—she reinvigorated the whole town! She is such a professional and such a competent speaker and leader. It was absolutely a pleasure to have her and we so appreciate all of the different aspects she participated in so graciously. I hope she was pleased with this use of her time—it made a difference. She has a LOT of new fans!

Play
Now
News Interview - Queen Noor Of Jordan: Open Your Heart And Mind To Syrian Refugees | For The Record | MSNBC

Human Security in the 21st Century

Human security depends on leaders and people working together to facilitate lasting change in underprivileged communities by creating economic opportunities, building the capacity for self-reliance, supporting efforts towards nuclear non-proliferation, and improving cross-cultural understanding. Her ...

Human security depends on leaders and people working together to facilitate lasting change in underprivileged communities by creating economic opportunities, building the capacity for self-reliance, supporting efforts towards nuclear non-proliferation, and improving cross-cultural understanding. Her Majesty Queen Noor is an international public servant and an outspoken voice on these issues, and her unique insight on Arab-Western relations offers audiences a practical look at the challenges our leaders and societies face in the 21st Century. 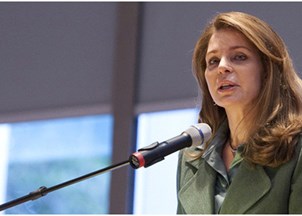 Internationally renowned humanitarian and activist HER MAJESTY QUEEN NOOR has been in-demand at several high-profile events, delivering empowering and informative remarks on global affairs and human rights. Queen Noor delivered the opening keynote for an audience of 1,200 at the Forum for the Future of Agriculture, highlighting how sustainable development and the environment are inextricably linked to the lives and rights of women and children in the developing world. Next, Queen Noor delivered a keynote at the Ocean Risk Summit, shedding light on the implications of environmental changes for communities around the world. An international public servant and advocate for cross-cultural understanding and conflict prevention, Queen Noor is heralded for her global focus and peace-building work around the world. A founder and chair of the King Hussein Foundation, which works to promote peace and sustainable development throughout the Middle East, president of United World Colleges, and founding leader of Global Zero, Queen Noor’s crucial work has given her unique, on-the ground experience, which she shares with audiences worldwide. Heralded as “hands down the best speaker we have ever had… such a professional and such a competent speaker and leader” (Genesis Women’s Shelter), “genuinely original, and interesting…” (Global Water International), “eloquent, graceful, and warm” (World Awards Media), and “an outstanding success” (University of Pennsylvania, Queen Noor is a smash hit at each of her speaking engagements.

Watch some of Her Majesty QUEEN NOOR's talks here  > >

Books by Her Majesty Queen Noor Leap of Faith: Memoirs of an Unexpected Life

Tweets by Her Majesty Queen Noor

Truth and Justice Are Antidotes to Violence and Hatred - Huffington Post
Her Majesty Queen Noor: Jubilee Girls Are Some Of Jordan’s Top Achievers - Jordan Business
Biography

Her Majesty Queen Noor is an international public servant and advocate for cross-cultural understanding and conflict prevention and recovery issues such as refugees, missing persons, poverty, climate change and disarmament. Her peace-building work has focused on the Middle East, the Balkans, Central and Southeast Asia, Latin America and Africa.

Born to an Arab-American family distinguished for its public service, she received a degree in Architecture and Urban Planning from Princeton University prior to working on international urban planning and design projects in Australia, Iran, the United States and the Arab world. She married His Majesty King Hussein bin Talal of Jordan in 1978.

Queen Noor’s work in Jordan and the Arab world has focused on national and regional human security in the areas of education, conservation, sustainable development, human rights and cross-cultural understanding. Since 1979, the initiatives of the Noor Al Hussein and the King Hussein Foundations, which she founded and chairs, have advanced development thinking in Jordan and the Middle East through pioneering best practice programs in the fields of poverty eradication, women’s empowerment, microfinance, health, and arts as a medium for social development and cross-cultural exchange. The Foundations provide training and capacity-building expertise in these areas in the broader Arab and Asian regions. www.nooralhusseinfoundation.org ; www.kinghusseinfoundation.org

She is also chair of King Hussein Foundation International, a US non-profit 501(c)(3) which, since 2001, has awarded the King Hussein Leadership Prize to individuals, groups, or institutions that demonstrate inspiring leadership in their efforts to promote sustainable development, human rights, tolerance, social equity and peace.

Queen Noor has made environmental priorities an essential component of her work to promote human security and conflict resolution. Shortly after her marriage, she became patron of Jordan’s Royal Society for the Conservation of Nature, the Middle East’s first environmental NGO. RSCN programs have become regional models for conservation and sustainable development providing training and capacity building in the Middle East. Internationally, she has focused on environmental conservation and human security with emphasis on water and Ocean health and protection issues.  She is Patron of the International Union for Conservation of Nature, Founding and Emeritus President of BirdLife International, Trustee Emeritus of Conservation International, a member of the Ocean Elders and has received a variety of awards and honors for her activism.

A long-time advocate for a just Arab-Israeli peace and for Palestinian refugees, Queen Noor is a Director of Refugees International and an outspoken voice for the protection of civilians in conflict and displaced persons around the world.

She is a Commissioner of the International Commission on Missing Persons (ICMP), created  in 1996 to promote reconciliation and conflict resolution after the Balkans war and now is the leading provider of DNA-assisted identifications, and related healing and reconciliation best practices to countries worldwide dealing with natural catastrophes, human rights abuses and conflict.

Queen Noor is a founding leader of Global Zero, an international movement working for the worldwide elimination of nuclear weapons and has been an advisor to, and global advocate for, the International Campaign to Ban Landmines.

Queen Noor is also involved with a number of other international organizations advancing global peace-building and conflict recovery. She is President of the United World Colleges (UWC), a network of 17 equal-opportunity international IB colleges around the world which foster cross-cultural understanding and global peacebuilding; a Trustee of the Aspen Institute, Advisor to Search for Common Ground and Trust Women – the Thomson Reuters Foundation annual conference aiming to put the rule of law behind women’s rights.

In recognition of her efforts to advance development, democracy and peace, the Queen has been awarded numerous awards and honorary doctorates in international relations, law and humane letters.

She has published two books, Hussein of Jordan (KHF Publishing, 2000) and Leap of Faith: Memoirs of an Unexpected Life (Miramax Books, 2003), a New York Times #1 best seller published in 17 languages.