Time magazine named Dick Costolo one of the 10 Most Influential U.S. Tech CEOs. In his speeches, Dick Costolo calls on his experience as a digital entrepreneur, business executive, and surprisingly, his experience as an improvisational comedian to deliver entertaining, insightful speeches with a powerful message about the future of social media and the Internet. He is a digital entrepreneur who has launched a series of highly successful ventures, but when he became CEO of Twitter in 2010, he realized he was helping run more than digital platform. Twitter had become a tool to collapse regimes, a tool that gave a powerful voice for the unempowered, and created a new way for businesses to connect and news to be reported. More than ever before, social media was forcing ambitious and significant changes to politics, business, ethics, governance, democracy and inclusion. Twitter was enabling all of that while trying to grow revenue, manage rocket-speed growth, and court investors. 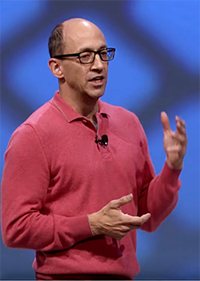 Please send me availability & fees for Dick Costolo
Thank you for your interest in this Harry Walker Agency speaker.
You will hear from one of our agents in the next 24 hours. If you have any other questions or information, please call us right away at 646.227.4900. Are you also interested in learning more about other speakers? Create a My Speaker List.
Keynote clip - Delegate | PMO Symposium [5:07] - Get Sharable Link
https://www.harrywalker.com:443/speakers/dick-costolo/?videoid=35911
Keynote clip - Delegate | PMO Symposium [5:07]

Play
Now
Virtual in Conversation - Leadership in times of crisis [25:07]

Play
Now
Keynote clip - Your Team Decides if You're a Leader | PMO Symposium [3:44]

The Crumbling Barriers to Power

One effect of technology permeating every aspect of our lives is the crumbling barriers between us. Social media and the Internet have taken a sledgehammer to The Great Wall between us and those in power, as well as between us and those who previously had no voice. Now status, race and socioeconomics have less relevance, and equal access to information is officially declared a human right by the U.N, much to the chagrin of dictators who know the most effective way to keep power is to restrict access to information. Social media and the Internet are in fact the world's most powerful democratic tools, and this has real geopolitical and governance implications. Costolo explores the ambitious and significant implications of Twitter and other technology platforms based on a democratic ideal of equal access for all.

Ethics, Empathy and the Future of Technology

The future of technology is about open and equal access to information and expression. Social media brings down regimes, allows one person's voice to reach the world, and gives news stories multiple points-of-view. As with any democratic platform, we must ask how we will govern ourselves and cultiva ...

The future of technology is about open and equal access to information and expression. Social media brings down regimes, allows one person's voice to reach the world, and gives news stories multiple points-of-view. As with any democratic platform, we must ask how we will govern ourselves and cultivate civility and responsibility within our freedom. What will each of us choose to say and to permit with our new global voice? Costolo explores the intersection of ethics and content and urges each of us to use our access responsibly and with empathy. He encourages us to shine a light on what's good in the world and what needs to be changed, to champion the underserved, to embrace people's differences and amplify the best of humanity.

When Twitter began, the founders did not set out to create a new economy, yet the way we do business has changed forever. When consumers are 80% more likely to purchase from a business they follow, there is a real business case for open communication between a brand and its consumers. Open access to ...

When Twitter began, the founders did not set out to create a new economy, yet the way we do business has changed forever. When consumers are 80% more likely to purchase from a business they follow, there is a real business case for open communication between a brand and its consumers. Open access to information, or creating the feeling of open access to the brand, builds loyalty, identifies new product ideas and provides another channel for consumer influence. Equal access to information renders entire business models fragile as consumers become their own sourcers with all of the information. Costolo lays out the implications of an open access economy on the way we buy and sell.

Former Twitter CEO DICK COSTOLO and former Twitter COO Adam Bain launched a San Francisco-based startup advisory and investment firm called 01 Advisors, targeted to be a $200M fund. They have invested in tech firms such as Tipalti, which developed a popular solution to automate accounting for businesses, Electric, a platform that aims to put IT departments in the cloud, and VSPlay, which provides leagues, scheduling, and infrastructure for the fastest-growing high school sport in America- eSports. 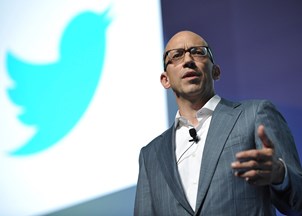 Virtual Programming: Dick Costolo on tech and thriving in an uncertain future

Former COO and CEO of Twitter DICK COSTOLO is a management expert who has taken numerous tech startups from inception to success during periods of intense disruption and change. And now he is being sought-out for a virtual event with Tipalti, the leader in global payables automation. In the era of COVID-19 and a perpetual work-from-home environment, Dick will share guidance on navigating economic uncertainty while running a high performing, efficient operation. The session will feature attendee-submitted questions on leading startups and mid-sized organizations through today’s uncertainties while still positioning the business for the future, and what investors and venture capitalists looking for.

Described by Business Insider as "one of Silicon Valley's most impressive CEOs," and named by TIME as one of the 10 Most Influential U.S. Tech CEOs, i in his five years as CEO at Twitter, Costolo led the social media platform through an explosive, uncertain future, taking it from a private company with 300 staff valued at $3.7bn to a public company with 3,600 employees valued at $23.5bn. Recently, he's been interviewed on CNBC on tech's response to the coronavirus, and making headlines for his charitable contributions amid the pandemic. Costolo’s speeches and interviews are chock-full of actionable insights on what it’s like to be at the helm of “the fastest growing, most disruptive communications platform in the world” and what it takes to survive in tomorrow’s future. Costolo credits his background in improv comedy for his talent for bold thinking and thriving in “unscripted” situations. He became known, and made headlines, for personally leading a management course at Twitter in order to create a cohesive environment and effective strategy for his fast-growing and ever-evolving workforce, highlighting what it takes to build trust, transparency, and resilience even as a company’s role in society changes. Having recently launched 01 Advisors, a venture and advisory helping entrepreneurs build great companies-- Costolo is at the 50-yard line of the future of work and developing the next wave of disruptors. 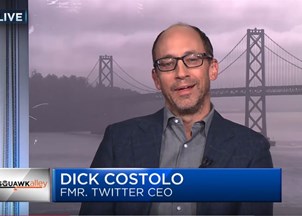 Dick Costolo in the News

Here is a sampling of DICK COSTOLO's media appearances:

2.2.2021 Dick Costolo on takeaways from the Reddit-fueled market volatility | CNBC

6.24.2020 Costolo Says Twitter Is Doing Best It Can With Trump Tweets

Mr. Costolo holds a B.S. in Computer and Communication Science from The University of Michigan, Ann Arbor as well as an honorary Doctor of Laws degree. He spent a number of years after graduating from Michigan and before starting his first company performing around the world with improv comedy groups like Chicago's Annoyance Theater. The former improv comedian has been a consultant on HBO’s “Silicon Valley”, he sits on the boards of Patreon and IfOnly, and he is a Venture Partner at the firm 01 Advisors.

He resides in Marin county with his family, two dogs and a shocking number of bees.