Delano Lewis, a native Kansan, is a family man, a pioneer, a trailblazer, a public servant, a businessman, and a diplomat. His message is clear that with a strong family foundation, solid education and training, hard work, perseverance, committed mentors and supporters, you, too, can be successful. It starts with self.

Please send me availability & fees for Delano Lewis
Thank you for your interest in this Harry Walker Agency speaker.
You will hear from one of our agents in the next 24 hours. If you have any other questions or information, please call us right away at 646.227.4900. Are you also interested in learning more about other speakers? Create a My Speaker List.
Rave Reviews About Delano Lewis
“
The Boston College School of Social Work was truly honored to be able to sponsor a talk by former Ambassador Delano Lewis as part of the 2012 BC Distinguished Speakers series. His very informative talk at BC, "Caring for People is a Global Responsibility" was so inspirational that all in attendance left believing, "I can do this- I can give back-I can do for others here and everywhere."

Ambassador Lewis is uniquely qualified to speak on issues of race and race relations in America.  He is an African American & the product of segregated schools in Kansas City, Kansas, graduating from an all black high school, Sumner High School, in 1956.  From his days at Kansas Boys State, thro ...

Ambassador Lewis is uniquely qualified to speak on issues of race and race relations in America.  He is an African American & the product of segregated schools in Kansas City, Kansas, graduating from an all black high school, Sumner High School, in 1956.  From his days at Kansas Boys State, through his years at Kansas University & Washburn Law School, Lewis dealt with the challenges of being black in a Society that discriminates based on race and color.   He succeeded and triumphed despite those obstacles, rising to the highest levels of business, government and the non-profit sectors. Ambassador Lewis has thoughts and ideas on advancing race relations in America. He is an effective communicator and a respected leader.

Life Lessons based on my book

- Move outside your comfort zone

- Where do you go from here?

- Leadership - Understanding cultures - Career advancement - Success in the corporate world - How to get on corporate boards ...

- Success in the corporate world

- How to get on corporate boards 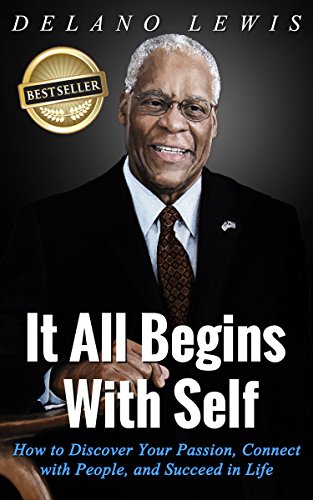 Delano Lewis - It All Begins with Self

Delano E. Lewis, former U.S. ambassador to the Republic of South Africa and former president and chief executive officer of National Public Radio, has led a long and successful career in global, corporate and public affairs.

Lewis joined NPR as President and CEO in January, 1994, with his vision to make NPR "the leading provider of high quality news, information and cultural programming worldwide." During his tenure, he focused on three areas: top-quality programming, financial strength and customer service.

Before coming to NPR, Lewis was president of C&P Telephone Company, a subsidiary of Bell Atlantic, where he had served in various positions since 1973. Earlier in his career, he worked with former Congressional Delegate Walter Fauntroy of the District of Columbia and Senator Edward Brooke of Massachusetts. He also served as Country Director in Uganda for the U.S. Peace Corps, and was an attorney with the U.S. Department of Justice.

Lewis served on the Boards of Directors of Colgate-Palmolive, Black Entertainment Television, Halliburton and Guest Services, Inc. He served as chairman of the board of the Eugene and Agnes Meyer Foundation. He is an honorary member of Mainstream, a national board member of Africare, and an emeritus member of the board of the Washington Performing Arts Society.