An entrepreneur in every sense of the word, Daymond John is CEO and Founder of FUBU, a much-celebrated global lifestyle brand, and a pioneer in the fashion industry with over $6 billion in product sales. He is an award-winning entrepreneur, bestselling author of five books including his most recent, Powershift: Transform Any Situation, Close Any Deal, and Achieve Any Outcome, and star of ABC's Shark Tank, where millions of weekly viewers tune into the show as John demonstrates his marketing prowess and entrepreneurial insights. His marketing strategies and ability to build successful brands has made him a highly influential consultant and motivational speaker today.

Each of Daymond John’s keynotes are customized to fit your specific objectives. They are informative yet entertaining and involve: lots of humor, high-energy, and audience-speaker interaction. Daymond uses compelling stories from his rags-to-riches journey to illustrate his points and always leaves audience members with practical, tangible, and invaluable tools to incorporate into their professional as well as personal endeavors. With over twenty years of phenomenally successful business experience, Daymond has the ability speak on a wide-range of business-related matters.

Please send me availability & fees for Daymond John
Thank you for your interest in this Harry Walker Agency speaker.
You will hear from one of our agents in the next 24 hours. If you have any other questions or information, please call us right away at 646.227.4900. Are you also interested in learning more about other speakers? Create a My Speaker List.
Rave Reviews About Daymond John
“
Bottom-line, Daymond performed superbly; all feedback was very positive and he did a fantastic job! And I was so moved by his after-show greeting of all the attendees…He was so attentive to each person and so personable as well… I cannot begin to tell you how grateful I am to him for making that general session so successful for me, for my organization.

Play
Now
If Nobody Else Likes It, It Might Be a Hit | Inc. Magazine [interview 4:07]

From FUBU to Shark Tank and countless ventures in between, Daymond John’s entrepreneurial journey has spanned more than 25 years. Having gleaned insights from both the successes and failures of his varied career, Daymond has developed  this comprehensive lecture which empowers audiences to learn fro ...

From FUBU to Shark Tank and countless ventures in between, Daymond John’s entrepreneurial journey has spanned more than 25 years. Having gleaned insights from both the successes and failures of his varied career, Daymond has developed  this comprehensive lecture which empowers audiences to learn from his experiences and to make changes in all aspects of their lives; not just in business. He believes the keys to success require establishing the right mindset and following a very specific set of principles, which he has distilled into five key S.H.A.R.K. points.  Whether you’re an entrepreneur,  intrapreneur,  non-profit  employee, bank teller or otherwise, this talk has inspired thousands of people  around the country to reconsider their methods and make positive changes in their lives.

In this keynote, presented in his charismatic style, The Shark, Daymond John, takes audience members on an inspiring, emotional rollercoaster ride. They’ll hear, first-hand, how a man, with no formal business training whatsoever, went from driving cabs and waiting tables at Red Lobster to crea ...

In this keynote, presented in his charismatic style, The Shark, Daymond John, takes audience members on an inspiring, emotional rollercoaster ride. They’ll hear, first-hand, how a man, with no formal business training whatsoever, went from driving cabs and waiting tables at Red Lobster to creating a global fashion empire with retail sales exceeding four billion dollars to date, and a starring role on ABC’s hit reality business show, Shark Tank. Daymond entertains and awes audience members with true-life tales of his incredible successes and numerous failures. Equally important, however, he motivates, inspires, and teaches them how to set and go after their own goals with newfound focus and determination.

Unlike some motivational speakers, rather than spitting-out tiresome “I can make it, so can you” clichés, Daymond shares the exact goal-setting strategies that he attributes to his success and teaches audience members how to incorporate them into their endeavors. This keynote will challenge attendees to exercise their brains in a way that cultivates a positive, goal-setting mindset.

When William Shakespeare said, All the world's a stage, he was indirectly talking about branding! This informative keynote is like nothing else on the market. Sure, there are other speakers that may explain how to market and brand a product, but how many explain, step-by-step, how to brand yourself ...

When William Shakespeare said, "All the world's a stage", he was indirectly talking about branding! This informative keynote is like nothing else on the market. Sure, there are other speakers that may explain how to market and brand a product, but how many explain, step-by-step, how to brand yourself and transfer that power into your job, company or product? Did you realize that you’re a brand? According to The Shark, you were branded the day you were born and continuously every second since!

In this keynote, The Shark, Daymond John, gives audience members in-depth insight into how your personal brand affects all aspects of your life. Not only will attendees learn the importance of branding, Daymond will reveal some of the tricks that helped him expand his brand into dozens of countries around the globe. The techniques shared can be applied to personal branding as well as to the branding of products and concepts.

Corporations love employees with a strong sense of branding because it inspires out-of-the-box thinking, creating an infectious energy that flows throughout the work environment. It's no secret that the world has gotten smaller. Facebook, MySpace, Twitter, Foursquare, and dozens of other social websites have increased the desire for people to be noticed as a brand, let The Shark, Daymond John, show you how.

Women, you have more power than you may think! Although The Shark, Daymond John, is one of the most recognized negotiators on network television, and has conducted hundreds of negotiations with both men and women throughout his twenty years in business, he never planned on speaking on negotiation s ...

Women, you have more power than you may think!

Although The Shark, Daymond John, is one of the most recognized negotiators on network television, and has conducted hundreds of negotiations with both men and women throughout his twenty years in business, he never planned on speaking on negotiation strategies for women; that is, until California First Lady, Maria Shriver, called upon him to speak on this very topic for her annual Women’s Conference.

Feeling a bit out of his realm and comfort zone, The Shark, Daymond John, decided to immerse himself in research to find out what, if any, differences existed between how men and women tend to negotiate with each other. In this keynote, Daymond shares what he discovered in his research and personal experiences over the years. His findings will have audience members sitting up and taking notes! According to The Shark, not only do women have several distinct advantages over men when negotiating – in both professional and personal settings, but quite a few disadvantages as well.

Daymond will share specific techniques on how to respond to today's negotiation challenges. Not only will this keynote leave every attendee feeling empowered, more confident, and ready to tackle the world, they will have lots of fun and laughs in the process. 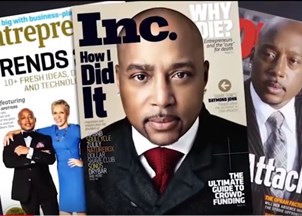 Daymond John in the news

Here is a sampling of DAYMOND JOHN's media appearances: 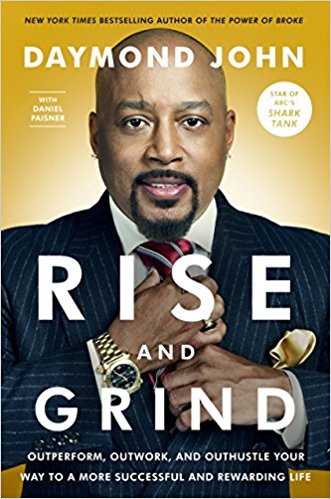 Due out January 23, 2018! Rise and Grind: Outperform, Outwork, and Outhustle Your Way to a More Successful and Rewarding Life The Brand Within: The Power of Branding, From Birth to the Boardroom Display of Power: How FUBU Changed A World Of Fashion, Branding, and Lifestyle

From his wildly successful role on ABC’s smash hit, Shark Tank, to his distinguished status as a Presidential Ambassador for Global Entrepreneurship, Daymond John has become globally recognized for his relentless commitment to promoting and supporting entrepreneurs.

Daymond initially made his mark as the entrepreneur and branding expert behind the groundbreaking lifestyle brand, FUBU, which eclipsed more than $6 billion in global retail sales. From the streets of Hollis, Queens, Daymond started a global movement from the basement of his mother’s house by capitalizing on the then fledgling  hip-hop culture. Today, the streetwear market that FUBU pioneered is a $20 billion dollar industry.

Since then, Daymond has continued to challenge himself and the business world in which he operates. In 2009, Daymond was tapped by lauded television producer, Mark Burnett, to join the cast of a new business-reality concept, Shark Tank. After 8 seasons, 4 Emmy Awards, multiple Critic’s Choice Awards and millions of dollars in investments, the show became the most watched program on Friday nights, and one of the most successful business reality series of all time. Over the course of the series, Daymond has been a mainstay of the cast of Sharks and is now affectionately referred to as, “The People’s Shark” Season 9 was shot in June of 2017 and is currently airing on Sunday nights.

Further expanding his brand as The People’s Shark, Daymond has released three books, the most recent of which debuted at #2 on the New York Times Best-Seller list in January of 2016. While his previous books, Display of Power and The Brand Within were national best-sellers, The Power of Broke stands as the only New York Times best-selling book  from any of the Sharks. Daymond’s highly anticipated new book, Rise And Grind: Outperform,  Outwork, and Outhustle Your Way to a More Successful and Rewarding Life (The Crown Publishing Group) will hit shelves on January 23, 2018.

Beyond the brands, the television series and the books, Daymond’s commitment  to entrepreneurship has been celebrated on a global level. In 2015, he was named a Presidential Ambassador for Global Entrepreneurship and was part  of an exclusive group who joined President Obama at the Global Entrepreneur Summit in Kenya. In March 2016, Daymond accompanied The President on his historic trip to Cuba, which represented the first time a sitting US president visited the island since Calvin Coolidge did in 1928.

One thing Daymond is particularly proud of is overcoming the challenge of living with dyslexia. He has worked with the Yale Center for Dyslexia and he currently sits on the advisory board of Understood.org. Daymond has embraced his affliction allowing it to be a catalyst for his career as a highly sought after public speaker and author.

As a dynamic speaker with more than twenty-five years of proven business experience, Daymond has become one of the most highly sought after speakers in the country. He regularly speaks at Fortune 100 companies, conferences, universities, and independent  businesses alike.  Whether he’s speaking about entrepreneurship, marketing & branding, financial literacy or goal-setting strategies, Daymond’s high energy presentations give audiences relatable advice and practical takeaways. Daymond has delivered keynote speeches for organizations such as General Mills, Johnson & Johnson, Samsung, AT&T, and dozens more.

A recipient of more than thirty-five awards, including the Brandweek Marketer of the Year and Ernst & Young’s Master Entrepreneur of the Year, Daymond serves as CEO of the brand consultancy, The Shark Group, which specializes in brand strategy and product  development,  artist relations and talent development.   Under  Daymond’s  leadership,  The  Shark Group  has  re-written  the  script  on  how companies, brands and products can seamlessly work together to yield a sum greater than its parts. The Shark Group works with a wide range of businesses and brands, including HSN, Forbes, Inc., Shopify and Infusionsoft and superstars such as Catherine Zeta-Jones, the Kardashians, Pitbull, Stan Lee, Carlos Santana, Jillian Michaels and others.