A powerful and versatile speaker, Zozibini Tunzi first gained national attention after delivering a memorable winning answer to host Steve Harvey during the 2019 Miss Universe competition.  Zozi, as she is known, responded, and rallied young women to “take up space”. These words became her battle cry not only to the pageant judges who awarded her the coveted title, but to young girls and women around the world watching the television show. She emphasized that the time was now for them to take their place in society and cement themselves in the history books.

Before becoming Miss Universe, Zozi worked for a global advertising agency and has a huge passion for music and the arts. She begins in pageantry after noting the women before her using the opportunity to become leaders in their communities and use the impact for the greater good. She watched former titleholders utilize their huge following to influence, spark change or continue conversations as young community leaders.  Zozi looked forward to winning the crown and the opportunity to use her title as a microphone and to be a catalyst for positive change. She managed to achieve some of her wishes, and she spoke frequently about women empowerment, diversity and inclusion in the beauty industry, media, and other industries during her reign as Miss Universe.

As Miss Universe, Zozi has been spending a big part of her year speaking out against gender-based violence and pushing forward gender equality, not only on social media, but on multiple panels across the world. She spent her year advocating for organizations including UN Women #HeForSheCampagin, Latino Commission on Aids and Smile Train International to name a few. 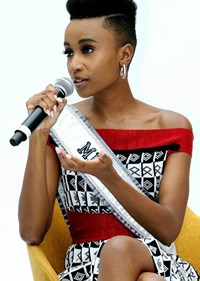 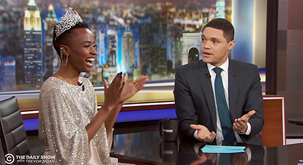 A conversation showing guidance and addressing a global pandemic that affects 1 in 3 women and young girls every minute, of every day, throughout the years ...

A conversation showing guidance and addressing a global pandemic that affects 1 in 3 women and young girls every minute, of every day, throughout the years

Taking Up Space: Cementing Yourself at the Table

Finding the strength to believe in yourself, your voice, your image and how valid each one of us are ...

Finding the strength to believe in yourself, your voice, your image and how valid each one of us are

Taking your seat at anyone’s table and owing it   ...

Taking your seat at anyone’s table and owing it

Born in the South African village of Sidwadweni in Tsolo. Zozibini Tunzi was brought up in a small rural town near her birthplace and is one of four daughters to her parents. After completing school, Zozi, as she is known by, graduated from the Cape Peninsula University of Technology with an ND: Public Relations management in 2018, and began working for a Global advertising agency in Cape Town, South Africa.

As the third woman from South Africa to win the Miss Universe title, Zozi made history by being the first black South African winner to do so in her natural short hair when crowned in December 2019.  Zozi is a proponent of natural beauty and “embracing your authentic self”, and her decision to wear her hair naturally became an example to young women around the globe, “to take up space” and not be afraid to be themselves.  This message was delivered during the national competition and spurred global recognition from the likes of Oprah to Michelle Obama.

Zozi is a voice for gender equality and has engaged in the fight against gender-based violence for several years.  As Miss Universe, Zozi continued her advocacy on a global platform, in the struggle against gender-based violence, gender inequality and the continued grapple for women’s rights.  As an ardent supporter of UN Women’s “#HeForShe”, a social media campaign to changing the narrative around gender stereotypes, Zozi works with this campaign in hopes to bring men into the activist space and help bring about equality; and broaden the movement in bringing more voices together onto this platform to make a change across the world.

During the 2020 year, Zozi helped to create the social media talk platform, #UniverseUnited, and partnered with UN Women SA, the African Union, and various other global based organizations to amplify her message.