Her proprietary systems and strategies have been embraced by C-suite executives at Starbucks, Microsoft, PayPal, as well as Hollywood celebrities, bestselling authors, and top teams in over 700 organizations.

With breathtaking stage skills, gripping stories, and comedic highlights, Victoria takes audiences through a profound experience they'll never forget. Along the way, she shows people how to distinguish their brand, gain competitive advantage, and achieve sustainable growth through a surprising blend of art and business.

Her creative projects have been recognized by The New York Times, The Hollywood Reporter, Variety, BBC, and ABC Good Morning America.

A graduate of Stanford University, Victoria is also a director and critically acclaimed film producer, the creator of two online learning programs, and an inductee into the Speaker Hall of Fame.

Please send me availability & fees for Victoria Labalme
Thank you for your interest in this Harry Walker Agency speaker.
You will hear from one of our agents in the next 24 hours. If you have any other questions or information, please call us right away at 646.227.4900. Are you also interested in learning more about other speakers? Create a My Speaker List.
Rave Reviews About Victoria Labalme
“
Victoria delivered. Pure and simple. She is funny, poignant, dramatic, visual - in short, the total package. I highly recommend Victoria for a program of any size, for any industry, global or domestic.

Play
Now
Keynote clip - Trust the Idea That Can Lead to the Idea [1:33]

Looking for something different? Based on Victoria’s Wall Street Journal bestselling book, Risk Forward, this keynote is like no other. We are living in an era when conditions are in constant flux, people are experiencing internal angst, and uncertainty prevails. Change is increasing at unprecedente ...

Looking for something different?

Based on Victoria’s Wall Street Journal bestselling book, Risk Forward, this keynote is like no other.

We are living in an era when conditions are in constant flux, people are experiencing internal angst, and uncertainty prevails. Change is increasing at unprecedented levels. Victoria’s counterintuitive approach to all this is riveting, surprising, and effective.

The key to success is not in how quickly we can lock in fixed plans, but rather the opposite: how we can embrace the unknown, approach our business as an art, find the courage and confidence to express our unique talents, and achieve remarkable results.

Using skills she developed through 25 years of professional stage and screen performances, Victoria leverages her arts background—from Broadway to Hollywood—to inspire and electrify the audience and help people truly perform at their best. With unexpected insights, she shares her unique Risk Forward methodology—a series of principles that have led to stunning results in organizations around the world.

In this mesmerizing and practical Keynote Performance, Victoria takes the audience on a profound journey. Attendees are laughing, learning and taking notes. They leave empowered and inspired, having internalized proven strategies to engage in their work, take ownership, and express the innate talents that currently lie dormant within.

Pouring her heart into each project, she listens to your needs, studies your organization, selects specific material that will resonate with your audience, crafts unique bits, learns your acronyms, weaves in your event and organizational themes, and puts together a completely customized unforgettable experience.

Competition, speed, and change are increasing at unprecedented levels. Driving peak performance is critical, but breakthrough, sustainable results are elusive.  Using the skills she developed through 25 years of professional stage and screen performances, Victoria leverages her background -- from Br ...

Competition, speed, and change are increasing at unprecedented levels. Driving peak performance is critical, but breakthrough, sustainable results are elusive.

Using the skills she developed through 25 years of professional stage and screen performances, Victoria leverages her background -- from Broadway to Hollywood -- to share unexpected insights and a unique methodology. She shows her clients how to tap into and apply the hidden genius within their individuals and organizations. From the boardrooms of Fortune 100 companies to teams in businesses around the world, Victoria has delivered stunning results.

In this mesmerizing and practical Keynote Performance, Victoria takes audiences through a profound experience they'll never forget. Attendees are learning, laughing, fully engaged and leave feeling not only motivated and recharged, but also having internalized proven strategies to harness the innate talents that currently lie dormant inside them.

With gripping stories, comedic moments and invaluable performing arts principles to skyrocket business performance, Victoria custom-crafts each keynote experience to get people primed, inspired and prepared to tackle their most pressing challenges.

· The #1 strategy top directors use to drive performance
· The key to rapid growth that leading artists use & that businesses must embrace
· How to "stop time" for customers, clients and colleagues
· Broadway secrets to create an impact in every interaction
· Creative strategies to unlock your team’s talents so they’re excited to put ideas into action 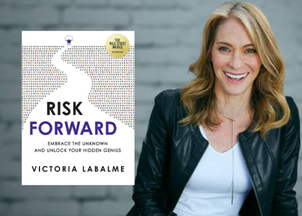 Hall of Fame Speaker and Performance Strategist for top leaders and brands, Victoria Labalme helps people dramatically elevate their ability to communicate, connect and come alive. She shows individuals at all levels how to uncover their hidden genius and express themselves in memorable ways, aligning with a larger mission and winning over the people they serve.

Victoria's Keynote based on her Wall Street Journal Bestselling book, RISK FORWARD, audiences will learn how to:

With gripping storytelling, comedic highlights, and fully customized content, Victoria brings decades of stage mastery to your event. She is available to deliver keynotes and presentations onsite or virtually through her studio space, which is fully equipped to help hosts rock their virtual rooms. If you're looking for someone who is engaging, high energy, and relevant, and can speak to leadership, sales or teams, consider scheduling Victoria for your next event. 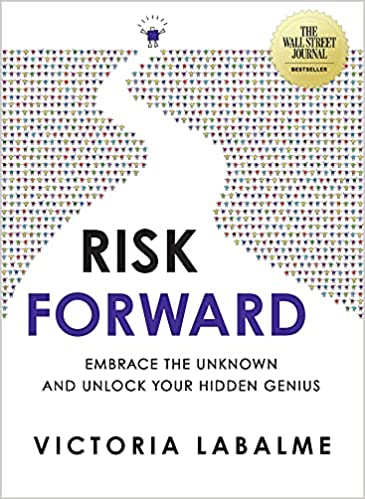 Risk Forward: Embrace the Unknown and Unlock Your Hidden Genius

In 1993, I returned home to NYC from a trip in Ghana, West Africa and was feeling somewhat lost in the world.

I was in my 20s and looked around to find my friends moving along in their lives. They were starting to get married. They had jobs with titles. They were making money, buying homes and having babies.

I had none of these.

What I did have were many seemingly disparate interests in the performing arts and over the next years, I pursued these, creating my own career.

I landed a few dozen big television commercials including a Super Bowl spot; performed at comedy clubs around the city, including Caroline’s on Broadway; got cast in a cameo role on HBO’s Sex & The City; was picked up by David Steinberg who managed Robin Williams and Billy Crystal; and performed my own one-woman show at dozens of theaters.

It was exciting. I had traction. But I sensed there was something more.

Then, on 9/11/2001, in my apartment in lower Manhattan, I woke to the sight of smoke trailing from the World Trade Center outside my bedroom window. A few minutes later, a fireball exploded forward and then… the horrifying, slow motion mushroom-cloud implosion of both towers and life as we knew it.

Two days later, on 9/13/2001, my mother was diagnosed with pancreatic cancer. The doctor pronounced in a sterile voice that she had three months to live. His hollow tone held little compassion. Everyone in NYC was already reeling from the terror 48 hours before. We were all still in shock.

Life spiraled into a surreal dream. With ground zero smoking outside my bedroom window and my solid family structure crumbling with the imminent loss of my mother, my priorities changed immediately…and irrevocably.

Being famous was no longer as important as contributing and connecting. My Throughline shifted from being about me to being about others. And the one question I kept asking… “How can I help?”

A few weeks later, the person coordinating the National Speakers Association conference contacted me, asking if I could perform on their main platform and deliver a breakout session to help professional speakers craft and deliver outstanding performances…and get their messages out into the world. I said, “Yes.” And my life has never been the same again.

Over time, this decision has led me to speak on some of the world’s largest stages and to coach extraordinary leaders: brilliant entrepreneurs, executives at some of the world’s most recognized brands from Microsoft to Starbucks, experts creating PBS specials, New York Times best selling authors, celebrities, Hollywood film directors, professors, brain scientists, advisors and more.

And so my Throughline is to help you express your genius and guide you with some critical tools you’ll need to get your message out into the world.

The world needs you…not who you think you should be.

The insights you’re keeping hidden are the ones we want to hear.