Suzan Johnson Cook was the first female and African-American to hold the position of US ambassador for international religious freedom. She has also served as a principal advisor to the president and the secretary of state.

Additionally, she has been the faith advisor to two US Presidents, three cabinet secretaries,  as well as political and celebrity leaders. She has been featured on Good Morning America, Today, The Today Show, as well as on Good Day NY, NY1 and CNN. Please send me availability & fees for Suzan Johnson Cook
Thank you for your interest in this Harry Walker Agency speaker.
You will hear from one of our agents in the next 24 hours. If you have any other questions or information, please call us right away at 646.227.4900. Are you also interested in learning more about other speakers? Create a My Speaker List.
Explore Talks By Suzan Johnson Cook
Expand all >

Suzan Johnson Cook speaks on a variety of topics, including: Leading Ladies/ Women’s Empowerment: The Need for Life Balance and Leisure for Busy Women You May not need to Retire, You just May Need to Retreat How to Know when to STAND UP, and when it’s time to SIT DOWN It’s YOUR TIME AND YOUR TURN: ...

Suzan Johnson Cook speaks on a variety of topics, including: 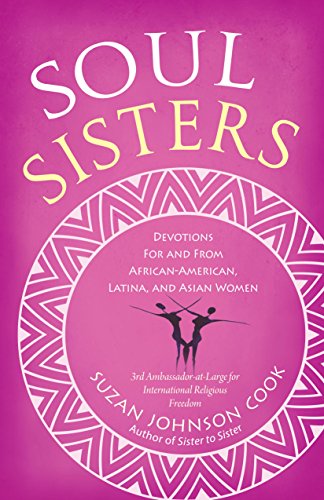 Soul Sisters: Devotions for and from African American, Latina, and Asian Women Live Like You're Blessed: Simple Steps for Making Balance, Love, Energy, Spirit, Success, Encouragement, and Devotion Part of Your Life Becoming a Woman of Destiny: Turning Life's Trials into Triumphs

Suzan Johnson Cook is the President & CEO of CHARISMA SPEAKERS, a full service communications, cross cultural competency, consultancy and coaching firm, and Wisdom Women Worldwide, an empowerment center for women. She is also the executive President and CEO of the ProVoice Movement for Women, and hosts Conversations with Ambassador Sujay on the AmbassadorSujay channel of Youtube. She is a member of the distinguished Renaissance Weekend, last DELTA SIGMA THETA Sorority. Her Interviews are impactful, interesting, inspirational, informative, intimate and insightful. She is also a TV commentator for The Huffington post.

Branded and known as the “Leader’s Leader," she has been the “Ambassador in Chief”, advising both the POTUS and Secretary of State on Religious Freedom and Foreign Policy, and has helped leading celebrities and experts in their fields with public presentation, as well as how to live more meaningful and balanced lifestyles. Comfortable and competent in many arenas, she is known for her VIP “House Calls”, where she will meet clients at their place(s) of convenience and where their confidentiality is maintained: their home, their set, their jet, their “playing field”— their car or even the bar— in the privacy of their “safe space”.

She was a television producer with NBC and ABC and also served with CBS.

Ambassador Sujay has had a distinguished career in public service. Having worked for 2 Presidents of the United States of America, she has served as a Presidential Advisor, a White House Fellow on the Domestic Policy Council, and worked directly with 3 Cabinet Secretaries. Suzan participated in the historic Obama Presidential Inauguration and Administration as well as President Clinton's historic President's Initiative on Race. She is a leader in the political, law enforcement, and faith arenas and has been unanimously confirmed by the U.S. Senate. She is the 3rd Ambassador at Large for International Religious Freedom.

After attending Riverdale Country School, she received a Bachelors in Speech, cum laude, from Boston’s Emerson College, where she has also served on the Board and holds two Master’s Degrees, one of which is in Technology from Columbia University.  She also has an earned Doctorate.  An alumna of Harvard University, she served as an Officer, Associate Dean, and faculty member, teaching Speech and Communications to some of today’s most distinguished leaders. She is the author of ten books, including the best sellers Becoming a Woman of Destiny: Turning Life's Trials into Triumphs  (Tarcher/Penguin), Too Blessed to be Stressed (Thomas Nelson), and Sister to Sister (Judson).  A Native New Yorker, she has delivered more than 2,500 Speeches.