Steve Roberts has been a journalist for almost 50 years, covering some of the major events of his time, from the antiwar movement and student revolts of the 60s and 70s to President Reagan's historic trip to Moscow in 1988 and twelve presidential election campaigns.

A well-known commentator on many Washington-based TV shows, Roberts also appears regularly as a political analyst on the ABC radio network.

Please send me availability & fees for Steven Roberts
Thank you for your interest in this Harry Walker Agency speaker.
You will hear from one of our agents in the next 24 hours. If you have any other questions or information, please call us right away at 646.227.4900. Are you also interested in learning more about other speakers? Create a My Speaker List.
Rave Reviews About Steven Roberts
“
I wanted to let you know just how great Steve Roberts was and what a terrific turnout we had because people wanted to see him. He was fantastic!!! People did not want the program to end, they just seemed to want to stay to listen to him and ask their questions. He was great about the questions and was so sensitive to the people who were asking the questions. We literally had to end the program because we needed to get him to the airport on time. At the fundraising patron's luncheon prior to the program, he spoke about his book and his family and his life growing up in New Jersey and compared it to the Jewish community of Cleveland. He had obviously studied his materials that were sent to him about NCJW and mentioned our projects when appropriate. He was so unbiased in his lecture to the large group that most people could not figure out who he was supporting. He presented the facts in a very interesting and when appropriate, entertaining manner. We could not have asked for a better speaker for our opening major meeting. Approximately, 350 people made reservations to attend the program and then we had many walk ins. We were extremely pleased and have only heard positive feedback. He was truly a pleasure to listen to, especially in a presidential election year.

A View from Washington: The People and Politics of D.C.

A Washington veteran, Steven Roberts is a consummate political analyst and is well placed to explain the politics that dominate the news and affect the lives of all Americans. ...

A Washington veteran, Steven Roberts is a consummate political analyst and is well placed to explain the politics that dominate the news and affect the lives of all Americans.

Steven Roberts talks about becoming an American and becoming a writer, and the forces that shaped the life of this leading political analyst. ...

Steven Roberts talks about becoming an American and becoming a writer, and the forces that shaped the life of this leading political analyst. 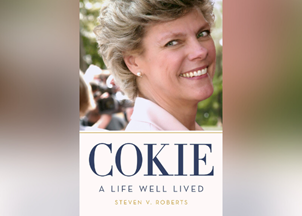 Through her visibility and celebrity, Cokie Roberts was an inspiration and a role model for innumerable women and girls. A fixture on national television and radio for more than 40 years, she also wrote five bestselling books focusing on the role of women in American history. Cokie had many roles in her lifetime: Daughter. Wife. Mother. Friend. Journalist. Advocate. Historian. Reflecting on her life, those closest to her remember her impressive mind, impish wit, infectious laugh, and the tenacity that sent her career skyrocketing through glass ceilings at NPR and ABC. They marvel at how she often put others before herself and cared deeply about the world around her. When faced with daily decisions and dilemmas, many still ask themselves the question, ‘What Would Cokie Do?’

In this loving tribute, Cokie’s husband of 53 years and bestselling-coauthor STEVE ROBERTS reflects not only on her many accomplishments, but on how she lived each day with a devotion to helping others. Her commitment to celebrating and supporting other women was evident in everything she did, and her generosity and passion drove her personal and professional endeavors. In Cokie, he has a simple goal: “To tell stories. Some will make you cheer or laugh or cry. And some, I hope, will inspire you to be more like Cokie, to be a good person, to lead a good life.”

Cokie: A Life Well Lived - Due Out November 2nd! From Every End of This Earth: 13 Families and the New Lives They Made in America My Fathers' Houses: Memoir of a Family

Steve Roberts has been a journalist for almost 50 years, covering some of the major events of his time, from the antiwar movement and student revolts of the 60s and 70s to President Reagan's historic trip to Moscow in 1988 and twelve presidential election campaigns. After graduating from Harvard magna cum laude in 1964, he joined the New York Times as research assistant to James 'Scotty' Reston, then the paper's Washington bureau chief. His 25-year career with the Times included assignments as bureau chief in Los Angeles and Athens, and as Congressional and White House correspondent. He was a senior writer at U.S. News for seven years, specializing in national politics and foreign policy. Roberts continues to write a nationally-syndicated newspaper column he previously co-wrote with his late wife, TV journalist Cokie Roberts. The column was named one of the ten most popular columns in America by Media Matters. In February of 2000 Steve and Cokie published From This Day Forward, an account of their marriage, as well as other marriages in American history. The New York Times called the book "inspiring and instructive" and it spent seven weeks on the Times bestseller list. Roberts also writes a bi-monthly column, Hometown, for Bethesda Magazine and is a regular book reviewer and travel writer for The Washington Post. His childhood memoir, My Fathers' Houses, was published in the spring of 2005 and was featured at the National Book Festival in Washington. In 2009 he published From Every End of This Earth, the story of 13 immigrant families and the new lives they've made in America. The book, which was also featured at the National Book Festival, started life in the feature writing course he teaches at GW and is dedicated to his students. In 2011 he wrote Our Haggadah (with his wife Cokie), which was featured on many national TV shows, including This Week and Morning Joe.

A well-known commentator on many Washington-based TV shows, Roberts also appears regularly as a political analyst on the ABC radio network and was a substitute host on NPR's Diane Rehm Show. As a teacher, he lectures widely on American politics and the role of the news media. Since 1997 he has been the Shapiro Professor of Media and Public Affairs at George Washington University, where he has taught for the last 23 years. His many honors include the Dirksen Award for covering Congress, the Wilbur Award for reporting on religion and politics, the Bender prize as one of GW's top undergraduate teachers, and four honorary doctorates. He's been named a Father of the Year by the Father's Day Council and received the Public Service Sector Award from the Aspen Institute. Steve and Cokie have two children: Lee, a banker in Raleigh, NC, and Rebecca, a program specialist for the Smithsonian Institution in Washington, and six grand-children. In his spare time, Roberts plays tennis and roots for his grand-children’s sports teams.