Producer, director and screenwriter Ryan Coogler is behind history and headline-making films including Fruitvale Station, Creed, and The Black Panther, the last of which shattered box office records and became the highest-grossing film of all time by a black director. Named to TIME's "30 People Under 30 Who Are Changing the Word," Coogler's work is not just critically and commercially successful, but has been hailed for celebrating often overlooked cultures and characters and bringing unprecedented diversity to the silver screen.

Having always harbored a talent for storytelling, Coogler discovered his own passion for filmmaking as a college freshman, and began shooting shorts with his teammates and friends. From winning the Dana and Albert Broccoli Award for Filmmaking Excellence at the Tribeca Film Festival for his short Locks, to the U.S. Grand Jury Prize for dramatic film at Sundance for Fruitvale Station, to three Oscars as director and co-writer for Black Panther, Coogler's work resonates with and empowers audiences worldwide.

As a speaker, Coogler offers eye- and mind-opening insights on the power of storytelling, racial equality, and innovative approaches to changing the world. 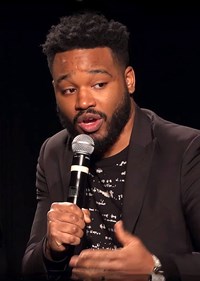 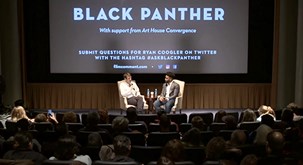 Please send me availability & fees for Ryan Coogler
Thank you for your interest in this Harry Walker Agency speaker.
You will hear from one of our agents in the next 24 hours. If you have any other questions or information, please call us right away at 646.227.4900. Are you also interested in learning more about other speakers? Create a My Speaker List.
Rave Reviews About Ryan Coogler
“
We would love to express our sincere thanks to Ryan for his participation in the closing keynote for Salesforce’s 2nd Annual Representation Matters: Racial Equality Summit. Ryan was a firm favorite both with the team and the audience, we loved that he's a genuine ally to these groups (and also to female talent) on and off screen.

Ryan Coogler was born in Oakland, CA. He was an avid student-athlete and earned a football scholarship to St. Mary's College and later transferred to California State University, Sacramento, where he graduated with a degree in Finance.

Having always harbored a talent for storytelling, Ryan discovered his own passion for filmmaking as a college freshman, and began shooting shorts with his teammates and friends. After being admitted into the USC School of Cinematic Arts, he went on to create his award winning shorts Locks, Fig and Gap. Locks was shown at Tribeca Film Festival and was winner of Dana and Albert Broccoli Award for Filmmaking Excellence, Gap received the Jack Nicholson Award for Achievement in Directing, and Fig won the HBO Short Filmmaking Award, DGA Student Filmmaker Award, and was nominated for the Black Reel Award for outstanding independent short film.

After receiving his M.F.A., he began to work as a juvenile hall counselor before creating his first feature film Fruitvale Station, which debuted at the 2013 Sundance Film Festival. The film went on to win both the U.S. Grand Jury Prize for dramatic film and the Audience Award for U.S. dramatic film, two of the festival’s top honors. Following its success at Sundance, Fruitvale Station competed at the 2013 Cannes International Film Festival and won the Cannes Prix L'avenir Award in Un Certain Regard. The film was produced by actor Forest Whitaker, stars Michael B. Jordan and Octavia Spencer.

Coogler still resides in the Bay Area with his wife Zinzi Evans.