Dr. Ruth Westheimer is a psychosexual therapist who pioneered speaking frankly about sexual matters on radio with her program, Sexually Speaking.

She never envisaged that one day she would be making such wide use of the mass media to help spread what she has labeled "sexual literacy." However, with her unique style, she has been able to communicate effectively through almost every avenue available.

Please send me availability & fees for Ruth Westheimer
Thank you for your interest in this Harry Walker Agency speaker.
You will hear from one of our agents in the next 24 hours. If you have any other questions or information, please call us right away at 646.227.4900. Are you also interested in learning more about other speakers? Create a My Speaker List.
Rave Reviews About Ruth Westheimer
“
Thank you for being the keynote speaker at our Valley Alliance Major Gift Dinner. It was a spectacular evening that reached out to major donors as well as provided an opportunity to thank all those who contribute so generously every year. You are such a wonderful, intelligent, personable, and warm woman. You made every one of our guests feel special. Thank you for posing for so many photographs...and for taking so much time to answer questions and speaking to everyone. It was a pleasure to work with you. You truly care about the Jewish Community. You helped fill the room with warmth and a wonderful community spirit.

In her speeches, Dr. Ruth advises audiences on every issue concerning love, sex, and health issues. No matter what you need to know, Dr. Ruth can explain it in no-nonsense terms, without being judgmental and with a good dose of fun. ...

In her speeches, Dr. Ruth advises audiences on every issue concerning love, sex, and health issues. No matter what you need to know, Dr. Ruth can explain it in no-nonsense terms, without being judgmental and with a good dose of fun. 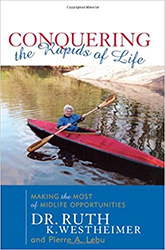 Conquering the Rapids of Life: Making the Most of Midlife Opportunities

Sexually Speaking: What Every Woman Needs to Know About Sexual Health 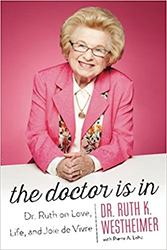 The Doctor Is In: Dr. Ruth on Love, Life, and Joie de Vivre

Dr. Ruth, 87, still shocking us with her sex talk - The Washington Post
Biography

Dr. Ruth Westheimer is a psychosexual therapist who pioneered speaking frankly about sexual matters on radio with her program, Sexually Speaking.   It began in September of 1980 as a fifteen minute, taped show that aired Sundays after midnight on WYNY-FM (NBC) in New York. One year later it became a live, one-hour show airing at 10 PM on which Dr. Ruth, as she became known, answered call-in questions from listeners.  Soon it became part of a communications network to distribute Dr. Westheimer's expertise which has included television, books, newspapers, games, home video, computer software and her own website, www.drruth.com and Tweets as @AskDrRuth. She has launched her own line of low alcohol wines, Dr. Ruth's Vin D'amour and is teaching at her alma mater, Columbia's Teachers College. And there's even a play about her life, Becoming Dr. Ruth, written by Mark St. Germain which has starred Debra Jo Rupp of That 70's Show in New York, the Berkshires, Hartford and Ft. Lauderdale and is being produced in other cities with other actresses.

Born in Germany in 1928, Dr. Westheimer was sent to a children’s home in Switzerland at the age of ten which became an orphanage for most of the German Jewish students who’d been sent there to escape the Holocaust.  At 17 she went to then Palestine where she fought for that country's independence as a member of the Haganah, the Jewish freedom fighters.  She then moved to Paris where she studied at the Sorbonne and taught kindergarten.  She immigrated to the U.S. in 1956 where she obtained her Masters Degree in Sociology from the Graduate Faculty of the New School of Social Research.  In 1970, she received  a Doctorate of Education (Ed.D.) in the Interdisciplinary Study of the Family from Columbia University Teacher's College.

She worked for Planned Parenthood for a time and it was that experience that prompted her to further her education in human sexuality by studying under Dr. Helen Singer Kaplan at New York Hospital-Cornell University Medical Center.  She later participated in the program for five years as an Adjunct Associate Professor.  She has also taught at Lehman College, Brooklyn College, Adelphi University, Columbia University and West Point.

Currently Dr. Westheimer is an Adjunct  Professor at N.Y.U. and an Associate Fellow of Calhoun College at Yale University, and a Fellow of Butler College at Princeton University. She is a fellow of the New York Academy of Medicine and in addition to having her own private practice, she frequently lectures at universities across the country and has twice been named "College Lecturer of the Year."

During her early days as a college professor, Dr. Westheimer never envisaged that one day she would be making such wide use of the mass media to help spread what she has labeled "sexual literacy."  However, with her unique style, she has been able to communicate effectively through almost every avenue available.  In addition to radio, her television career has spanned both broadcast and cable.  Her first TV show aired locally in New York but she soon went national on Lifetime's The Dr. Ruth Show.  Ask Dr. Ruth was syndicated both nationally and internationally by King Features Entertainment so that she became a regular in such places as London and Hong Kong as well as America. The All New Dr. Ruth Show brought her back to Lifetime and with What's Up, Dr. Ruth she helped broaden Lifetime's appeal with teens. You're On The Air with Dr. Ruth brought her back to the format she began with on television with both guests and live phone calls.  In the Fall of 1992 she reached out to adult Americans with Never Too Late which was broadcast on Nostalgia Television. Lately she has been reaching the younger set teaching puppets how to read long words on the PBS series, Between The Lions. In 2007 and 2008, she had a series of regular visits to Retirement Living TV, and in 2007 she also had a show on MTV U, a station that is broadcast to 750 college campuses and is also on the web. Segments from these shows can now be seen on her YouTube channel, www.youtube.com/drruth.  She also has her own website, www.drruth.com and is on Twitter  @AskDrRuth.  And the BBC production Extraordinary Women has filmed an episode about her life which has aired on PBS stations across the country and around the world.

Her first video was entitled Terrific Sex and she later did two more for Playboy. In the Fall of 1993 Dr. Ruth had her own weekly series in Hebrew on Israeli television as well as a five minute weekly "strip" on Great Britain's This Morning program.  Her other foreign ventures have included spots on Radio Television Luxembourg, German Swiss Television and France's TF-1.    In 1991, she donned the title of Executive Producer for a documentary on Ethiopian Jews titled "Surviving Salvation." Filmed by the Academy Award winning Malcolm Clarke, the documentary aired nationally on PBS.  Her second documentary, entitled  “No Missing Link”, also received national airing on PBS in 2002 and was about how grandparents have transmitted values, particularly religious values during the 70 years of communism in Russia. She followed that up with “The Olive and The Tree: The Secret Strength of the Druze” which aired nationally on PBS stations in early 2007. This program was accompanied by a book of the same name. Her next was, Shifting Sands: Bedouin Women at the Crossroads which aired on PBS stations across the country and also has an accompanying book. Her last documentary is on the Circassians, and the accompanying book is entitled The Unknown Face of Islam.

In print she circles the globe with her column, Ask Dr. Ruth, syndicated by King Features.  She is the author of forty-one, and counting. (See list on last page.)   There were also Dr. Ruth's Good Sex Night-to-Night Calendar (1993 & 1994) and a board game, Dr. Ruth's Game of Good Sex, which Victory Games released in a version for computers.  Unrelated to her vocation was her part in the French film by Daniel Vigne, One Woman or Two, which starred Gerard Depardieu and Sigourney Weaver and in which she played the part of a wealthy philanthropist.  She also starred in a pilot for ABC titled Dr. Ruth's House and appeared in an episode of Quantum Leap.  She’s been featured on TV commercials for Clairol Herbal Essence, Honda, Pepsi, Entenmann’s and many other products. She also narrated two children's stories, Little Red Riding Hood and Goldilocks and the Three Bears, on a CD entitled Timeless Tales And Music Of Our Time, a project by An die Musik (Oboe, String trio & Piano) for Newport Classics records which received a Grammy nomination (2002).

She is currently serving as the Honorary President of the Council on Sexuality and Aging at the National Sexuality Resource Center. The National Mother's Day Committee has honored Dr. Ruth as "Mother Of The Year", she received a Liberty Medal from the City of New York and the Israel Cultural Award from Israel Bonds.  She has been nominated for an Ace Award by the cable industry on five occasions and her program, The All New Dr. Ruth Show won an Ace Award in 1988 for excellence in cable television.  What's Up, Dr. Ruth was awarded the Gold Medal from the International Film and TV Festival for excellence in educational television.  People Magazine included her in their list of the Most Intriguing People of the Century.  In May of 2000 she  received an Honorary Doctorate from Hebrew Union College - Institute of Religion for her work in Human Sexuality and her commitment to the Jewish People, Israel and Religion. In June, 2001 she received an Honorary Doctorate in Humane Letters from CUNY's Lehman College. In 2002 she received the Ellis Island Medal of Honor and the International Society for Sexual and Impotence Research 20th Anniversary Award and the Leo Baeck Medal. In June, 2004 she was awarded an honorary doctorate from Trinity College in Hartford, CT. In June of 2006, Columbia University’s Teacher’s College awarded her their Medal For Distinguished Services. She received the Yale Mental Health Research Advocacy Award at the 2012 annual National Alliance for Mental Illness (NAMI) research advocacy symposium.  In 2013 she was awarded the Margaret Sanger Award from Planned Parenthood. She is a board member of the YMHA of Washington Heights, where she served as president for eleven years, as well as the Museum of Jewish Heritage: A Living Memorial to the Holocaust.  She was the Grand Marshal for the Steuben Day Parade, the German-American Fifth Avenue parade, in  2010. Dr. Westheimer has two children, four grandchildren and resides in New York City.