Roy Firestone is an incredible performer.    His one man show is a highly energetic mixture of storytelling, music, humor, uncanny vocal impressions, hilarious and unforgettably moving video clips and heart rendering observations. The show is a celebration of life not just through the prism of sports but in his 20-year association with the greatest names in American public life. Whether it’s Firestone’s witty and satiric look at American sports or his touching story telling that evoke both laughter and tears, Firestone delivers a standing-ovation winning One Man Show that is truly unprecedented in both keynote speaking and entertainment circles. Roy Firestone’s One-Man Show . . . Up Close Live is like the champions he interviews . . . a winner!

Please send me availability & fees for Roy Firestone
Thank you for your interest in this Harry Walker Agency speaker.
You will hear from one of our agents in the next 24 hours. If you have any other questions or information, please call us right away at 646.227.4900. Are you also interested in learning more about other speakers? Create a My Speaker List.
Rave Reviews About Roy Firestone
“
“Roy was fabulous! He was hysterically funny, extraordinarily talented and inspirational. We laughed and cried…I would hire him again in a heartbeat!”

If you are looking to create a captivating and intimate Q&A session and you need a moderator who will get the most out of your special guest, look no further than Roy Firestone. Mr. Firestone knows how to create a comfortable and reflective environment during his interviews that will ultimately ...

If you are looking to create a captivating and intimate Q&A session and you need a moderator who will get the most out of your special guest, look no further than Roy Firestone. Mr. Firestone knows how to create a comfortable and reflective environment during his interviews that will ultimately make your audience feel as if they were listening to a conversation over an intimate dinner rather than in an auditorium.

Mr. Firestone has created robust and engaging conversations with leading CEOs, business entrepreneurs, actors, musicians, sports figures and many industry luminaries. As part of this type of program, Mr. Firestone does all the advance legwork of preparing an engaging multi-media presentation of the person’s life which he shares with the audience during key moments of the conversation.

Artists love being interviewed by Roy Firestone because they know they are in capable hands, so they can just sit back, relax and share their lives, insights, motivations, etc. with Mr. Firestone and your audience.

Whether you are looking to bring a legendary star to your event or an innovative CEO, let Roy Firestone help bring the best out of your special guest and create an event your audience will never forget!

An accomplished singer, impressionist and humorist, Roy Firestone has performed his acclaimed Multi-Media Review before audiences in Las Vegas, at major sporting events, meetings, formal events and conventions throughout the world. ...

An accomplished singer, impressionist and humorist, Roy Firestone has performed his acclaimed Multi-Media Review before audiences in Las Vegas, at major sporting events, meetings, formal events and conventions throughout the world. 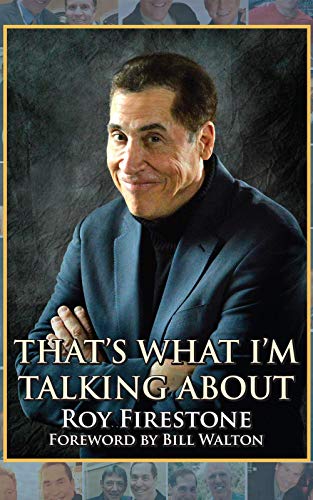 That's What I'm Talking About

Roy Firestone is a seven-time Emmy Award-winning and seven-time cable ACE Award-winning host, interviewer, narrator, writer, and producer.  As the ground-breaking, original host of ESPN’s legendary Up Close, Up Close Classic and Up Close Primetime, Firestone has interviewed more than 5,000 athletes, musicians, actors and political figures, as well as scores of writers and filmmakers.

Roy Firestone is also one of the nation’s most sought after live corporate performers, keynote speakers and lecturers.

His numerous television credits include Everybody Loves Raymond and Married with Children.  Fans of The Simpsonsremember him as the voice of ‘Bart Starr.’ No stranger to talk shows, Firestone’s appearances include Late Night with David Letterman, Later with Bob Costas, Larry King Live and The Tonight Show.

Firestone is an accomplished musical vocalist.  He recently released his first CD, Another Voice, produced and backed by Grammy Award-winning fusion band, Hiroshima.

Firestone is also prolific on the printed page — as the author of two best-selling books, Up Close with Roy Firestone, and most recently, Don’t Make Me Cry, Roy.