Irish tenor, recording artist, physician, and champion disabled athlete Ronan Tynan moves audiences like few others can. His stirring performances and personal story of triumph have brought him international fame. The New York Times called him “the closest thing this country has to an official Meistersinger.”

Tynan has performed at historic events including Ronald Reagan’s funeral and the Inaugural Prayer Service at the National Cathedral. His memorable renditions of “God Bless America” have been heard at the World Series, The Belmont Stakes, and other momentous events.

Profiled by ABC’s 20/20, People magazine and CBS Sunday Morning, Tynan was born with a lower limb disability and had his legs amputated at age 20. Within a year, he was competing in the Paralympic Games, both in track and field and as an equestrian. He won 18 gold medals and set 14 world records, nine of which are still in place today.

The first disabled person ever admitted to Limerick’s National College of Physical Education, Tynan became a physician specializing in orthopedic sports injuries and was the subject of the BBC documentary, Dr. Courageous.

In 1992 less than one year after he began studying music, Tynan won the John McCormack Cup for Tenor Voice. He shot to stardom two years later after winning the BBC talent show, Go For It. A recording contract with Sony Music and sold-out concerts around the world soon followed. His debut album, My Life Belongs to You, released in 1998, jumped to number five on the charts. That same year, Tynan joined Anthony Kearns and John McDermott as The Irish Tenors, an instant worldwide sensation.

Tynan’s album Ronan debuted at #2 on Billboard’s Classical Crossover Chart. He put out Sing Me an Irish Song, a collection of Irish favorites in 2009 and his latest album, All Kinds Of Everything, features classic performances from his musical career. Tynan captivates audiences with his humor, lively spirit and inspirational message about overcoming obstacles and living life to the fullest.

Please send me availability & fees for Ronan Tynan
Thank you for your interest in this Harry Walker Agency speaker.
You will hear from one of our agents in the next 24 hours. If you have any other questions or information, please call us right away at 646.227.4900. Are you also interested in learning more about other speakers? Create a My Speaker List.
Rave Reviews About Ronan Tynan
“
Mesmerizing! Had us crying one minute, doubled over with laughter the next.

Hitting the High Notes: Living Life to the Fullest

An inspirational program — with storytelling, humor and song about overcoming obstacles, capitalizing on opportunities, and making the most out of life. ...

An inspirational program — with storytelling, humor and song about overcoming obstacles, capitalizing on opportunities, and making the most out of life.

The Power of the Mind over the Body 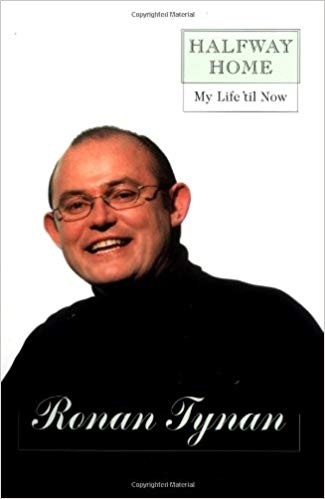 Halfway Home: My Life 'til Now

Ronan Tynan is truly a modern day “Renaissance Man.” Faced with numerous challenges throughout his well documented life, he has persevered with enormous passion and determination.  He attributes his success to his faith and the knowledge that the Man Above guides him through every door he opens.  Introduced to international audiences as a member of the Irish Tenors, Tynan quickly became known for his unique voice and irresistible appeal. Following his mother’s advice to always follow your dreams, Tynan decided to launch a solo career, and has achieved the fame and adoration that could have existed only in the farthest reaches of his dreams.

Tynan’s singing offered the gentlest consolation at the funeral of President Ronald Reagan in the summer of 2004, when an international TV audience of more than 35 million heard him sing “Amazing Grace” and Schubert’s “Ave Maria,” at the personal invitation of Nancy Reagan. Ronan is also famous for his performances of “God Bless America” at Yankee Stadium during the seventh-inning stretch, which he says have been nothing short of unforgettable.  In 2006 he started an affiliation with the Buffalo Sabres hockey team and has performed “God Bless America” at many of their games.

Ronan’s ability to simultaneously console and inspire is well-documented. In the wake of 9/11, the men and women of the New York Police Department and New York Fire Department and their families have been able to count on Ronan Tynan’s abiding concern and beautiful voice. Ronan has performed at benefits and memorial services for New York’s Finest and Bravest, and his singing softened the sorrow of many in the wake of the tragedy.

Of course, there have been plenty of joyous moments in Ronan’s career as well. In the spring of 2004, the Belmont Stakes got off to a rollicking start when Tynan—a passionate horseman himself—christened the race with a ringing rendition of “New York, New York.” This is of particular interest marking the first time ever in Belmont’s 30-year history that a singer was invited to perform live as they traditionally play the version recorded by Frank Sinatra. Tynan has performed for countless dignitaries worldwide including the wedding of New York’s former Mayor Rudolph Giuliani to Judith Nathan on the grounds of Gracie Mansion. His voice also brightened the 80th birthday celebration of former President George H.W. Bush in the summer of 2004 in Houston.

In the spring of 2005, Ronan released his self-titled debut album, which began a new era in his career. “I think it shows a greater versatility than any other album I’ve done,” Tynan has said. “I wanted to sing a greater variety of music and spread my wings a bit, make a move out of the classic ‘Irish tenor’ vein.” The album contains the heartfelt “Passing Through,” which honors Ronan’s mother, whose vibrant spirit has been taken away by the long night of Alzheimer’s disease. Ronan debuted #2 on Billboard’s Classical Crossover Chart, just behind Josh Groban, and was the 8th best-selling classical crossover album of 2005. It also reached #2 on the World Album Chart and peaked at #9 on the Contemporary Christian Chart. His career has also been well-documented with appearances on Primetime Live, Good Morning America, the Hour of Power, 700 Club, Fox & Friends and many other high-profile television shows.

Ronan sang at the White House Governors’ Ball at the invitation of President and Mrs. Bush in February, 2007, and in 2008 returned to the White House to sing at the St. Patrick’s Day Reception attended by members of the U.S. and Irish governments.  He performed during the Concert of Hope prior to the Papal Mass at Yankee Stadium in April, 2008.  He is currently in the recording stages of two upcoming CD releases, one an all-Irish CD, and a second collection of songs performed at his concerts and requested by fans throughout the world.  In 2007 due to popular demand, he released a DVD of his motivational speech: Hitting the High Notes, Living Life to the Fullest.

Though Ronan enjoyed singing as a boy, he did not seriously consider formal voice study until he was 33, when he was well into his residency as a physician. His quick success is a typical development in a life of extraordinary achievement. Born with lower limb disability that threatened to sideline him throughout his childhood, Tynan was still “as wild as a March hare” when he was a growing boy, riding horses and racing motorcycles.  When he was twenty, his legs had to be amputated below the knee after an auto accident caused serious complications. Just weeks after the operation, he was climbing up the steps of his college dorm, and within a year, he was winning gold medals in the Paralympics as a multitalented athlete. Between 1981 and 1984, Tynan amassed eighteen gold medals and fourteen world records of which he still holds nine.

The determination instilled in Ronan by his parents, a diminutive couple with gigantic ambitions for their son, soon propelled him to conquer a whole new field. Tynan became the first disabled person ever admitted to the National College of Physical Education. He later became a full-fledged medical doctor, specializing in orthopedic sports injuries, with a degree from prestigious Trinity College.

Ronan won both the John McCormack Cup for Tenor Voice and the BBC talent show Go For It less than one year after beginning the study of voice.  The following year, he won the International Operatic Singing Competition in Maumarde, France.  He made his operatic debut as Pinkerton in Puccini’s Madame Butterfly, and cut his teeth on the concert repertoire in performances of Verdi’s Requiem, Mendelssohn’sElijah, Handel’s Messiah, Rossini’s Stabat Mater, and Puccini’s Messa di Gloria.  In 1998, Tynan joined Anthony Kearns and John McDermott (later Finbar Wright) as The Irish Tenors, an instant worldwide sensation.  His autobiography Halfway Home was published in February of 2002.

Ronan is one of the most sought after motivational speakers in the U.S., presenting nearly 50 speeches annually for major international corporations and organizations.

The big Irishman has a special relationship with American audiences now.  “America is powerful and intense, and it begs you to take it on,” Tynan marvels.  “If you do that and do it right, it will give you absolutely everything you want. The thing I love about America is that there are so many people who want you to do well. They will you to do well. They encourage you, and they rejoice in your success. That’s a great virtue. I think Americans are fantastic people, amazing,” he says. And while Tynan claims that America has given him so much more than he’ll ever be able to give back, those who have attended his concerts, basking in the stirring beauty of his music and rolling with laughter at his self-effacing humor, may well just have to disagree.