Best known as the star of the explosively successful "The Night Of" on HBO, for which Ahmed became the first man of  Asian descent to win an acting award at the Emmys, Ahmed has graced the cover of TIME’s “100 Most Influential People” and earned inclusion in the "Variety 500."

As Riz MC, Ahmed came up in the London music scene as a rap battle champion, going on to write and perform both as a solo artist and with his band, Swet Shop Boy. A vocal activist and advocate, Ahmed has raised awareness and funds for Rohinya and Syrian refugees, and his award-winning piece in the Nikesh Shukla–edited collection of essays, The Good Immigrant, has been dubbed “essential reading.”

Ahmed has been sought-out to speak everywhere from the British Parliament’s House of Common,  where he was an invited guest to speak on  diversity, to the BBC, where he’s spoken on harmful stereotypes and representation. He provides powerful remarks on diversity and inclusion, combating negative stereotypes, and harnessing creativity for good.

Play
Now
In Conversation clip - The Curse and the Gift Are the Same | TriNet [3:56] 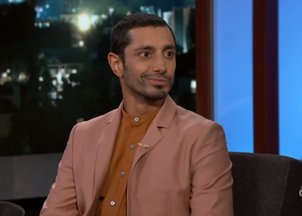 RIZ AHMED is an Emmy award-winner making waves and garnering praise for his work as an actor, writer, producer, and activist. Starring in the explosively successful The Night Of on HBO, Ahmed became the first man of Asian descent to win an acting award at the Emmys for his performance, graced the cover of TIME’s “100 Most Influential People” , and earned a spot in the "Variety 500."  Ahmed has had a dynamic career from the start, always choosing to lean into his passions, try new things, and advocate for others along the way. This ethos has served Ahmed well as he transitioned his career from rap battle champion to award-winning actor, writer, and director. Now an established star with projects like Rogue One, The Sound of Metal, and Mogul Mowgli under his belt, Ahmed is using his standing to advocate for better representation of Muslims in Hollywood, on and off camera. He is sponsoring a USC study, “Missing & Maligned: The Reality of Muslims in Popular Global Movies,” writing “The Blueprint for Muslim Inclusion” in filmmaking and creating the Pillars Artist Fellowship for up-and-coming Muslim storytellers. His initiatives have garnered coverage and praise from such publications as BBC, NPR, Paper, and Variety.

Emmy award winner Riz Ahmed is a critically acclaimed actor, writer, creator, producer, musician, director and activist. He became one of Hollywood’s most sought after artists following the explosive success of HBO’s THE NIGHT OF, written and created by the legendary Steven Zaillan, for which he won an Emmy Award, and was Golden Globe and SAG nominated. He went on to star in successful feature films including Disney’s ROGUE ONE: A STAR WARS STORY, Jacques Audiard’s THE SISTERS BROTHERS and most-recently Sony/Marvel’s VENOM. He first garnered industry attention in festival favorites FOUR LIONS and NIGHTCRAWLER.

Up next, Ahmed stars in director Darius Marder’s SOUND OF METAL about a professional drummer’s descent into unexpected hearing loss. The film premiered at the 2019 Toronto Film Festival to career-topping performance reviews and was acquired by Amazon Films for an August 2020 release. Additionally, MOGUL MOWGLI, directed by Bassam Tariq, debuted at the 2020 Berlin Film Festival — a film that Ahmed stars in, co-wrote and produced. In the film, he portrays a young British rapper about to start his first world tour when a crippling tragedy strikes.

Also on the horizon, Ahmed will star in and executive produce the fantastical love story, EXIT WEST, based on the best-selling novel by Pakistani author Mohsin Hamid. The feature film is being developed by Netflix and in collaboration with the Obamas' Higher Ground Productions, and Ahmed’s production company Left Handed Films.

Additional productions under the Left Handed Films banner include a modern-day feature film take on HAMLET and a nine-part TV drama series called ENGLISTAN, a revisionist history following a British-Pakistani family over 40 of the most eventful years of recent British history. Ahmed co-wrote and will star in both projects.

As Riz MC, Ahmed came up in the London music scene as a rap battle champion, going on to write and perform both as a solo artist and with his band, Swet Shop Boys. His provocative solo release Post 9/11 Blues was banned before a viral groundswell forced it into radio, and Englistan was critically acclaimed for its exploration of identity. The Swet Shop Boys album, Cashmere, landed the group prestigious gigs including Coachella and Glastonbury. In a nod to their cultural impact, participants at the Los Angeles International Airport protest against Trump’s immigration ban were heard chanting lyrics from “T5.”

Most recently, Ahmed released his latest album “The Longest Goodbye” on his own record label Mongrel Records; the album includes nine tracks about Ahmed being “dumped by a post-Brexit Britain,” and was accompanied by a short film of the same title.

As a vocal advocate for inclusion, Ahmed published an award-winning piece in the Nikesh Shukla; the edited collection of essays “The Good Immigrant” has been described as “essential reading.” In spring 2017, he spoke at the prestigious British Parliament’s House of Commons about diversity and representation. That same year, he graced the cover of TIME’s 100 Most Influential People. His recent work has also earned him a place in the Variety 500.