In 2017, she marked her thirteenth summit as SING IT NOW: SONGS OF FAITH & HOPE topped both the Billboard Country and Christian/Gospel charts, bolstering Reba’s successful record of 35 No. 1 singles and over 56 million albums sold worldwide. The double-disc collection earned Reba her first GMA Dove Award for Bluegrass/Country/Roots Album of the Year and third GRAMMY® Award for Best Roots Gospel Album. On April 5, 2019, she released her new album STRONGER THAN THE TRUTH on Big Machine Records. Reba co-produced the 12-track project with Buddy Cannon in Nashville.

The Oklahoma native is an acclaimed actress with 11 movie credits to her name, a lead role on Broadway in Irving Berlin’s Annie Get Your Gun and starred in the six-season television sitcom Reba. In 2005, she partnered with Dillard’s to launch her own lifestyle brand, and most recently launched the REBA by Justin™ western footwear collection at select retailers nationwide. She was named the first female and musician to portray KFC’s iconic founder Colonel Harland Sanders in the brand’s celebrity colonel campaign. Throughout 2019, she will bring that same bubbly energy and penchant for excellence to Las Vegas as part of the longest-running Country residency in The Colosseum’s history alongside her superstar pals for REBA, BROOKS & DUNN: Together In Vegas at Caesars. 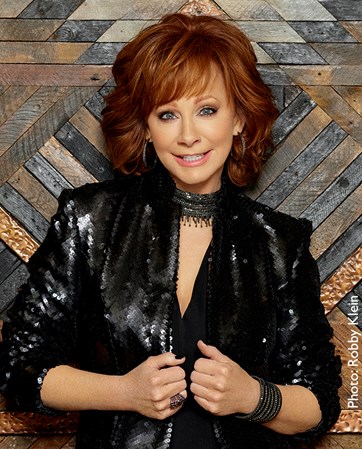 Please send me availability & fees for Reba McEntire
Thank you for your interest in this Harry Walker Agency speaker.
You will hear from one of our agents in the next 24 hours. If you have any other questions or information, please call us right away at 646.227.4900. Are you also interested in learning more about other speakers? Create a My Speaker List.
Rave Reviews About Reba McEntire
“
Reba was terrific! She is so sincere, real, and a truly great interview. The audience absolutely LOVED her for her warmth and her candor about the pathway of her life from humble beginnings etc.

Born March 28, 1955 in McAlester, OK, Reba Nell McEntire was destined to shine. Throughout her iconic life, Reba has established herself as a powerhouse vocalist whose talent transcends musical boundaries. From the top of the Country charts to the Broadway stage, she has repeatedly demonstrated her ability to inhabit any style of song with an authority and passion that has made her a household name from stage to screen.

The third of four children, she was raised on her family’s 8,000-acre ranch in Chockie, OK. The troupe travelled frequently to watch her World Champion Steer Roper (1957, 1958, 1961) father Clark Vincent and 1934 winner grandfather John McEntire. She would later follow in the family tradition as barrel racer from age 11 until 21. Her mother Jacqueline Smith, a former schoolteacher and secretary, had dreams of being a Country music singer, but found herself teaching the siblings to harmonize on their long car trips instead.

Throughout adolescence, Reba joined her older brother Pake and younger sister Susie as members of the Kiowa High School Cowboy Band before forming their own group, The Singing McEntires. With the support of their family, they performed frequently at rodeos, clubs, and dance halls. After high school, Reba attended Southeastern Oklahoma State University, graduating in 1976 with a major in elementary education and a minor in music – a combination that followed her mother’s practicality and aspirations.

On December 10, 1974, Reba sang the National Anthem at the National Rodeo Finals in Oklahoma City, ultimately defining her trajectory. Notable entertainer Red Steagall was so impressed that he invited her to Nashville to record demos for his music publishing company and shopped her tapes to secure Reba a deal with Polygram Mercury Records in November 1975. Reba worked steadily to build her career and was invited to debut on the Grand Ole Opry on September 17, 1977. The momentum continued with Top 20 with songs such as “Three Sheets in the Wind” (with Jacky Ward) and her cover of Patsy Cline’s “Sweet Dreams,” in addition to her first Top 10 hit with “(You Lift Me) Up to Heaven” and Top 5 “Today All Over Again.” Showing career growth, her UNLIMITED album featured Reba’s first two No. 1 hits: “Can’t Even Get the Blues” and “You’re The First Time I’ve Thought About Leaving.”

Reba moved to MCA Records in 1983, and realized her desire for more control over her song selection and album production. She released MY KIND OF COUNTRY in 1984, producing No. 1s “How Blue” and “Somebody Should Leave.” That same year she won the CMA Female Vocalist of the Year and went on to take the trophy for four consecutive years (1984-1987) before taking home further honors in 1986 when she joined the Grand Ole Opry and was named CMA Entertainer of the Year for her remarkable showmanship.

A bonafide superstar, Reba’s 1986 GOLD-certified album WHOEVER’S IN NEW ENGLAND saw chart-toppers with the title track and “Little Rock,” and throughout the 1980s she continued to rule the charts with early fan favorites like “The Last One to Know” and “Love Will Find Its Way to You.” This time period gave birth to Reba’s acting skills through her elaborate, story-telling music videos, which earned her multiple awards and became a signature of her brand.

After getting a taste of acting from her music videos, Reba began exploring her options in Hollywood and first appeared alongside Kevin Bacon and Michael Gross in “Tremors” (1990). Over the years, she would continue with roles in movies such as “North” (1994), “The Little Rascals” (1994) and “One Night at McCool’s” (2001). She also appeared in a string of television movies – “The Gambler Returns: The Luck of the Draw” with Kenny Rogers in 1991; “The Man From Left Field” with Burt Reynolds in 1993; “Is There Life Out There?” in 1994 (based on her hit song and music video); “Buffalo Girls” in 1995 (where she first played Annie Oakley); “Forever Love” in 1998 (also based on her hit song); and “Secret of Giving” in 1999. Her distinctive voice was heard as the goddess Artemis in the animated television series “Hercules” (1998); Betsy the Cow in the movie “Charlotte’s Web” (2006); and Dixie the dog in the animated movie “The Fox and the Hound 2” (2006) and Etta the Pteranodon in the animated movie “The Land Before Time: Journey of the Brave” (2016).

But she was never far away from the music, as hits stacked up with “You Lie,” “Rumor Has It,” “Fancy,” “Is There Life Out There,” “The Night the Lights Went Out In Georgia,” “Take It Back,” “The Heart Won’t Lie” (a duet with Vince Gill), “Does He Love You” (a duet with Linda Davis, which won the 1994 CMA Vocal Event of the Year as well a Grammy Award for Best Country Collaboration with Vocals), “Why Haven’t I Heard From You,” “The Heart is a Lonely Hunter,” “She Thinks His Name Was John,” “On My Own” (with Davis, Martina McBride, and Trisha Yearwood), “The Fear of Being Alone,” “I’d Rather Ride Around With You,” “How Was I to Know,” “Forever Love,” “If You See Him/If You See Her” (with Brooks and Dunn).

In 2001, Reba defied critics and triumphed when she took over the role of Annie Oakley in the Broadway play “Annie Get Your Gun,” bringing new life to the production with rave reviews, sold-out performances, a Drama Desk Award and an Outer Critics Circle Award. After performing on Broadway, Reba moved to Los Angeles to begin her popular television sitcom “Reba” for the WB Network (later renamed the CW Network). The show remained in production for six seasons before gaining even a larger audience through syndication re-runs on CMT and ABC’s Freeform. While starring in and producing the television series, Reba continued to succeed in music with hit songs such as “I’m a Survivor” (the sitcom’s theme song), “I’m Gonna Take That Mountain,” “He Gets That From Me,” “My Sister” and No. 1 hit “Somebody.”

Parlaying her life experiences and entertainment from stage to screen, the Oklahoma native has seen many of her dreams come true over the last four decades. Reba has earned numerous awards, scoring 35 No. 1 singles and selling more than 56 million albums worldwide to be deemed one of the most successful female recording artists in history. The Country Music Hall of Fame, Grand Ole Opry and Hollywood Bowl member has also won 16 ACM Awards, 15 American Music Awards, 9 People’s Choice Awards and 6 CMA Awards. Her leadership and philanthropic endeavors have been recognized with the Andrea Bocelli Foundation Humanitarian Award, the Leadership Music Dale Franklin Award, the Minnie Pearl Humanitarian Award, the Music Biz Chairman’s Award, the National Artistic Achievement Award from the U.S. Congress and being inducted into the Horatio Alger Association. Reba was also named Billboard magazine’s first-ever Woman of the Year, besting the likes of Jennifer Lopez and Celine Dion. As one of world’s best creators, Reba shares her vast knowledge as a MasterClass instructor through engaging online classes for a uniquely powerful educational experience.

In 2017, Reba marked her thirteenth summit as SING IT NOW: SONGS OF FAITH & HOPE topped both the Billboard Country and Christian/Gospel charts. The double-disc inspirational collection earned Reba her third GRAMMY® Award and first GMA Dove Award.  She also led the ratings-high CMA Country Christmas television special that December before returning for a fifteenth time to host the ACM Awards® in April 2018.

Aside from her many creative talents, Reba is an entrepreneur. In 2005, Reba partnered with Dillard’s to launch her own successful lifestyle brand including clothing and footwear. Expanding on that brand, she most recently launched the REBA by Justin™ western footwear collection at select retailers nationwide for holiday 2017. In 2018, she was named the first female and musician to portray KFC’s iconic founder Colonel Harland Sanders in the brand’s celebrity colonel campaign. Watch the buzzed-about commercial here.

Like seemingly everything she touches, throughout 2018 the legendary entertainer will bring that same bubbly energy and penchant for excellence to the longest-running Country residency in The Colosseum’s history alongside her superstar pals for REBA, BROOKS & DUNN: Together In Vegas at Caesars.

With faith and family as Reba’s foundation, she has become a true multi-media mogul and earned the well-deserved title of the “Queen of Country Music.”