Phil Jackson is the NBA's career leader in playoff victories and playoff winning percentage, winning 11 NBA titles and surpassing Red Auerbach for the most all-time wins. Mr. Jackson did something that many coaches have struggled to do -- build a consistently winning team around a megastar. 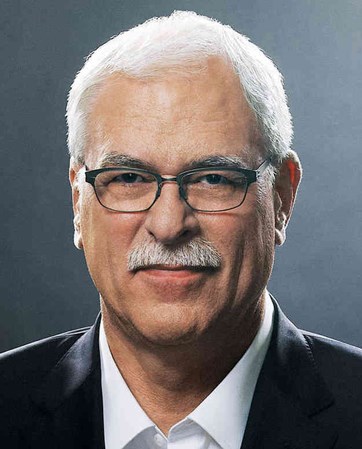 Please send me availability & fees for Phil Jackson
Thank you for your interest in this Harry Walker Agency speaker.
You will hear from one of our agents in the next 24 hours. If you have any other questions or information, please call us right away at 646.227.4900. Are you also interested in learning more about other speakers? Create a My Speaker List.
Virt. Panel - Mindfulness and Competitiveness | Wisdom 2.0 [2:05] - Get Sharable Link
https://www.harrywalker.com:443/speakers/phil-jackson/?videoid=43605
Virt. Panel - Mindfulness and Competitiveness | Wisdom 2.0 [2:05]

An Evening with Phil Jackson

Audiences are awed by Mr. Jackson's inspirational and unique perspective on greatness and winning. He is a motivator for all of us, providing examples of how to achieve and stay at the top of your field. ...

Audiences are awed by Mr. Jackson's inspirational and unique perspective on greatness and winning. He is a motivator for all of us, providing examples of how to achieve and stay at the top of your field.

The author of a championship legacy unmatched in the annals of pro basketball, Hall of Famer Phil Jackson was entrusted with the future of one of the game’s cornerstone franchises - and his original NBA home - when he was named president of the New York Knickerbockers on Mar. 18, 2014.

Jackson, the owner of a staggering 13 NBA Championship rings - two as a player with the Knicks, and a record-shattering 11 as head coach of the Bulls and Lakers - is currently in his second full season as president of the Knicks, marking his first front office leadership position and a return to the place where he first started writing NBA history nearly five decades ago.

“I’ve had a great feel for the process of free agency and the anticipation of how to build a team,” says Jackson, 70. “I think the orientation in the last year has been very good for me as far as dealing with agents, being with the people around the players, the players themselves, and the new kind of attempt to build teams in the NBA that’s kind of a new mode of operations.”

“We feel really good about our summer, how we approached the Draft and free agency,” adds Jackson. “What we’re happy about is that we have a group of guys who seem to want to work together, that seem to want to play together. We haven’t had to encourage guys to come work out at the training facility this summer, they seem to respond very well to working together and with each other. We feel like we have returning veterans who want to work and play and be together, we brought back guys who worked well in the system.”

Jackson, a member of the Naismith Memorial Basketball Hall of Fame’s Class of 2007, is in charge of all basketball decisions for the Knicks. He joined the Knicks following a 20-year head coaching career over which he amassed a 1,155-485 (.704) career regular season mark. His .704 career winning percentage is the highest for any head coach in League history (minimum 400 games), while his 1,155 regular season wins rank fifth on the all-time NBA list.

As part of the NBA’s Golden Anniversary celebration in 1996-97, Phil was named one of the 10 Greatest Coaches in NBA History. He earned NBA Coach of the Year honors in 1995-96 in the wake of Chicago’s record-breaking 72-10 season. Jackson is the all-time winningest coach in both Bulls (545) and Lakers (610) franchise history.

Decades before he recorded his first coaching win, Jackson’s NBA journey began with the Knicks, which made his return to the Big Apple all the more appropriate and symbolic.

“There’s a real decided feel about coming back to New York and the Knicks,” he says. “It’s the team I first started playing pro basketball with and had a successful career with a team that was highly successful under a coach who was a fan favorite and a team that was favored in the New York area.”

Originally drafted by the Knicks in the second round (17tth overall) of the 1967 NBA Draft, Jackson earned NBA All-Rookie Team honors in 1967-68 for a New York squad that featured two other rookies he would eventually join in Springfield - Walt Frazier and Bill Bradley. A coaching protégée of the late Red Holzman, Phil was sidelined for the entire 1969-70 championship season due to a back injury, but would play a key role on the 1972-73 championship squad with 8.1 ppg. The following season, 1973-74, he averaged a career-high 11.1 points while playing in all 82 games.

Jackson was a two-time All-American at the University of North Dakota under head coach Bill Fitch. Some four decades later, in 2008, he was presented with an honorary Doctorate of Letters by his alma mater.

Born on Sep. 17, 1945 in Deer Lodge, MT, Phil is the author of seven books, including his latest, Eleven Rings: The Soul of Success (Penguin, 2013). His first book, Take it All! (Macmillan, 1970), was a photographic look at the Knicks’ 1970 title drive co-authored with legendary Garden photographer George Kalinsky.

Jackson is the father of five grown children.