With a diverse and successful career in business and sports, Patrick Haden is a former Rhodes Scholar who quarterbacked two USC national championship teams in the 1970s and played for the L.A. Rams before careers as a sports broadcaster, attorney and businessman.

The Director of Athletics at his alma mater, the University of Southern California, from 2010-2016, Haden administered 19 athletic programs with over 600 student athletes. During his tenure, USC athletics won 9 NCAA National Championships and achieved unprecedented success.

A Quarterback in the 1970s, Haden was the USC Varsity Football Captain in 1975, and Co-Most Valuable Player of the 1975 Rose Bowl. Following his impressive college career, he went on to play in the NFL for the L.A. Rams, where in 1976 he was named the team's Rookie of the Year. After spending a few years as a sports broadcaster for CBS and NBC, he went on to join Riordan, Lewis & Haden, a private equity firm which invests in high growth middle market companies. He remained a partner at RLH until 2010. 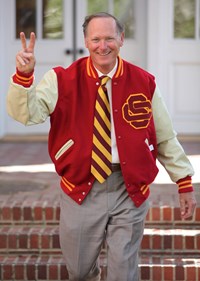 Please send me availability & fees for Patrick Haden
Thank you for your interest in this Harry Walker Agency speaker.
You will hear from one of our agents in the next 24 hours. If you have any other questions or information, please call us right away at 646.227.4900. Are you also interested in learning more about other speakers? Create a My Speaker List.
Patrick Haden Keynote- Conference on Business & Ethics - Get Sharable Link
https://www.harrywalker.com:443/speakers/patrick-haden/?videoid=25861
Patrick Haden Keynote- Conference on Business & Ethics

Patrick Haden is the former Director of Athletics at his alma mater, the University of Southern California, where he administered 19 athletic programs with over 600 student athletes. He also serves on the faculty of both the Annenberg School of Communications at USC and the Marshall School of Business. During his tenure, USC athletics won 9 NCAA National Championships and achieved unprecedented success.

He was a General Partner of Riordan, Lewis & Haden, a private equity firm which invests in high growth middle market companies, from 1987 until 2010.

Pat was quarterback for the USC football team from 1972-1974, leading them to two National Championships and three Rose Bowl appearances. He was captain his senior season. He was named Co-Most Valuable Player of the 1975 Rose Bowl. Pat was also named an Academic All-American in 1973 and 1974 and he is a member of the Academic All-American Hall of Fame, the Rose Bowl Hall of Fame, the National High School Hall of Fame and the USC Hall of Fame and he was awarded the NCAA’s Silver Anniversary Award. He played professional football for seven seasons, six of those with the Los Angeles Rams. He was named the Rams’ Rookie of the Year in 1976, was named to the Pro Bowl in 1977 and was named the National Football Conference Player of the Year in 1978 by the Washington, D.C. Touchdown Club.