Nicola Benedetti is one of the most sought-after violinists of her generation. Her ability to captivate audiences and her wide appeal as an advocate for classical music has made her one of the most influential artists of today.

Asides from extensive touring with the world’s most exceptional orchestras and ensembles, Nicola is one of the world’s leading advocates for quality music education, the role of arts and culture in the wider community and the transformational effect it has on all young people. She has formalised her vision and commitment to the education of young people and supporting of music teachers by establishing a charitable organisation: The Benedetti Foundation.

Winner of the GRAMMY Award for Best Classical Instrumental Solo in 2020, as well as Best Female Artist at both 2012 and 2013 Classical BRIT Awards, Nicola was appointed a CBE in 2019, awarded the Queen’s Medal for Music (2017), and an MBE in 2013. In addition, Nicola holds positions of Vice President (National Children’s Orchestras), Big Sister (Sistema Scotland), Patron (National Youth Orchestras of Scotland’s Junior Orchestra, Music in Secondary Schools Trust and Junior Conservatoire at the Royal Conservatoire of Scotland). Nicola is also the only instrumentalist to have performed twice at the Last Night of the Proms. 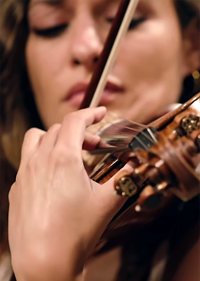 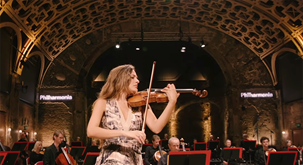 The Humility in Discipline

Prepare for the Stage: Mind, Body and Soul

Your Life is Your Education

Nicola Benedetti is one of the most sought-after violinists of her generation. Her ability to captivate audiences with her innate musicianship and spirited presence, coupled with her wide appeal as a high-profile advocate for classical music, has made her one of the most influential classical artists of today.

Born in Scotland of Italian heritage, Nicola began violin lessons at the age of five with Brenda Smith.  In 1997, she entered the Yehudi Menuhin School where she studied with Natasha Boyarskaya.  Upon leaving, she continued her studies with Maciej Rakowski and then Pavel Vernikov.

This season, Nicola will collaborate with the Orchestra of the Age of Enlightenment for live concerts at the BBC Proms, Snape Maltings and Saffron Hall, and with digital projects for the Philharmonia and Paavo Järvi and the Scottish Chamber Orchestra with Maxim Emelyanychev. Additionally, Nicola performs with the Lucerne Symphony Orchestra and James Gaffigan, the Spanish National Orchestra and the Pittsburgh Symphony with Pablo Heras-Casado. She is also Artist in Residence for the St Louis Symphony and will perform several concerts, recitals and masterclasses throughout the season. In Spring 2021 Nicola will give the world premiere of Mark Simpson’s Violin Concerto with the London Symphony Orchestra and Gianandrea Noseda, before the same work is performed with the RSNO and WDR Köln. Other season highlights include tours to the USA for chamber music projects including a baroque recital programme with Richard Egarr, a tour to the Far East with the Scottish Chamber Orchestra and Maxim Emelyanychev, and a recording and performances of Beethoven’s Violin Concerto with Aurora Orchestra.

Last season’s highlights include Nicola’s debut with the Wiener Symphoniker, a tour of Asia with the Deutsches Symphonie-Orchester Berlin and Robin Ticciati, plus returning performances with Vladimir Jurowski and the London Philharmonic Orchestra, Michael Tilson Thomas with both the New World Symphony and the London Symphony orchestras, City of Birmingham Symphony Orchestra, Scottish Chamber Orchestra and a European tour with Thomas Søndergård and the Royal Scottish National Orchestra.

Nicola has continued her role as a dedicated, passionate ambassador and leader in music education. Her commitment to supporting the UK’s music practitioners was underlined in July 2018, when Nicola took over as President of the European String Teachers’ Association. She has formalised her vision and expanded her commitment to the education of young people and supporting of music teachers by establishing a charitable organisation: The Benedetti Foundation.

Launched in January 2020, The Benedetti Foundation, puts on transformative orchestra-based workshops for young people and teachers, that showcase what music education at its best can look and feel like. Since its formation, the Foundation has delivered four sessions in the UK, working with children and teachers from 31 out of the 32 local authorities in Scotland, 30 out of London’s 32 boroughs, and in close partnership with many organisations, music services, hubs and private music teachers across the UK. In May 2020, during lockdown, the Foundation went online with a “virtual sessions” providing over 7,000 musicians of all ages and stages online tutorials and inspirational workshops. The impact of the sessions has been unprecedented with over 66 countries represented and sign-up from people in 41 of the 50 US States.

Winner of the GRAMMY Award for Best Classical Instrumental Solo in 2020, as well as Best Female Artist at both 2012 and 2013 Classical BRIT Awards, Nicola records exclusively for Decca (Universal Music). Her most recent recording of Elgar’s Violin Concerto entered at number one in the UK’s Official Classical Album Chart and received critical acclaim including a 5* review in The Times: “Yet beyond sheer agility, Benedetti offers listeners something even more valuable: a dynamic personal interpretation, refreshing and convincing.” Other recent recordings include her GRAMMY award-winning album written especially for her by jazz musician Wynton Marsalis: Violin Concerto in D and Fiddle Dance Suite for Solo Violin. Nicola’s recording catalogue also includes works from Shostakovich & Glazunov Violin Concertos to Szymanowski Concerto (London Symphony Orchestra/Daniel Harding) to Homecoming; A Scottish Fantasy, which made Nicola the first solo British violinist since the 1990s to enter the Top 20 of the Official UK Album Chart.

Nicola was appointed a Commander of the Order of the British Empire (CBE) in the 2019 New Year Honours list, awarded the Queen’s Medal for Music in 2017, the youngest ever recipient, and was appointed as a Member of the Most Excellent Order of the British Empire (MBE) in 2013 in recognition of her international music career and work with musical charities throughout the United Kingdom. In addition, Nicola has received nine honorary degrees to date.