Mike Eruzione led the 1980 United States Olympic Hockey Team to its Gold Medal victory in Lake Placid, NY. In the highlight of the game Mike scored the game-winning goal against the Soviet Union, a moment Sports Illustrated later voted their #1 Sports Moment of the Century. That victory against the Soviets advanced the U.S. Hockey Team to face and beat Finland for the Gold Medal.

For the past several years Mike has traveled throughout the country representing major corporations as their spokesperson and motivational speaker. Mike is currently employed by Boston University as Director of Special Outreach. He continues to be actively involved with fund raising events for the U.S. Olympic Committee as well as several charitable organizations including Winthrop Charities.

Play
Now
Virtual Discussion - The inside scoop on that legendary game from Mike Eruzione himself, and discuss his life after Olympic glory | Menopod [49:16]

Teamwork: How to Surmount Obstacles & Win

Expect Success But Never Be Complacent 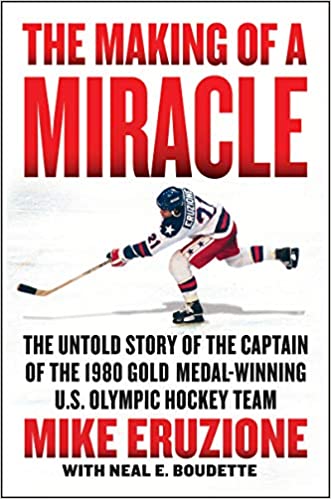 The Making of a Miracle: The Untold Story of the Captain of the 1980 Gold Medal–Winning U.S. Olympic Hockey Team - January 28, 2020

A native of Winthrop Massachusetts, Mike was a well-known sports talent; excelling as an All-Scholastic in baseball, football and hockey. While attending Boston University, Mike captained the hockey team his senior year and finished his college career as the third leading scorer in B.U. history. The years Mike played at B.U. his team won four Eastern Collegiate championships. Mike was voted the Best Defensive Forward in the Eastern Collegiate Conference and eventually was inducted into the Boston University Athletic Hall of Fame.

Mike played on two U.S. National Teams and played two years with the Toledo Goaldiggers of the International Hockey League. The IHL named Mike the McKenzie Award winner as the outstanding American born player in the IHL. The following year Mike was chosen to join the 1980 Olympic team. He was honored by being elected captain by his teammates.

After the victory in Lake Placid, Mike spent several years in New York and New Jersey as a sports commentator for Madison Square Garden. In 1984 Mike joined ABC and was a broadcaster for the Winter Olympics in Sarajevo, the Summer Olympics in Los Angeles and the 1988 Winter Olympics in Calgary. In 1992 Mike did broadcasting for CBS in Albertville, France and in Lillehammer, Norway during the 1994 Olympic Games.

The 1980 Olympic Team received many accolades after winning the Gold Medal, including being inducted into the United States Hockey Hall of Fame. In December 1999 Sports Illustrated voted the 1980 Team’s victory as the #1 Sports Moment of the Century. Mike and his teammates had the honor of lighting the Olympic Flame at the Opening Ceremonies of the 2002 Winter Olympic Games in Salt Lake City, Utah. In 2004 Mike and the 1980 Team were featured in the Disney movie “ Miracle “.

For the past several years Mike has traveled throughout the country representing major corporations as their spokesperson and / or motivational speaker. Mike is currently employed by Boston University as Director of Special Outreach. Mike resides in his hometown of Winthrop, MA, with his wife, three adult children and two grandchildren. He continues to be actively involved with fund raising events for the U.S. Olympic Committee as well as several charitable organizations including Winthrop Charities.