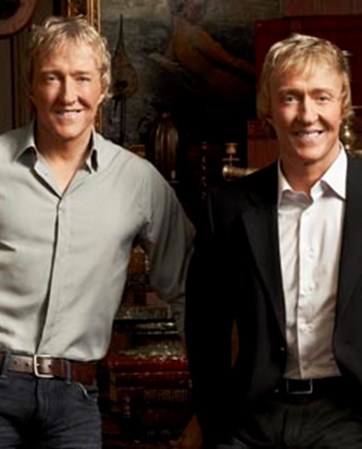 Please send me availability & fees for Leigh & Leslie Keno
Thank you for your interest in this Harry Walker Agency speaker.
You will hear from one of our agents in the next 24 hours. If you have any other questions or information, please call us right away at 646.227.4900. Are you also interested in learning more about other speakers? Create a My Speaker List.
Stories Behind Antiques - Get Sharable Link
https://www.harrywalker.com:443/speakers/leigh-leslie-keno/?videoid=11210
Stories Behind Antiques

In a country of junk-filled attics, yard sales, and flea markets frequented by millions of Antiques Roadshow viewers hoping to uncover a grungy chest of drawers worth millions, the Keno twins have become the Siskel and Ebert of antiques. Dapper, witty, and in their early forties (with nearly 60 year ...

In a country of junk-filled attics, yard sales, and flea markets frequented by millions of Antiques Roadshow viewers hoping to uncover a grungy chest of drawers worth millions, the Keno twins have become the Siskel and Ebert of antiques. Dapper, witty, and in their early forties (with nearly 60 years of combined experience between them), they symbolize the union of amateur enthusiasm and acute professionalism that has made their television program a cultural phenomenon. In a fascinating collection of tales of their personal adventures hunting -- and discovering -- priceless "junk" (including some notable Roadshow success stories), audiences will learn how to see the extraordinary in the mundane. "Hidden Treasures" is part history lesson and part treasure map for finding valuable antiques where they would be least expected.

Leigh Keno owns and operates Keno Auctions in New York City which had its premiere auction in May 2010. Prior to launching Keno Auctions, Leigh owned and operated Leigh Keno American Antiques where he sold an astounding variety of American furniture, folk art and paintings including
several masterpieces, often setting world record prices. Leigh is proud to have helped build some of the best private and institutional collections of Americana in the world. He has written articles for Art and Antiques, Antiques Magazine, and has co-authored two groundbreaking articles on Boston seating furniture for the Journal of American Furniture.

During his more than 34 years at Sotheby's, Leslie was directly responsible for numerous record-breaking sales of Americana, including the 2005 sale of the Nicholas Brown tea table attributed to John Goddard. The table achieved a spectacular $8.4 million (estimate $2,000,000-5,000,000), a new auction record for any table and the second-highest price for American furniture. He has been published in the American Ceramic Circle and has contributed to the Sotheby's Guide to American Furniture and Sotheby's Encyclopedia of Furniture.

The Keno brothers also authored Hidden Treasures: Searching for Masterpieces of American Furniture. Beginning in 2001, they wrote monthly furniture and design columns for House Beautiful and This Old House magazines and are often featured in Traditional Home magazine. In 2005, President George W. Bush awarded both Leigh and Leslie with the National Humanities Medal. In 2008, Leigh and Leslie accompanied First Lady Laura Bush on a History Channel televised tour of the White House, entitled: The White House: Behind Closed Doors. This was the first televised tour since Jacqueline Kennedy’s in 1962. Leigh and Leslie filmed a video with the History Channel at Mount Vernon for the exhibition Bringing Them Home: 150 Years of Restoring the Washington Collection. In fall 2011, Leigh and Leslie starred in Buried Treasure, a primetime reality show on FOX where the brothers visited people's homes to discover the true value and worth of their precious, and sometimes undiscovered, valuables, changing their lives for the better.

Leigh and Leslie enjoy spending time with their families, fly-fishing and racing vintage racecars. They also design their own contemporary home furnishings lifestyle brand, Keno Bros., produced by Theodore Alexander, and sold in over seventeen countries.

Leigh and Leslie were immersed in the world of Classic Cars starting from a very young age, as their father Ronald Keno is an aficionado of American, British and Italian motor cars. Their first purchase, at the age of sixteen, was a 1963 3.8 litre XK-E Jaguar Roadster, which they restored with their father and still own and drive today. They enjoy vintage racing with cars ranging from a 1959 Lotus Eleven Series II and a 1959 Lola Mk I with the VSCCA, to a 1980 Ferrari 512 BB/LM in the Historic Ferrari Challenge. The brothers are also highly active in the study, collection, exhibition and auction of Classic Cars in a variety of capacities. In November 2013 Leslie, who worked at Sotheby’s for 33 years before forming his own Art Advisory company, was senior specialist in the groundbreaking Sotheby’s/RM sale The Art of the Automobile and moderated the Symposium (which was attended by over 800 enthusiasts, the highest attendance for any symposium in Sotheby’s history). For the past decade, Leigh, a former Vice President at Christie’s, who is President of Keno Auctions in New York City, and Leslie have been honored to serve as judges in the prewar and post-war preservation classes at the Pebble Beach Concours d’Elegance. They lectured at the 2010 Connoisseurship and the Collectible Car Symposium at The Revs Institute for Automotive Research at the Collier Museum in Naples, Florida. Leslie was recently a speaker at the inaugural symposium in New York of the Bugatti Owners’ Club of America. The Kenos are passionate about raising public awareness regarding the importance of preserving original components of a car whenever possible. They view Historic Motor Cars as moving works of art, and often quote the well-known expression “a car can only be original once “ That said, similar to the rare furniture and works of art which they have evaluated and sold over their entire lives, they understand well that often times multiple prior restorations have been made before a collector or museum receives a car. Additionally, especially when a car is raced or rallied, safety must come first. In 1997 the Twins drove their family’s 1938 Jaguar 3 1/2 Liter SS-100 Roadster on the Louis Vuitton "China Run” which was an unforgettable 1000 Mile Rallyfrom Dalian, China to the Forbidden City in Beijing, with 49 other motor Cars enthusiasts from 16 countries.

In the fall of 2011, Leigh was invited by Fred Simeone to participate in a groundbreaking think tank at the Simeone Automotive Foundation, the purpose of which was to promulgate historic preservation standards for cars. The outcome resulted in the publication of the award-winning 2012 book, The Stewardship of Historically Important Automobiles, for which the Keno’s contributed a chapter. In 2013 Leslie participated in the inaugural Invitational Historic Vehicle Association (HVA) Summit where the first car in history was inducted into the National Historic Registry, an honor that had previously only been awarded to buildings and battleships. Leigh and Leslie moderated a panel discussion regarding preservation at the Inaugural 2014 Pebble Beach Classic Car Forum at the Pebble Beach Concours d’Elegance. They served as panelists at the groundbreaking Value in the Classic Car Market conference at the Tuck School Business at
Dartmouth College, organized by the Historic Automobile Group International (HAGI). In March 2015 Leigh and Leslie served as Judges at The Amelia Island Concours d’Elegance, and they are looking forward to being Honorary Chairmen for the Classic Car Club of America Museum's annual Experience,
June 5-7, and Co-Grand Marshalls of The Elegance at Hershey June 12-14, 2015.

Leigh and Leslie are Co-Managing Directors of the Historic Motor Car Investment Fund. Its objective of the Fund is to seek capital appreciation exclusively through the acquisition, conservation and/or restoration and eventual sale of classic and historic cars. The Fund focuses on acquiring the rarest and most desirable Classic Cars produced by marques such as Alfa Romeo, Aston Martin, Bugatti, Ferrari, Jaguar, Lamborghini, Maserati and Porsche. They feel that Classic Cars with the strongest upside potential are “blue-chip” Classic Cars with international cache produced during the 1950s and later ( however they are passionate about 1930’s Bugattis and Talbot Lagos as well). Particular emphasis will be paid to specific models of limited production built during the 1960s through the 1980’s in original condition that they feel believes are currently undervalued. They were thrilled when the Fund’s 1955 Ferrari 250 GT Europa won the Pre-1970 Preservation Award at the 2015 Cavallino Classic.