An entrepreneur who founded the successful cable TV franchise USA Networks, she is the author of, Bold Women, Big Ideas which she wrote to inform and inspire women entrepreneurs to create wealth through equity. In her speeches, Koplovitz she gives her expert advice on formulating a successful business plan or winning pitch and on sizing up today's investors. She uses examples of pioneering women entrepreneurs and provides inspiration and advice to anyone who wants to launch and finance a new business venture. The glossary and practical list of resources at the end of the book will help beginners get started learning about and finding venture capital. The book is written in a crisp, businesslike tone but with numerous glimmers of humor; current and wannabe entrepreneurs will gain information, understanding and appreciation of how business works in today's economy. The Art of Corporate Board Governance

Constructing an Effective Corporate Board

The Power of Ideas

Deconstructing the Process of Raising Capital 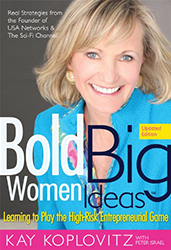 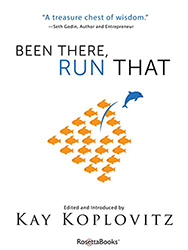 Been There, Run That

Kay Koplovitz is the Founder of USA Network and the visionary who created the business model for cable networks by introducing the concept of two revenue streams – licensing and advertising. When she founded USA Network under the banner of Madison Square Garden Sports in 1977 she was the first woman to head a television network.

As a visionary of what sports television would become, Ms. Koplovitz launched major professional and collegiate sports on cable television by negotiating the first contracts and creating first cable coverage for Major League Baseball, the National Basketball Association, the National Hockey League, the Masters from Augusta Georgia, the US Tennis Open and a collection of NCAA conference sporting events. She led USA Network to first place in cable prime time ratings and it remained there for 14 years. In 1992, she launched the Sci-Fi Channel (now The Syfy Channel) which has become a top ten rated cable network known for innovative drama and mini-series.In 1994, she launched USA Networks International, including what was then known as the Sci-Fi Channel into 60 countries worldwide.

In 1998, President Clinton appointed Kay Koplovitz to chair the bipartisan National Women’s Business Council. She used this platform to launch Springboard Enterprises, in a move to get women entrepreneurs to “think big” about their growth companies and to raise venture capital to fund them. Springboard Enterprises, her shared vision with co-founder Amy Millman, selects, trains and presents women-led companies to raise venture capital. Springboard is creating a national human capital network and has become the premier platform for women entrepreneurs, investors, and industry experts meet to build great women-led businesses. In 2001, Ms. Koplovitz co-founded Boldcap Ventures, a venture fund backed exclusively by high net worth women seeking to grow their portfolios with early stage investments. Boldcap invests principally in the media, technology, and healthcare sectors.

Kay Koplovitz, one of today’s leading women in business, is the author of Bold Women,Big Ideas (2002), which she wrote to inform and inspire women entrepreneurs to create wealth through equity. She is a sought after motivational speaker on subjects ranging from women’s leadership, women’s entrepreneurship, capital formation, creating a human capital ecosystem, to emerging media and management.

In February 2015, Ms. Koplovitz introduced and edited Been There, Run That, an anthology of best practices from Springboard entrepreneurs who have “been there, run that.”

An experienced public board member, Ms. Koplovitz is currently the on the Board of  CA Technologies, ION media and Time Inc. She has served on the boards of Instinet, Oracle, Nabisco, and General Re.