Judith Jamison - American dancer, Choreographer and Artistic Director of the Alvin Ailey American Dance Theater - is a legendary icon in the world of the performing arts. Ms. Jamison, who as a dancer with the troupe, became the most stellar of modern dance's female performers and was appointed Artistic Director of the Alvin Ailey American Dance Theater in December 1989 at the request of her mentor, Alvin Ailey, who personally chose her to succeed him. Ms. Jamison has shared her talent and artistic oversight at one of the most respected dance companies in the world for more than 50 years. Audiences respond to her passionate and electric remarks, and carry with them the truth of their own potential.

Please send me availability & fees for Judith Jamison
Thank you for your interest in this Harry Walker Agency speaker.
You will hear from one of our agents in the next 24 hours. If you have any other questions or information, please call us right away at 646.227.4900. Are you also interested in learning more about other speakers? Create a My Speaker List.
Rave Reviews About Judith Jamison
“
Judith Jamison made quite an impact on this community and also on specific students who benefited enormously from her message. A great visit. A lovely person.

An Inspiring Evening with Judith Jamison

Passion: The Key to Great Leadership 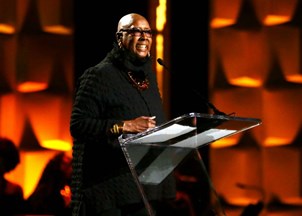 Judith Jamison is a living legend of the arts

When JUDITH JAMISON was handed the reigns of the legendary dance company by Alvin Ailey in 1989, who personally chose her to succeed him, she was given a company months away from bankruptcy. Under her tutelage, in the 21 years that followed, Jamison brought the company to unprecedented heights, including two historic engagements in South Africa and a 50-city global tour to celebrate the Company’s 50th anniversary. An icon of the arts, Jamison is the recipient of numerous awards and honors, among them an Emmy Award, an American Choreography Award, the Kennedy Center Honor, and a National Medal of Arts. She was also listed in TIME's 100 Most Influential People and honored by First Lady Michelle Obama at the first White House Dance Series event. Jamison continues to dedicate herself to promoting the arts, and shares with audiences her remarkable, empowering insights and anecdotes on overcoming adversity, leadership, and finding one's passion. She has addressed audiences nationwide, each time receiving rave reviews such as: "I just wanted to let you know that the day yesterday with Ms. Jamison was spectacular. She is such a light and the campus community had an incredible time with her." (Bucknell University). 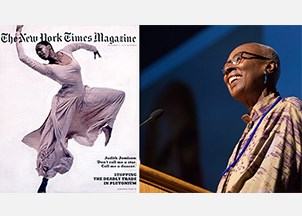 Artistic Director Emerita of Alvin Ailey JUDITH JAMISON is a consistently in-demand speaker for Black History Month, as he shares stories from her remarkable life and lessons on the role of the arts in American culture for enraptured audiences. An icon of modern dance, a civil rights trailblazer, and a passionate advocate for promoting inclusivity through the arts, Jamison has received the National Medal of Arts, The Congressional Black Caucus' Phoenix Award, an Emmy Award, and been invited to the White House by First Lady Michelle Obama, among her many other accomplishments. Her optimistic and empowering remarks leave audiences spellbound, and have even generated praise on Instagram such as: “It was such a pleasure to learn from and share space with the legendary, Judith Jamison tonight. Hearing her speak gave me a timely reminder that there are miracles happening around us every day, and that we just have to stop and pay attention to them.” Jamison receives similar effusive praise at each of her events. When she recently spoke at two college campuses, she received the following rave reviews:  "Mrs. Jamison was a most gracious and eloquent speaker. The fervor in which she spoke on the role of the arts in our lives moved the audience to gasp, then cheer. What a pleasure to host such a guest whose caliber is unparalleled. She brought such a warmth, honesty and lively spirit to our campus." (University of Utah); "Everything was wonderful…I have had students and faculty approach me all week long saying they were inspired by Ms. Jamison's speech. I was really nice to have someone to speak on diversity and growth in the arts." (Hamilton College)

Judith Jamison joined Alvin Ailey American Dance Theater in 1965 and quickly became an international star. Over the next 15 years, Mr. Ailey created some of his most enduring roles for her, most notably the tour-de-force solo Cry. During the 1970s and 80s, she appeared as a guest artist with ballet companies all over the world, starred in the hit Broadway musical Sophisticated Ladies, and formed her own company, The Jamison Project. She returned to Alvin Ailey American Dance Theater in 1989 when Mr. Ailey asked her to succeed him as Artistic Director. In the 21 years that followed, she brought the Company to unprecedented heights – including two historic engagements in South Africa and a 50-city global tour to celebrate the Company’s 50th anniversary. Ms. Jamison is the recipient of numerous awards and honors, among them a prime time Emmy Award, an American Choreography Award, the Kennedy Center Honor, a National Medal of Arts, a “Bessie” Award, the Phoenix Award, and the Handel Medallion. She was also listed in “TIME 100: The World’s Most Influential People” and honored by First Lady Michelle Obama at the first White House Dance Series event. Last year, she became the 50th inductee into the Hall of Fame at the National Museum of Dance.

As a highly regarded choreographer, Ms. Jamison has created many celebrated works, including Divining (1984), Forgotten Time (1989), Hymn (1993), HERE . . .NOW. (commissioned for the 2002 Cultural Olympiad), Love Stories (with additional choreography by Robert Battle and Rennie Harris, 2004), and Among Us (Private Spaces: Public Places) (2009). Ms. Jamison’s autobiography, Dancing Spirit, was edited by Jacqueline Kennedy Onassis and published in 1993. In 2004, under Ms. Jamison’s artistic directorship, her idea of a permanent home for the Ailey company was realized and named after beloved chairman Joan Weill. Ms. Jamison continues to dedicate herself to asserting the prominence of the arts in our culture, and she remains committed to promoting the significance of the Ailey legacy—using dance as a medium for honoring the past, celebrating the present and fearlessly reaching into the future.