Former President of the European Central Bank (2003-11) and Chairman of the Bank of France (1993-2003) Jean-Claude Trichet is a global authority on financial markets and the economy. While at the helm of the European Central Bank, Trichet oversaw the Eurozone's handling of the Great Recession and European Debt Crisis in the aftermath of the 2008 financial collapse. Currently the Chairperson of the Board at Bruegel-- a leading European think tank focused on economic policy-- Chairman of the Group of Thirty, and European Chairman of the Trilateral Commission, Trichet offers razor shop analysis on risks and opportunities facing the global economy.

Trichet has been named to the Financial Time's “Person of the Year” and “Fifty Faces that Shaped the Decade,” as well as listed on International Economy magazine's “Policy Maker of the Year,” Newsweek's “World’s Most Powerful” and TIME's “Most Influential People in the World.”

Please send me availability & fees for Jean-Claude Trichet
Thank you for your interest in this Harry Walker Agency speaker.
You will hear from one of our agents in the next 24 hours. If you have any other questions or information, please call us right away at 646.227.4900. Are you also interested in learning more about other speakers? Create a My Speaker List.
Rave Reviews About Jean-Claude Trichet
“
The event was great success. We are all so grateful to have had Mr. Trichet in our International Seminar... Thank you so much!

Play
Now
Keynote - Of Growth and the Euro: Is the Euroboom Finally Here? | Chicago Council on Global Affairs [full+qa 1:05:25]

The Global Economic Outlook According to the Former President of the European Central Bank, Jean-Claude Trichet

As former President of the European Central Bank during turbulent economic times, Jean-Claude Trichet has a unique point-of-view on the economic legacy of the measures adopted by central banks during the global economic crises of the last decade. Mr. Trichet clarifies the world financial outlook, gi ...

As former President of the European Central Bank during turbulent economic times, Jean-Claude Trichet has a unique point-of-view on the economic legacy of the measures adopted by central banks during the global economic crises of the last decade. Mr. Trichet clarifies the world financial outlook, giving his audiences the keys to understand what is needed to contain risks and pave the way for sustainable growth. Mr. Trichet currently serves as Chair of the G30 and Chairman of the Board of Bruegel, a European economic think tank. 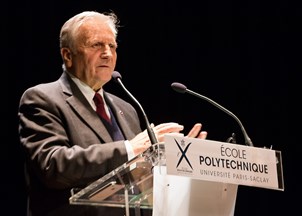 Former President of the European Central Bank (2003-11), Chairman of the Bank of France (1993-2003) and currently at the helm of European economic policy think-tank Bruegel, Jean-Claude Trichet is a go-to voice on financial markets and the global economy. Named to the Financial Time's “Person of the Year” and “Fifty Faces that Shaped the Decade,” Trichet has also been listed on International Economy magazine's “Policy Maker of the Year,” Newsweek's “World’s Most Powerful” and TIME's “Most Influential People in the World.” As former President of the European Central Bank during turbulent economic times, Trichet offers unparalleled insights into what is needed to contain risks and pave the way for sustainable growth. Recently Trichet addressed a rapt audience on the Eurozone at the Oxford Union. Regularly sought-out for his policy insights, Trichet delivered an in-depth interview on the outlook for ECB monetary policy amid the threat of a possible European and global recession for Bloomberg, and on Brexit for CNBC. Able to balance macro insights with tangible takeaways, Trichet regularly receives rave reviews from audiences such as: "The event was great success. We are all so grateful to have had Mr. Trichet in our International Seminar..." (Indonesia Deposit Insurance Corporation) 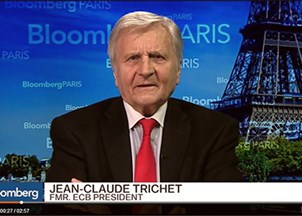 Jean-Claude Trichet in the News

JEAN-CLAUDE TRICHET was president of the European Central Bank, Chairman of the Bank of France and is Chairman of the influential Group of 30 (G30). Here is a sampling of his media appearances:

Jean-Claude Trichet is presently honorary chairman of the Group of Thirty (Washington), chairman of the Board of Directors of Bruegel Institute and a member of the « Institut de France » (Académie des Sciences Morales et Politiques). He also chairs the Trilateral Commission for Europe.

Jean-Claude Trichet worked in the competitive sector from 1966 to 1968. He was appointed to the Inspection générale des Finances in 1971.He was assigned to various posts at the Ministry of Finance in the General Inspectorate of Finance and later in the Treasury Department, where in 1976 he became Secretary General of the Interministerial Committee for Improving Industrial Structures (CIASI).

Jean-Claude Trichet was made an adviser to the cabinet of the Minister of Economic Affairs in 1978, and then an adviser to the President of the Republic in the same year. In this capacity, he worked on issues relating to energy, industry, research and microeconomics from 1978 to 1981. He subsequently became Deputy Director of Bilateral Affairs at the Treasury Department from 1981 to 1984 and Head of International Affairs, also at the Treasury, and was Chairman of the Paris Club (sovereign debt rescheduling) from 1985 to 1993. In 1986 he directed the Private Office of the Minister of Economic Affairs, Finance and Privatisation.

He was instrumental in the implementation of the French strategy of “competitive desinflation” in the 80’s and the 90’s, as Director of the Treasury and Governor of the Banque de France. He has launched the idea of the “Principles for stable capital flows and fair debt restructuring” in the international debt strategy at the end of the 90’s.

He was appointed President of the European Central Bank on 16 October 2003 by common accord of the Governments of the Member States that have adopted the euro at the level of Heads of State or Government for a term of office of eight years starting on 1 November 2003 and ending 31 October 2011. Since late 2010 and until end of October 2011, Mr Trichet has also been Chairman of the European Systemic Risk Board (ESRB). In 2021, the IFRS Foundation created a new Eminent Person Group, chaired by Trichet. The purpose is to provide advice to the Trustees in their sustainability-related work.

Jean-Claude Trichet was named “Person of the Year” by the Financial Times in 2007 and was one of the “Fifty faces that shaped the decade” of the Financial Times in December 2009  He was named twice “Policy maker of the year” by “the International Economy Magazine” (1991 and 2007). He was n° 5 of the “World most powerful” in Newsweek list and of the “Most powerful figures in finance” of Institutional Investor (2008). He was also one of the “Most influential people in the world” in Time Magazine (2011).

He has received a number of awards, including the “Zerilli Marimo” prize from the Académie des Sciences morales et politiques (1999), the international “Pico della Mirandola” prize (2002), the “Prix franco-allemand de la Culture/Deutsch-Französischer Kulturpreis” (2006) and the “Ludwig Erhard Memorial Coin in Gold” (2007). He was also named “Central Banker of the Year” by The Banker (2008), “European Banker of the Year 2007” by The Group of 20 + 1 (2008), and “Central Bank Governor of the Year 2008” by Euromoney. He was awarded the 2011 International Charlemagne Prize of Aachen for his contribution to European unity and also received the 2011 Global Economy Prize from the Kiel Institute for the World Economy. He received the “Collier du mérite européen” in Luxemburg (2013) , the National Association of Business Economists (NABE) “Lifetime Achievement Award for Economic Policy” - Washington (2014) and the Prize for outstanding achievements of the "Monetärer Workshop", Francfort ( 2016 ).

Born in Lyon, Jean-Claude Trichet is an honorary Inspecteur général des Finances and Ingénieur civil des Mines. He is a graduate of the Ecole nationale supérieure des Mines de Nancy, of the Institut d’études politiques de Paris, of the Université de Paris (in economics) and of the Ecole nationale d’administration. He has been awarded honorary doctorates by the universities of Liège, Stirling, Montréal, Tel Aviv, Bologne and Sofia.