Time Magazine called Gloria Allred "one of the nation's most effective advocates of family rights and feminist causes." An active feminist, Gloria Allred founded and is currently serving as President of the Women's Equal Rights Legal Defense and Education Fund (WERLDEF). Among her countless honors for her pioneering legal work on behalf of women's rights and rights for minorities, Gloria was inducted into the National Women's Hall of Fame to be stand among other notable stallwarts in the movement. Articles by or about Ms. Allred have appeared in publications such as Time Magazine, The New York Times, Ms. Magazine, The American Lawyer, The Daily News, The Wall Street Journal, The Los Angeles Times, and The London Times.

Please send me availability & fees for Gloria Allred
Thank you for your interest in this Harry Walker Agency speaker.
You will hear from one of our agents in the next 24 hours. If you have any other questions or information, please call us right away at 646.227.4900. Are you also interested in learning more about other speakers? Create a My Speaker List.
Rave Reviews About Gloria Allred
“
She is a powerful speaker, exactly what we were looking for; we were absolutely thrilled to have Gloria!!! She spoke very passionately and the women really responded. Gloria Allred was also a very lovely person, in addition to being a wonderful speaker, which is always a bonus!!!  I would recommend any Jewish community using her for any of their women’s programs.

Play
Now
Fighting for the Power of Choice 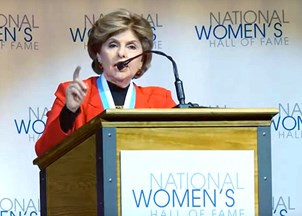 Gloria Allred inducted into the National Women's Hall of Fame

The National Women’s Hall of Fame is located in Seneca Falls, New York, where the women’s movement was founded in 1848. It was there that women first organized to demand suffrage, the right to vote for women, and the addition of the 19th amendment to the United States Constitution which mandated that women have the right to vote. Next year marks the 100th anniversary of the passage of the 19th amendment. Fight Back and Win : My Thirty-Year Fight Against Injustice--And How You Can Win Your Own Battles

"I start every day with the knowledge that helping people and fighting for justice is my duty, and that nothing worthwhile comes without sacrifice, self-discipline, and courage." -Gloria Allred, Fight Back and Win

Ms. Allred is a founding partner of the law firm of  Allred, Maroko & Goldberg (AM&G) with offices in Los Angeles and New York. Her firm handles more women’s rights cases than any other private law firm in the nation and has won hundreds of millions of dollars for victims.  Over the course of her 43 year legal career, Gloria Allred has won countless honors for her pioneering legal work on behalf of women's rights and rights for minorities. AM&G represents victims who have been discriminated against on account of their sex, race, age, physical handicap or sexual orientation. Her firm also represents victims of AIDS discrimination; sexual harassment and wrongful termination. AM&G is also well-known for its work on behalf of victims in civil rights, rape, child sexual abuse and battered women cases. Ms. Allred also founded and is currently serving as President of the Women’s Equal Rights Legal Defense and Education Fund (WERLDEF).

Ms. Allred has won the President’s award from the National Association of Women Lawyers and the President's Award for Outstanding Volunteerism, presented to her in 1986 by President Ronald Reagan at the White House. She has been voted by her peers as one of the best lawyers in America. Gloria is also a three-time Emmy nominee for her commentaries on KABC television in Los Angeles.  Her nationally syndicated television show “We the People, with Gloria Allred” was also nominated in 2012 for a Daytime Emmy Award.

Ms. Allred was elected for inclusion in Southern California SuperLawyers listings from 2004 to 2018 by Law and Media and Los Angeles Magazine and she has been selected for inclusion in the 2011-2018 editions of “Best Lawyers in America”.  In January 2014 Gloria received the Lifetime Achievement Award from The National Trial Lawyers for her trailblazing and pioneering role in combating injustices and winning new rights especially for women and minorities.  She was honored at the 2016 International Women’s Forum (IWF) World

Leadership Conference with the 2016 IWF Women Who Make a Difference Award.  In July 2018 she was given a Lifetime Achievement Award by the National Organization for Women (NOW) for her enduring commitment to fighting injustices against women. President Obama has introduced Ms. Allred as “one of the best attorneys in the country”.

In 2017 Netflix announced “Seeing Allred” an original documentary about Ms. Allred and her battles for justice which launched globally on Netflix in February 2018 after its world premiere in the U.S. Documentary Competition at the 2018 Sundance Film Festival.  In February 2018, Ms. Allred received the Lenore Kramer Award for Excellence from the Women’s Caucus of the New York State Trial Lawyers Association.

Most recently, Ms. Allred has been honored to be selected for induction into the National Women’s Hall of Fame. The induction ceremony will take place in September, 2019 in Seneca Falls, New York. Ms. Allred will be inducted with U.S. Supreme Court Justice Sonia Sotomayor and Jane Fonda.

Ms. Allred is also the author of Fight Back and Win, My Thirty-Year Fight Against Injustice - And How You Can Win Your Own Battles.