U.S. Navy Commander Frank Weisser is a two-time Blue Angels Pilot who was deployed in combat three separate times, including to Afghanistan and Iraq. He flew in the front seat as pilot for some of Top Gun: Maverick’s most memorable scenes, including the one in which Tom Cruise blisters through a twisting canyon uncomfortably close to rocky cliffs and the ground at lightning speeds. By completing that canyon course in 2:15 in the movie, Cruise was able to show his Navy bosses that, in fact, the combat mission his pilots were tasked with could be completed. Cruise looks like he is flying the jet; in reality, it was Weisser. Read more in Forbes' "U.S. Navy CDR Frank Weisser, ‘Top Gun: Maverick’s’ Secret Weapon" >>

A native of Atlanta, Ga., Weisser joined the Blue Angels in September 2007. He has accumulated more than 5,000 flight hours and nearly 500 carrier arrested landings. He earned a masters degree in Systems Analysis from the Naval Postgraduate School in September 2009. His decorations include multiple Meritorious Service Medals, Strike Flight Air Medals and various personal and unit awards. He is type rated in the Gulfstream 450/550 and is the developer and manager of a private airpark in the North Georgia Mountains. 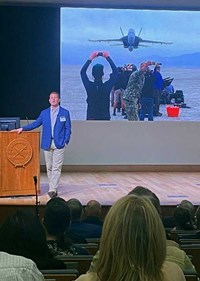 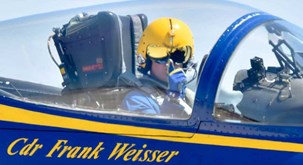 Please send me availability & fees for Frank Weisser
Thank you for your interest in this Harry Walker Agency speaker.
You will hear from one of our agents in the next 24 hours. If you have any other questions or information, please call us right away at 646.227.4900. Are you also interested in learning more about other speakers? Create a My Speaker List.
Rave Reviews About Frank Weisser
“
Frank totally nailed it. He was humble, genuine, and his message was powerful and enduring.

Commander Frank J. Weisser is a native of Atlanta, Georgia and graduated from North Springs High School in 1996 where he lettered in football and track. He attended the United States Naval Academy, earning a Bachelor of Science degree in Mathematics in 2000, and was commissioned as an Ensign in the U.S. Navy.

Frank reported to Naval Air Station (NAS) Pensacola, Florida for aviation indoctrination in October 2000. He completed flight training and received his wings of gold in November 2002 and remained with Training Squadron 7 (VT-7) as an Instructor Pilot in the T-45C as a Selectively Retained Graduate (SERGRAD).

Frank reported to Strike Fighter Squadron 87 (VFA-87), the "War Party," in April 2005 where he deployed aboard the USS Theodore Roosevelt (CVN 71) in August 2005. During this deployment, Frank flew 34 combat missions over Iraq in support of Operation Iraqi Freedom.

Frank returned to the fleet as a Department Head for Strike Fighter Squadron 97 (VFA-97), the "Warhawks," at NAS Lemoore, California. While assigned to VFA-97, Frank flew 37 combat missions over the course of two deployments to the Western Pacific/Arabian Gulf aboard USS John C. Stennis (CVN 74) in support of Operations New Dawn and Enduring Freedom.

Following his Department Head tour, Frank reported to the NATO School in Oberammergau, Germany in December 2013. While assigned to the NATO School, Frank was the Director of Mobile Training and Education and oversaw all NATO School training activities throughout the world, while personally conducting training in Ethiopia, Ukraine, Germany and France.

Frank rejoined the Blue Angels in July of 2016 where he served again as the Opposing Solo Pilot and Lead Solo Pilot. Following the completion of the 2017 season, Frank remained in Pensacola to assist the Naval Aviation Enterprise with the Transition from the Legacy F/A-18 to the F/A-18 E/F Super Hornet where he oversaw maneuver testing and implementation to ensure a successful first air show season flying the Super Hornet in 2021. During this time, Frank was selected to be the pilot for all extreme low altitude and inverted scenes for the Top Gun 2: Maverick major motion picture film.

On the civilian aviation side, Frank is a type-rated PIC in the Gulfstream 450/550/V and owns and operates a 58 Baron. In addition, Frank is the airport manager for Heaven’s Landing Airpark (GE99), a private fly-in neighborhood in the North Georgia mountains.