One of the most recognized and respected sports broadcasters in the industry, Erin Andrews is part of FOX Sports A Team, reporting for FOX NFL Sunday.

Andrews recently added “creator” to her long list of titles with the launch of her new women's NFL apparel line, WEAR by Erin Andrews. The fashionable, comfortable and subtle line, designed for women to wear anywhere and everywhere, has quickly garnered notable attention - becoming the #1 NFL women’s-only brand since it launched. She is the recipient of the coveted Pat Summerall Award, which celebrates her outstanding work as a sportscaster and contributions to the community, and made history as the first woman to receive this award. Last year, Andrews was honored with a Gracie Award. Andrews co-hosts a podcast with Charissa Thompson called Calm Down with Erin and Charissa for iHeartRadio. The podcast consists of unfiltered conversations between two girlfriends about life, gossip, sports and pretty much every random topic that needs to be dissected.

While at the top of her career with no limits in sight, Andrews was shocked when she was diagnosed with cervical cancer following a routine annual checkup. Not wanting the diagnosis to interfere with the career she had fought so hard for, Andrews quietly planned doctors’ visits around her work schedule in order to keep her diagnosis private and kept moving full speed ahead during treatment, only sharing her story publicly after she received word she was cancer free.

In empowering, insightful conversations, Andrews discusses her storied career and what it took to get to the top of her game, the challenges and triumphs of working in a male-dominated industry, and spreading awareness about cervical cancer prevention.

Please send me availability & fees for Erin Andrews
Thank you for your interest in this Harry Walker Agency speaker.
You will hear from one of our agents in the next 24 hours. If you have any other questions or information, please call us right away at 646.227.4900. Are you also interested in learning more about other speakers? Create a My Speaker List.
Rave Reviews About Erin Andrews
“
Erin was amazing! She was down to earth and so easy to work with! She clearly did her research and prepared for the evening which in turn provided us with a first class production!! We had the largest crowd in history of the event (12 years) … we blew our financial goal out of the water and Erin won the hearts of every person in the room!

Erin Andrews is a Leader in Women’s Athletic Apparel. She Talks Finding Success by Blending Business, Personal Brand, and Passion.

ERIN ANDREWS is known across the country for her prolific and respected sportscasting career with Fox Sports, but she is also an extremely savvy businessperson. Spotting a gap in the women’s fan apparel market, she launched a women’s National Football League apparel line, WEAR by Erin Andrews. The line quickly become a hit with fans, earning its spot as #1 bestselling NFL women’s clothing brand. Andrews capitalized on the brand’s success expanding into the National Basketball League and the National Collegiate Athletic Association, with an expansion into the National Hockey League on the way. Her success has come from using her knowledge to find the gaps in the market and marketing to her audience, two topics that she discusses as a business speaker at engagements.

Her visionary business leadership has been applauded and profiled in Forbes, Entrepreneur, and Women’s Wear Daily. “Erin identified fashion in some unique looks that she didn’t feel were being serviced in our industry today,” said Jack Boyle, global co-president of Fanatics, the largest retailer of licensed sports merchandise in the world.

Andrews is also an advocate for women in sports and cervical cancer awareness, as a survivor herself. She has overcome the obstacles in her path to be a true success story and an inspiration to millions. She is eager to motivate and inspire your audience with insights from her life as a leading sportscaster and businessperson. Inviting Erin would be a touchdown for your organization. 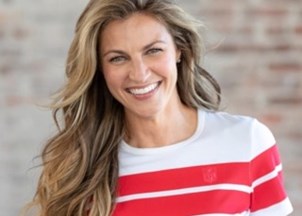 Erin Andrews delivers the substance and star power you need to make your event shine. She is a perfect choice for empowering conversations - or as an emcee, moderator or host for your fundraiser or large event.

When FOX sports broadcaster ERIN ANDREWS "stopped by" HWA the other day for a virtual meet and greet, we all left the call feeling more energized and hopeful than before, inspired by her resilience in the face of several personal obstacles, and impressed by her passion, clarity of vision and her gravitas. She engaged us with her storytelling on a wide range of topics from sports headlines, to being passionate about work, to her entrepreneurial ventures.

Poignantly, she shared her journey overcoming cervical cancer and the importance of using her voice to advocate for testing and support for cancer patients. Seeing a need and an opportunity, she created her new women’s NFL apparel line, WEAR by Erin Andrews which is #1 in the category and loved female fans, which make up 50% of the NFL's fan base, by the way. Erin commands any crowd- live or virtual- for lively, empowering, and insightful conversations. And you know from her sideline reporting that she is an excellent interviewer and moderator who is quick on her feet and a pro's pro. She was the first woman to receive the Pat Summerall Award, which is given each year to a notable NFL broadcaster, and in 2021, won a Gracie Award from the Women in Media Foundation for Sports On-Air Talent. Securing Erin for your event is a big win all around.

Recently, Andrews became the first female recipient to be honored with the prestigious Pat Summerall Award to recognize her career and impact she has made in her community. Erin has also been named the recipient of Vince Lombardi’s Award of Excellence which recognizes individuals who capture the spirit of commitment and pursuit of excellence. Last year, Andrews was honored with a Gracie Award.

Last year, Andrews launched a podcast that she co-hosts with Charissa Thompson called Calm Down with Erin and Charissa for iHeartRadio. The podcast consists of unfiltered conversations between two girlfriends about life, gossip, sports and pretty much every random topic that needs to be dissected.

Andrews’ recently added “creator” to her long list of titles with the launch of her women’s NFL apparel line, WEAR by Erin Andrews. The fashionable, comfortable and subtle line, designed for women to wear anywhere and everywhere, has quickly garnered notable attention- becoming one of the top  NFL women’s only brand since it launched in October 2019. Due to overwhelming demand, WEAR has expanded to the NBA, NCAA and NHL.

In addition to being a trailblazer in the sports world, Andrews also made a name for herself in entertainment as she co-hosted ABC’s long-running reality series, Dancing with the Stars, alongside Tom Bergeron for 11 seasons. Having a unique perspective on the competition, Erin was also a contestant in 2010, where she was paired with Maksim Chmerkovkiy and earned third place.

Recent notable appearances include her coverage of Super Bowl LIV, Super Bowl LI, Super Bowl XLVIII, the 2021 NFC Championship Game, the 2015 & 2014 World Series, the 2015 & 2014 MLB All Star Games and hosting FOX’s Prime Time College Football Pregame Show. Prior to her move to FOX, Andrews spent eight years at ESPN where she hosted the first hour of ESPN’s College GameDay on ESPNU and was a features reporter for the full three-hour program, congruently serving as a sideline reporter for NCAA football and basketball games.

Erin began her career with Fox Sports-Florida South as a freelance reporter and Tampa Bay Lightning reporter for the Sunshine Network. She joined ESPN in May 2004 as a reporter for the network’s National Hockey League coverage and quickly become a fan favorite, transitioning into college football and basketball.