An expert on U.S. foreign policy around the globe and a top White House adviser on Middle Eastern issues, Elliott Abrams has served in major foreign policy positions for three Republican U.S. Presidents, George W. Bush, Ronald Reagan, and Donald Trump. He is a Senior Fellow for Middle Eastern Studies at the Council on Foreign Relations in Washington, D.C.

Please send me availability & fees for Elliott Abrams
Thank you for your interest in this Harry Walker Agency speaker.
You will hear from one of our agents in the next 24 hours. If you have any other questions or information, please call us right away at 646.227.4900. Are you also interested in learning more about other speakers? Create a My Speaker List.
Rave Reviews About Elliott Abrams
“
Elliott Abrams was an outstanding speaker and a gracious gentleman … We had an audience of about 200, with about 45 minutes of very engaging q&a, with most queries about Israel and the Middle East. Elliott stayed for our post-talk reception and again spoke to a number of attendees before he left. As a speaker, he was exceptionally knowledgeable, informative , intelligent and patient. We were greatly pleased with his visit.

Play
Now
Virtual Discussion - The democratic Transition Framework and The Future of Venezuela | The Hudson Institute [41:40]

Play
Now
In Conversation - Identity, Values and the Conduct of US Foreign Policy | UCTV [59:12]

Elliott Abrams has served three Republican presidents in various critical national security and policy roles including, most recently, United States Special Representative to Iran and Venezuela. In this speech, Abrams discusses the critical issues shaping U.S. foreign policy in these regions, including energy security, sanctions, and the risks of volatility.

The U.S. faces many adversaries in the Middle East and in the Islamic world, among them terrorist groups who have access to modern military technology, including WMDs and the means to deliver them. From the conflicts in Gaza to Iran’s nuclear program to the war in Syria, this region remains a source ...

The U.S. faces many adversaries in the Middle East and in the Islamic world, among them terrorist groups who have access to modern military technology, including WMDs and the means to deliver them. From the conflicts in Gaza to Iran’s nuclear program to the war in Syria, this region remains a source of instability and danger. Mr. Abrams offers a timely and important contribution to the discussion of U.S. foreign policy and the directions that must be taken to keep America safe.  He draws upon an acute understanding of American history and his own senior-level experience making foreign policy in the Reagan and Bush (43) administrations.

Inside the Middle East

Drawing on his years as a top White House adviser on Middle Eastern issues, Mr. Abrams blends historical context with keen insight to address the most up-to-date developments in this troubled region. His thoughtful analysis of the obstacles ahead will leave audiences with an insider's perspective on ...

Drawing on his years as a top White House adviser on Middle Eastern issues, Mr. Abrams blends historical context with keen insight to address the most up-to-date developments in this troubled region. His thoughtful analysis of the obstacles ahead will leave audiences with an insider's perspective on the conflicts and prospects for peace. 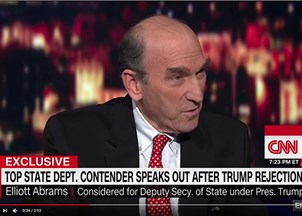 Elliott Abrams in the news 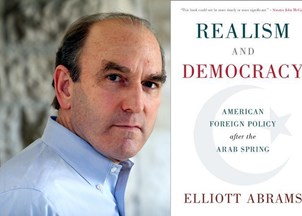 Renowned foreign affairs expert ELLIOTT ABRAMS has released a critically acclaimed new book, Realism and Democracy: American Foreign Policy after the Arab Spring. Drawing on four decades of experience as an American official and Middle East expert, Abrams takes us inside his work with leaders like Scoop Jackson, Pat Moynihan, George Shultz and Ronald Regan, to reveal a personal story of the development of U.S. human rights policy. With careful, sharp analysis of America’s record in the Middle East and beyond, Realism and Democracy presents an argument, both “realist” and principled, for supporting the expansion of democracy in the Middle East. Praise for the book has poured in from America’s most trusted foreign policy experts: “Elliott Abrams has done the country another important service. This outstanding book reminds us that the enduring power of America is that, at our best, we see our interests as our values, and our values as our interests. Now more than ever, Americans and their leaders need to understand that support for human rights has been, and should remain, a key pillar of U.S. foreign policy. This book could not be more timely or more significant” (Senator John McCain); “Elliott Abrams gives us a brilliant review of the fight for freedom, showing with clarity what works and what does not. But even more, he highlights the possibilities for progress that may be gained from a determined, long-term strategy advocating democracy and human rights” (The Honorable George P. Shultz). Delivering remarks on the book at Georgetown University’s Andrew H. Siegel Memorial Lecture, The Alexander Hamilton Society, and Freedom House, Abrams brings his tremendous breadth of experience and powerful argument to life for any audience. 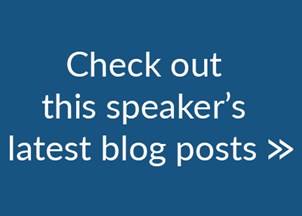 Blog on Council on Foreign Relations

Elliott Abrams gives his take on U.S. foreign policy, with special focus on the Middle East and democracy and human rights issues. 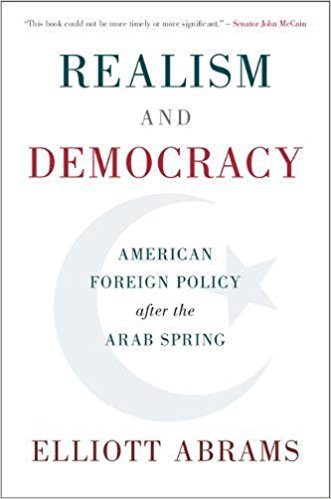 Realism and Democracy: American Foreign Policy after the Arab Spring Tested by Zion: The Bush Administration and the Israeli-Palestinian Conflict

Oil Companies, Aid Groups Plan to Press Biden to Allow Venezuela Fuel Swaps - US News & World Report
Briefing With Special Representative for Iran and Venezuela Elliott Abrams On Developments in Iran and Venezuela - US Embassy in Georgia
Elliott Abrams: ‘There is no reason to make all sorts of concessions to Iran’ - Jewish News Syndicate
Trump's Iran czar: Talks with Tehran inevitable whoever is president - The Jerusalem Post
Former U.S. diplomat Abrams to lead efforts on Venezuela - Reuters
The Fog of Cease-fire: Who Won the Gaza War? - The Weekly Standard
Aid to the Palestinians: Why Rand Paul is Wrong - Council on Foreign Relations Blog
Biography

Elliott Abrams is senior fellow for Middle Eastern studies at the Council on Foreign Relations (CFR) in Washington, DC. He served as deputy assistant to the president and deputy national security advisor in the administration of President George W. Bush, where he supervised U.S. policy in the Middle East for the White House, and as Special Representative for Iran and Venezuela in the administration of Donald Trump.

Abrams was educated at Harvard College, the London School of Economics, and Harvard Law School. After serving on the staffs of Senators Henry M. Jackson and Daniel P. Moynihan, he was an assistant secretary of state in the Reagan administration and received the secretary of state's Distinguished Service Award from Secretary George P. Shultz. In 2012, the Washington Institute for Near East Policy gave him its Scholar-Statesman Award.

Abrams is the author of five books: Undue Process, Security and Sacrifice, Faith or Fear: How Jews Can Survive in a Christian America, Tested by Zion: The Bush Administration and the Israeli-Palestinian Conflict, and most recently Realism and Democracy: American Foreign Policy After the Arab Spring. He is the editor of three more, Close Calls: Intervention, Terrorism, Missile Defense and "Just War" Today; Honor Among Nations: Intangible Interests and Foreign Policy; and The Influence of Faith: Religious Groups and U.S. Foreign Policy.

He is fluent in French and Spanish.