Having served in numerous positions of international influence, Daniel Kurtzer is a uniquely qualified speaker with a distinct perspective on the geopolitical realties and culture of one of the world's most troubled regions. During a 29-year career in the U.S. Foreign Service (including U.S. Ambassador to Israel and U.S. Ambassador to Egypt) he was instrumental in formulating and executing U.S. policy toward the Middle East peace process. He was recently appointed State Department Foreign Affairs Policy Board by Secretary of State John Kerry.

Please send me availability & fees for Daniel Kurtzer
Thank you for your interest in this Harry Walker Agency speaker.
You will hear from one of our agents in the next 24 hours. If you have any other questions or information, please call us right away at 646.227.4900. Are you also interested in learning more about other speakers? Create a My Speaker List.
Rave Reviews About Daniel Kurtzer
“
All I can tell you is that this man is a gem. For Israel Independence Day, our audience consisted of a wide-range of people: Democrats, Republicans, left, right and center, Reform, Conservative and Orthodox - including members of our interfaith community. He is articulate, extremely knowledgeable, gets his points across most coherently, was totally accepted by everyone and was a true "mensch".He also has a good sense of humor - which does not hurt. He spoke without a note, was "up" on all aspects of world affairs - as we had a question and answer period and there were questions about the "world" situation which he did not cover in his speech and the facts just came rolling off his tongue. As you know, my standards are very high. I can only tell you that Ambassador Kurtzer is tops on the list and will be an asset in any community or academic setting.

Drawing from his experiences as a prominent United States diplomat, Ambassador Kurtzer expounds on how policy in the Middle East ultimately influences our everyday lives and the global community, providing an unparalleled perspective on the most up-to-date developments in this troubled region. His i ...

Drawing from his experiences as a prominent United States diplomat, Ambassador Kurtzer expounds on how policy in the Middle East ultimately influences our everyday lives and the global community, providing an unparalleled perspective on the most up-to-date developments in this troubled region. His insightful analysis of the obstacles ahead will leave audiences with an insider's perspective of their world and on the prospects for peace in the Middle East. 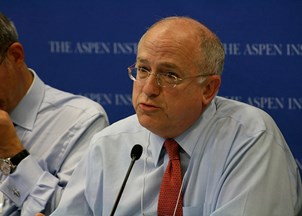 Former U.S. Ambassador to Israel (2001-05) and Egypt (1997-2001), DANIEL KURTZER is in-demand for his sharp analysis on foreign relations and conflict in the Middle East. Sought-out for in-depth interviews on NPR and the Woodrow Wilson School's “Politics and Polls” Podcast, Kurtzer offers shrewd insights on the current administration’s approach to relations with Israel, highlighting shifts in strategy and approach from one administration to the next, and what the impacts are. He sheds illuminating light on the prospect for peace agreements in the Middle East, and is the author of three books on the subject: The Peace Puzzle, Pathways to Peace, and Negotiating Arab-Israeli Peace. A current Professor in Middle Eastern Policy Studies at Princeton University, Kurtzer is heralded for his frank and realistic analysis on the prospects for peace, often drawing praise on Twitter. 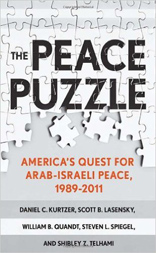 The Peace Puzzle: America's Quest for Arab-Israeli Peace, 1989-2011 (Published in Collaboration with the United States Institute of Peace) 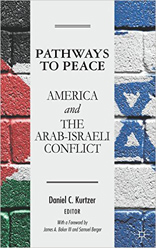 Pathways to Peace: America and the Arab-Israeli Conflict Daniel C. Kurtzer is the S. Daniel Abraham Professor of Middle East policy studies at Princeton University's Woodrow Wilson School of Public and International Affairs. Following a 29-year career in the U.S. Foreign Service, Kurtzer retired in 2005 with the rank of Career-Minister.

State for Near Eastern Affairs, and Principal Deputy Assistant Secretary of State for Intelligence and Research.
Throughout his career, Kurtzer was instrumental in formulating and executing U.S. policy toward the Middle East peace process. Secretary of State John Kerry appointed Kurtzer to the Secretary's Foreign Affairs Policy Board. Governor Chris Christie appointed Kurtzer to serve on the New Jersey-Israel State Commission.