The quintessential sportscaster, Emmy Award-Winner Bob Costas has been covering the greatest, most inspiring sporting events for more than 25 years. Known for his class and charm, he has come to be one of the most respected sports journalists of our time. At the MLB Network, Bob provides  play-by-play on selected game telecasts, and inaugurated the very well received Studio 42 interview series. Bob also narrates the MLB Remembers historical pieces for the network.

Please send me availability & fees for Bob Costas
Thank you for your interest in this Harry Walker Agency speaker.
You will hear from one of our agents in the next 24 hours. If you have any other questions or information, please call us right away at 646.227.4900. Are you also interested in learning more about other speakers? Create a My Speaker List.
Rave Reviews About Bob Costas
“
He was FANTASTIC! Everyone loved him. Some said he was the best speaker we ever had. He was funny, entertaining, serious, and substantive. A great package.

- The Jewish Federation of Metropolitan Chicago
”

A Fan’s Case for Baseball

Bob Costas loves baseball. In this speech, universally received by sports lovers, he addresses the problems and opportunities facing our nation’s greatest pastime. ...

Bob Costas loves baseball. In this speech, universally received by sports lovers, he addresses the problems and opportunities facing our nation’s greatest pastime.

On the Record with Bob Costas

In a captivating presentation, Costas discusses the economics of sports, his inspiring Olympic tales, and his most memorable interviews. ...

In a captivating presentation, Costas discusses the economics of sports, his inspiring Olympic tales, and his most memorable interviews. 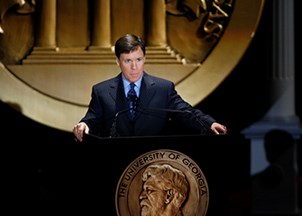 Why Bob Costas is a win for meeting planners

In a very engaging and humorous presentation, BOB COSTAS shares with audiences his insight into today’s current events and his experiences in the sports and broadcasting worlds to rave reviews: "Bob was captivating, so generous and thoughtful in his comments and utterly gracious." (McCarthey Family Foundation)

Named by his peers “National Sportscaster of the Year” an unprecedented eight times, Costas has been a prominent player in the coverage of every major sport for the past three decades. His thoughtful commentary on a variety of issues has established him as one of his generation’s most distinctive voices. He has a record 25 Emmy Awards to his name—more than any other sportscaster—and is the only person to win in all three categories for news, sports and entertainment. For over 20 years, Costas served as NBC’s primetime host of the Olympic Games from Barcelona to Sochi as well as Football Night in America, Nightly News, Rock Center, TODAY and Costas Tonight. Beyond NBC, his recent work with the Major League Baseball Network and his New York Times best seller, Fair Ball: A Fan’s Case for Baseball, garnered critical acclaim. In 2012, he was awarded the prestigious Walter Cronkite Award for distinction in journalism and was elected to the National Sportscasters and Sportswriters Association Hall of Fame. 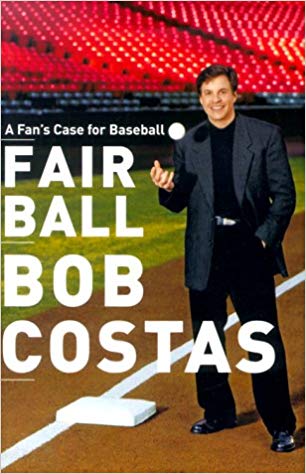 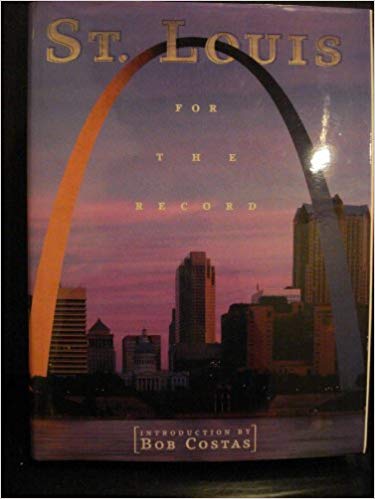 St. Louis: For the Record

Bob Costas, a 28-time Emmy Award-winning journalist, is one of the most respected and honored broadcasters of his generation, and has handled a wide array of assignments, including play-by-play, studio hosting and reporting. He served as NBC’s primetime host for a U.S.-television record 11 Olympics – every Olympics on NBC since 1992, including the 2012 London Games, which is the most-watched television event in U.S. history, reaching 217 million viewers – before passing the torch to Mike Tirico on Feb. 9, 2017.

In December 2017, Costas was selected as the 2018 recipient of the Ford C. Frick Award, presented annually for excellence in broadcasting by the National Baseball Hall of Fame and Museum. He will be recognized during the Hall of Fame Awards Presentation in July 2018 as part of Hall of Fame Weekend.

From 2006-16, Costas served as the host of the critically-acclaimed and most-watched weekly studio show in sports, Football Night in America. He was also host of Football Night, the pregame show for NBC’s Thursday Night Football package, in its debut 2016 season.

Previously, Costas served as host of NBC’s presentation of the Preakness Stakes and Belmont Stakes, as well as U.S. Open and Ryder Cup coverage. He contributed to a variety of NBC News programs, including NBC Nightly News and TODAY. He also handles play-by-play duties and is a commentator for MLB Network.

Costas first worked on NBC’s coverage of Major League Baseball, the NFL and college basketball.  From 1982-89, Costas teamed with analyst Tony Kubek on MLB “Game-of-the-Week” telecasts, forming one of baseball’s most popular broadcast teams.  During that time, he served as the play-by-play commentator for Game of the Week assignments and coverage of the American League Championship Series in 1983, 1985, 1987 and 1989.  He also hosted All-Star Game pre-game shows in those same years and World Series pre-games in 1982, 1984, 1986 and 1988.

Under the umbrella of The Baseball Network, Costas handled play-by-play chores for the 1994 All-Star Game and called 1995 Division Series and ALCS games on NBC.  That year, he also called his first World Series on television, teaming with analysts Joe Morgan and Bob Uecker on Games 2, 3 and 6.  The trio of Costas, Uecker and Morgan again joined in 1997 for NBC’s exclusive coverage of the World Series, marking Costas’ first start-to-finish coverage of the Fall Classic.  The 1998 ALCS, 1999 NLCS, 1999 World Series and 2000 ALCS showcased the duo of Costas and Morgan.   Costas and Morgan also called the 2000 Major League Baseball All-Star Game from Atlanta.

From 1984-92, Costas hosted NBC’s NFL pre-game show, NFL on NBC.  In 1996, he returned to the NFL pre-game, contributing commentaries and interviews.  He anchored the pre-game shows for Super Bowls XX, XXIII, XXVII, XLIII, XLVI and XLIX.  From 1990-91 through the 1995-96 NBA season, Costas served as the host of NBA Showtime, NBC Sports’ pro basketball pre-game show.  In November 1997, he moved from the studio to courtside to work as NBC’s top play-by-play man for NBA on NBC gametelecasts. Costas’ call of Michael Jordan’s game-winning shot at the buzzer in the deciding Game Six of the 1998 NBA Finals between Chicago and Utah was one of sportscasting’s most memorable calls of the modern era.  After three seasons as the lead NBA on NBC play-by-play voice – the last two and a half with acclaimed analyst Doug Collins – Costas volunteered to hand the NBA mike back over to the NBA’s signature voice, Marv Albert, for the 2000-01 season.

Costas also originated the popular Costas Coast-to-Coast nationally syndicated Sunday night sports radio talk show, and served as a regular host of the program through mid-1996.  From August 1988 through January 1994, he hosted his own Emmy Award-winning late-night interview television show, Later with Bob Costas, on NBC.

Costas began his broadcasting career in 1974 at WSYR-TV and Radio in Syracuse, N.Y.  He later joined KMOX Radio in St. Louis, working as play-by-play voice of the ABA Spirits of St. Louis.  He also called play-by-play for one season of Chicago Bulls road-game telecasts.  He then went on to handle regional NFL and NBA assignments for CBS Sports while acting as the radio voice of University of Missouri basketball from 1976 to 1981.

In April 2000, Costas’ book, Fair Ball: A Fan’s Case for Baseball made The New York Times Best Seller list.  Net proceeds from the book were donated to B.A.T – Baseball Assistance Team, which provides financial assistance to those members of the baseball family in need.  Costas won his first Emmy for play-by-play work on his call of the 1997 World Series; and won Emmys for writing in 1988 and 1995.  The latter award was for his moving tribute to the late Mickey Mantle on NBC Nightly News.  In addition to his 28 Sports Emmy Awards, Costas’ interview program Later with Bob Costas won the 1993 Emmy Award for Outstanding Informational Series. In November 2011, Costas received a News & Documentary Emmy Award and critical acclaim for his exclusive interview with Jerry Sandusky.

Costas has been honored as Sportscaster of the Year by the National Sportswriters and Sportscasters Association a record eight times and in June 2012 Costas was inducted in to the NSSA Hall of Fame.  He won first in 1985, when at 33 years old he became the youngest person to win the award.  He added awards in 1987, 1988, 1991, 1992, 1995, 1997 and 2000.    In March 2000, Costas was named Favorite Sportscaster at the TV Guide Awards, based on balloting by readers of TV Guide magazine.

Costas won acclaim as host of HBO’s On The Record, a weekly show on which Costas interviewed luminaries from the worlds of sports, entertainment and politics.  He also hosted Costas NOW, on HBO, a monthly one-hour sports magazine program, and Costas Tonight, an interview show on NBCSN. Costas also hosted HBO’s Inside the NFL from 2002-08.  In 2005, he also signed on with CNN as a substitute for Larry King on Larry King Live.