A man who defies categorization, William O. Perkins' financial acumen has won him many fans with an unconventional approach to investing and life. The hedge fund manager has made plenty of money in a short time but his philosophy sets him apart from most high net worth players: spend it all before you die…and have fun doing it.

Perkins' unorthodox approach to investing has made him a maverick, especially in the rough and tumble cowboyesque world of energy trading. His tremendous success, refreshing attitude, and incomparable energy have made him in-demand by major media outlets, and he's been interviewed on CNBC, featured on the front page of The Wall Street Journal, and more.

Currently developing a book based on his philosophy to Spend-It-All-Before-You-Die, Perkins' versatility, bigger-than-life lifestyle, and shrewd insights into the world of business, investment and personal and professional success leave audiences informed and electrified. 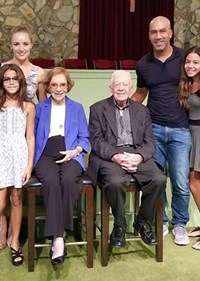 Please send me availability & fees for Bill Perkins
Thank you for your interest in this Harry Walker Agency speaker.
You will hear from one of our agents in the next 24 hours. If you have any other questions or information, please call us right away at 646.227.4900. Are you also interested in learning more about other speakers? Create a My Speaker List.
Learn more about Bill Perkins
Articles

Perkins grew up in Jersey City, New Jersey and graduated as an Electrical and Electronics Engineer from the University of Iowa. After graduating, he worked under oil trader, John D. Arnold for several years before starting his own hedge fund. During his 12-year career, Perkins directed NorthernStar Natural Gas and was the CEO of Cutuco Energy Central America. Perkins actively traded the stock market turning a $1.25 million profit trading Goldman Sachs in September 2008. In 2009, Perkins became involved in film production, producing various films including After.Life (2009), Unthinkable (2010), and Cat Run (2011).