Tony Gardner, former U.S. Ambassador to the European Union, has devoted more than 27 years of his distinguished career to U.S.-European affairs as a government official and lawyer. During his service as U.S. Ambassador until 2017, he played a pivotal role in some of the most challenging issues in the U.S.-EU relationship, including the negotiations to conclude a Transatlantic Trade and Investment Partnership Agreement (TTIP), the Privacy Shield Agreement facilitating the transatlantic transfer of personal data by companies based in Europe and the Umbrella Agreement facilitating the transatlantic transfer of data between law enforcement authorities. He was also closely involved in aspects of the EU Digital Single Market and in U.S.-EU coordination of sanctions against Russia following its annexation of Crimea.

Ambassador Gardner is a board member of Iberdrola and Brookfield Business Partners, a non-resident fellow of the German Marshall Fund and a member of the advisory boards of the Centre on European Reform and the European Policy Centre.  He also serves as Senior Advisor to the Brunswick Group, and as Senior Counsel at Sidley Austin LLP.

Prior to his role as U.S. Ambassador to the EU, Tony served as managing director of a London-based private equity firm and as an Executive Director at GE Capital. He also served as Director for European Affairs on the U.S. National Security Council, where he was responsible for U.S. relations with the EU.

Please send me availability & fees for Anthony Gardner
Thank you for your interest in this Harry Walker Agency speaker.
You will hear from one of our agents in the next 24 hours. If you have any other questions or information, please call us right away at 646.227.4900. Are you also interested in learning more about other speakers? Create a My Speaker List.
Rave Reviews About Anthony Gardner
“
Thanks to his deep personal and professional roots in Europe, Ambassador Gardner displayed a rare understanding of European affairs and improved US-EU commercial and political ties at a critical time in the relationship. During his tenure he made relations with the European Parliament a priority on important issues relating to trade, data privacy and the digital economy.

The US-China Trade War: Populist Opportunism or Lessons for a New World Order? 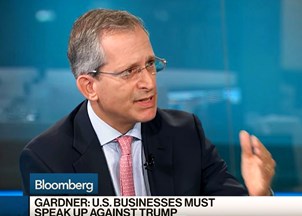 Anthony Gardner in the news

Having served as U.S. Ambassador to the European Union in the Obama administration, Director for European Affairs on the U.S. National Security Council in the 90's, six years as Managing Director a prominent London-based private equity firm, and various other private and public sector positions dealing directly with U.S.-E.U. financial and legal negotiations, ANTHONY GARDNER is exceptionally well positioned to offer the most discerning insights to the latest U.S.-E.U. news.  You can catch a selection of his latest media appearances here.

A New Era in US-EU Relations?: The Clinton Administration and the New Transatlantic Agenda

U.S. Can Play Russia's Game, Says Gardner - Bloomberg
POLITICO Playbook: How Europe can help Biden snuff out Trump(ism) - Politico
Ex-U.S. Ambassador Tells Europe They Need to Help Biden Win to Stave Off Another Trump - Mediaite
UK continues 'to punch well above its weight' - Yahoo! News
Former US envoy to EU: 'Our democracy is fragile' - EU Observer
It would be a ‘mistake’ for the US to start a trade war with the EU, says former ambassador - CNBC
Trump and the WTO - Brunswick Review
Biography

Ambassador Gardner is a board member of Iberdrola and Brookfield Business Partners, a non-resident fellow of the German Marshall Fund and a member of the advisory boards of the Centre on European Reform and the European Policy Centre. He also serves as Senior Advisor to the Brunswick Group, and as Senior Counsel at Sidley Austin LLP.

On February 18, 2014, he was sworn in as the U.S. Ambassador to the European Union and held this position until January 2017. He presented his credentials to European Council President Van Rompuy and European Commission President Barroso on March 18.

Prior to assuming his role as Ambassador to the EU, Ambassador Gardner was Managing Director for six years at Palamon Capital Partners, a private equity firm based in London, that focuses on providing growth capital to fast growing businesses in a wide variety of service sectors throughout Western Europe. In that capacity he managed financing, legal and tax structuring issues related to the firm’s acquisitions and divestitures.

Previously, Ambassador Anthony Gardner served as an Executive Director in the leveraged finance departments of Bank of America and GE Capital and as a Director in the international acquisitions group of GE International, all based in London. He has also worked as a Senior Associate at international law firms in London, Paris, New York, and Brussels.

Ambassador Gardner has dedicated more than twenty years of his career to U.S.-European affairs, as a government official, lawyer and investor. He served as Director for European Affairs on the National Security Council in 1994-95. During that period, he worked closely with the U.S. Mission to the European Union to launch the New Transatlantic Agenda, a joint commitment to promoting peace and stability, democracy, and development around the world; responding to global challenges; contributing to the expansion of world trade and closer economic relations; and building bridges across the Atlantic. Ambassador Gardner also participated in the launch of the Transatlantic Business Dialogue, an advisory group bringing together executives from leading American and European companies to advocate for a barrier-free transatlantic market.

Prior to his government service, Ambassador Gardner worked with the Treuhandanstalt (German Privatization Ministry) in Berlin, with the Commission des Operations de Bourse in Paris, and as an intern at the Directorate General for Competition Policy at the European Commission in Brussels. He is the author of A New Era in U.S.-EU Relations?: The Clinton Administration and the New Transatlantic Agenda and numerous articles on EU affairs.

Anthony Gardner has been warning of trade war since May 2017, and businesses often laughed. He has recently been proved right.

Anthony Gardner holds a BA in Government from Harvard University, an MPhil in International Relations from Oxford University, a JD from Columbia Law School, and a Masters in Finance from London Business School. He is also a member of the Council on Foreign Relations, has served as Trustee of the Guggenheim UK Charitable Trust, and a Board Member for the Peggy Guggenheim Collection in Venice. Ambassador Gardner is fluent in French, Italian, and Spanish, and also speaks German.