A three-time James Beard Award-winning TV personality, chef, writer and teacher, Andrew Zimmern is universally regarded as one of the most versatile and knowledgeable personalities in the food world. As the creator, executive producer and host of the Bizarre Foods franchise on Travel Channel, Andrew has explored cultures in more than 170 countries, shining the spotlight on impactful ways to think about, create, and live with food.

According to Andrew, “Diversifying the American diet is the most important step we can take towards decentralizing our food system, combating food insecurity, eliminating hunger and restoring wellness to our society.”

Among his many business ventures, Andrew has launched Andrew Zimmern’s Canteen, reflecting his fascination with food history from around the world. The business has since expanded to include a brick and mortar location at Target Field, home of the Minnesota Twins. Inspired by visits to countless street stalls and markets around the world, the fare at Andrew Zimmern’s Canteen reflects the perfect intersection of food and travel. Andrew has also launched Intuitive Content, a full-service production company dedicated to developing and producing original television series, broadcast specials, branded content series for both web and cable, and other digital content.

Thanks to his parents who had him traveling around the world mouth first, Andrew knew from a young age that he wanted a career in food. As a teenager, while his peers were picking up part-time summer jobs at the local landscape company, Andrew was spending days at the beach and nights cooking in Long Island restaurants. After attending The Dalton School and then Vassar College, Andrew was on the fast track to success cooking in New York City restaurants helmed by Anne Rosenzweig, Joachim Splichal, and Thomas Keller. He helped open and run a dozen restaurants, but he was also an active addict and alcoholic spiraling out of control. Crashed and burnt, he lost his apartment and spent a year living on the streets, stealing to support his addiction, ultimately leading to one last intervention by close friends. That brought him to the renowned Hazelden Foundation in Minnesota. Transforming his life around sobriety, Andrew began work again washing dishes and bussing tables at the Minneapolis outpost of New York's Café Un Deux Trois restaurant in 1992. When a line cook fortuitously didn't show up for his shift, Andrew took over his station, and in seven weeks was named Executive Chef, changed the menus, and turned Un Deux Trois into one of America's first successful gastro-bistros during his six year tenure.

Play
Now
In Conversation- Changing the World Through Food | SXSW [51:26]

Food: A Global Perspective on the State of our Food Life

Andrew Zimmern takes you with him for a whirlwind tour of his world travels, informing and entertaining as he connects the audience to both his "boots on the ground" experience and his philosophies of both food and life. His amazing stories cover everything from the great global food scene to how yo ...

Andrew Zimmern takes you with him for a whirlwind tour of his world travels, informing and entertaining as he connects the audience to both his "boots on the ground" experience and his philosophies of both food and life. His amazing stories cover everything from the great global food scene to how you really can change the planet one meal at a time, as he's experienced firsthand breaking bread (or other things!) with people from Syria and China to Cuba and the Kalahari desert. Inspiring, enlightening and always entertaining, Zimmern shows that the world is truly getting smaller, and that the best place to learn about it and other cultures, is at the dinner table, not in a museum.

The Adventure of Recovery

Stay far away from what William James called the evil of "contempt prior to investigation". Andrew Zimmern has used this motto as a bedrock of both his personal and professional life. While most people know him as the host of his own wildly popular TV show, they might not know that he is also a surv ...

Stay far away from what William James called the evil of "contempt prior to investigation". Andrew Zimmern has used this motto as a bedrock of both his personal and professional life. While most people know him as the host of his own wildly popular TV show, they might not know that he is also a survivor of drug addiction, alcoholism, and homelessness. Now in his 21st year of sobriety, his inspiring and funny story is a prescription for hope that can be applied to anyone regardless of their life situation. Zimmern grew up on the upper east side of NYC, was a daily drug user from the age of 15, and lay dying in a hospital bed at age 21 of acute alcohol poisoning. He continued to abuse drugs and booze for another 10 years before going homeless and off the grid in 1990. Drinking himself to death in a flop house hotel in January of 1992, he had a life-changing experience that saw him check into rehab, sober up, and stay clean. Devoting himself to helping others, his life changed, and his show Bizarre Foods is a direct result of his channeling that life choice, telling his stories through food and travel adventures. Zimmern combines his personal and professional stories in an audio and video presentation detailing his fall and rise, his experiences in recovery, and how those lessons have informed his life as a husband, adoptive father and activist for the social issues he holds dearest. Zimmern believes that the best way to change the world is to share a meal with a stranger and his family, telling stories from the fringe as you seek to learn about the world and yourself in the global classroom of the traveler's universe. His funny and inspiring message spans both the personal and the professional, and he gladly exemplifies the necessity for a public face to be put on the private hell of addiction.

AZ and the Lost City of Ophir: Alliance of World Explorers Volume One 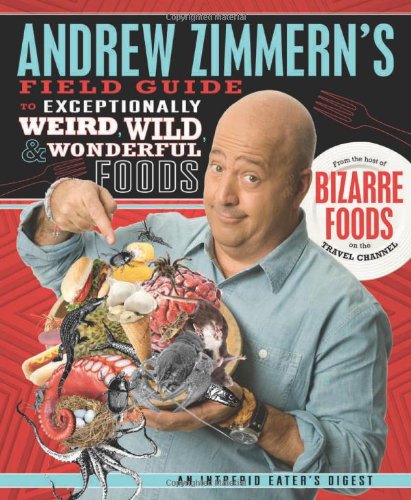 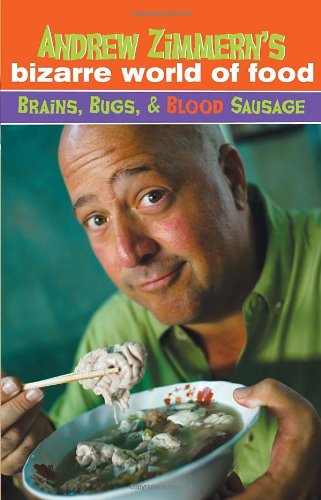 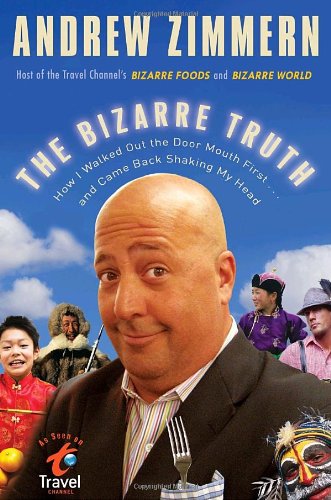 The Bizarre Truth: How I Walked Out the Door Mouth First . . . and Came Back Shaking My Head

A four-time James Beard Award-winning TV personality, chef, writer and teacher, Andrew Zimmern (andrewzimmern.com) is regarded as one of the most knowledgeable personalities in the food world. In 2020, Andrew returns to television with two new programs, What's Eating America premiering on MSNBC in February and a series airing in October on a Discovery lifestyle channel. As the creator, executive producer and host of Travel Channel’s Bizarre Foods franchise, Andrew Zimmern’s Driven by Food and The Zimmern List, he has devoted his life to exploring and promoting cultural acceptance, tolerance and understanding through food.

A Taste of the Good—and Bad— Life

Andrew knew from a young age he wanted a career in food. After attending The Dalton School and Vassar College, he cooked in New York City restaurants for Anne Rosenzweig, Joachim Splichal and Thomas Keller, amongst others. Andrew helped open and run a dozen restaurants, and at the same time was also an addict spiraling out of control. After a year spent living on the streets, an intervention by close friends brought him to the Hazelden Foundation in Minnesota. Transforming his life around sobriety, Andrew took a job washing dishes at Minneapolis’ Café Un Deux Trois. In 1992, he was named executive chef and during his six-year tenure, turned Un Deux Trois into an awarded, national caliber restaurant.

Making Moves in the Media

Passport Hospitality has partnered with Robert Montwaid and Gansevoort Construction to develop experiential food halls and markets in the historic Dayton’s building in downtown Minneapolis and in Atlanta’s Chattahoochee Food Works. Both are projected to open in spring 2020. Andrew has also collaborated with Minneapolis chef Gavin Kaysen to create KZ ProVisioning, a unique catering company for professional sports franchises. KZ ProVisioning works with the NHL’s Minnesota Wild and the NBA’s Timberwolves to provide healthy meals to the team’s players, families, coaches and locker room staff.

In 2014, Andrew introduced Intuitive Content, a full-service production company that develops and produces dynamic original television and broadcast specials, while partnering with companies to create brand-driven series and web content. Intuitive Content’s first television series, Andrew Zimmern’s Driven by Food, premiered on Travel Channel in August 2016. In their second series, The Zimmern List, Andrew reveals his favorite food experiences in cities across the globe. In 2019, The Zimmern List won a Taste Award for “Best Food Travel Series” and a silver Telly award. Andrew traveled the U.S. in search of passionate food truck entrepreneurs on Big Food Truck Tip, which aired on Food Network in fall 2019.

In 2020, Intuitive Content will premiere two new shows hosted by Andrew, including What's Eating America. Airing in primetime on MSNBC in February, this major new series explores the most provocative stories of our time told from Andrew’s singular perspective with his passion for politics, people, food and travel.

Beyond television, Intuitive Content works with clients on branded entertainment, including a partnership with Renaissance Hotels to create The Navigator’s Table and with Caribou Coffee to film Behind the ‘Bou. Their digital work includes Andrew in the Kitchen, a companion series to Bizarre Foods that was nominated for a James Beard Award in 2018, and Bravo TV’s Beats + Bites with the Potash Twins, which explores the intersection of music and food. Intuitive Content recently produced instructional cooking classes with Andrew for Yummly Pro and the new Food Network Kitchen app, which features live and on-demand cooking classes with Food Network chefs and culinary experts.

Andrew has won James Beard awards for "TV Food Personality" (2010), “TV Program on Location” (2012), and “Outstanding Personality/Host” (2013 and 2017). In 2016, Andrew was named one of “America’s 50 Most Powerful People in Food” by The Daily Meal, one of the “30 Most Influential People in Food” by Adweek and as one of Fast Company’s “Most Creative People in Business.” In 2017, Andrew won the award for Best Host at the Cynopsis TV Awards. According to Eater, “Zimmern knows more about the foods of the world and the history of modern gastronomy than anyone else in our solar system. He’s a walking, talking food encyclopedia, and a true omnivore.” Andrew has appeared as a contestant on Iron Chef, and as a guest judge on episodes of Chopped, Top Chef Masters, Iron Chef and Top Chef. In 2016, he co-starred as a mentor for Season 2 of Food Network’s All-Star Academy.

Andrew hosted the three part 2019 Conversations at Copia in partnership with the Culinary Institute of America as a way to publicize, educate and amplify the hard conversations around social justice and food. He is an entrepreneur-in-residence at The Lewis Institute for Social Innovation at Babson College. Through the James Beard Foundation and the Culinary Institute of America he funds Andrew Zimmern’s Second Chances Scholarships, which offer students faced with extreme challenges an opportunity to overcome these hardships and follow a culinary path. Andrew sits on the board of directors of Services for the UnderServed, Project Explorer/EXPLR, Soigne Hospitality and Taste of the NFL, and is the International Rescue Committee’s Voice for Nutrition. Other charities Andrew works with include Lovin’ Spoonfuls, ONE, Food Policy Action Committee, No Kid Hungry and the Charlize Theron Africa Outreach Project. In his rare downtime, Andrew relaxes in Minneapolis, spending time with family and his pug Pretzel.