Peabody and Emmy Award-winning broadcast journalist Amna Nawaz currently serves as co-anchor of PBS NewsHour. Her diligent reporting and skillful moderation have shaped coverage of some of the most important events in recent history. Amna’s portfolio is broad, delving into politics, foreign affairs, education, climate change, culture and sports to great acclaim, with her NBC News Special ‘Inside the Obama Whitehouse’ earning her an Emmy Award. From her distinguished position as NBC’s Islamabad Bureau Chief & Correspondent to her Peabody Award-winning work for NewsHour’s 'Global Plastic Problem', Amna’s signature thoughtful and thorough analysis establish her as one of the foremost voices in journalism today.

Leading notable panels such as the Aspen Ideas Festival and the RespectAbility #ADA30 Summit 2020, Amna’s insightful moderation elevates conversations. In a ground-breaking moment, Amna co-moderated a 2019 Democratic Primary Debate, becoming the first Asian American and first Muslim American to do so. She has interviewed international newsmakers, influential voices in the arts, and travelled from border towns to Appalachia covering vital issues and enriching national and international dialogue. 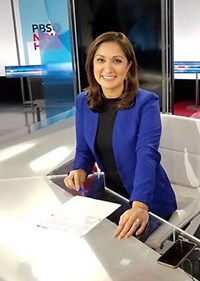 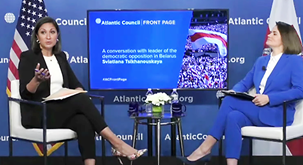 Please send me availability & fees for Amna Nawaz
Thank you for your interest in this Harry Walker Agency speaker.
You will hear from one of our agents in the next 24 hours. If you have any other questions or information, please call us right away at 646.227.4900. Are you also interested in learning more about other speakers? Create a My Speaker List.
Rave Reviews About Amna Nawaz
“
Amna was outstanding! Gracious, delightful, simply perfect. The tone of her speech hit the spot. Everyone loved it.

Play
Now
Reporting - 'Under the Skin' delves into systemic racism and its toll on health | PBS NewsHour [7:49]

Prior to joining PBS NewsHour in April 2018, Nawaz was an anchor and correspondent at ABC News, anchoring breaking news coverage and leading the network’s livestream coverage of the 2016 presidential election. Before that, she served as foreign correspondent and Islamabad Bureau Chief at NBC News. She is also the founder and former managing editor of NBC’s Asian America platform, built in 2014, to elevate stories from America’s fastest-growing and most diverse population.

At the NewsHour, Nawaz has reported from the White House, across the country, and around the world on a range of topics including politics, immigration, foreign affairs, education, gun violence, criminal justice reform, the climate, culture, and sports.

She also serves as an NBC News and MSNBC political contributor.

Throughout her career, she has covered major events such as the January 6th attacks on the U.S. Capitol; the mass shooting at Robb Elementary School in Uvalde, Texas; the elections and inaugurations of President Joe Biden, President Donald J. Trump, and President Barack Obama; Hurricane Katrina; the 2010 Haiti earthquake; the U.S. war in Afghanistan; and the September 11th attacks.

On January 6, 2021, Nawaz reported live for several hours from outside the U.S. Capitol building as it was under attack, part of a NewsHour team honored with a Peabody Award for its coverage.

Nawaz previously won a Peabody for her documentary work on 2019’s The Plastic Problem, examining global plastic pollution and efforts to address it. Her other documentaries include Raising the Future, a 2021 documentary on America’s childcare crisis; and 2022’s Life After Lockup, which followed the lives of four formerly-incarcerated people to track the challenges of re-entry after prison.

In 2020, Nawaz hosted a criminal justice podcast, Broken Justice, which was named a finalist for the Silver Gavel Awards, honoring work that fosters the American public’s understanding of law and the legal system. She also hosted 2021’s The Longest Year, a pandemic-focused podcast series on the many ways Covid-19 changed Americans’ lives.

Nawaz has hosted three seasons of the primetime PBS series, Beyond the Canvas, featuring profiles and interviews of some of the world’s leading artists, musicians, and creators.

In 2019, Nawaz became the first Asian American and the first Muslim American to moderate a presidential debate.

While at NBC News, she was the first foreign journalist to gain access to North Waziristan – then the global hub of Al Qaida and the Taliban - while pregnant with her first daughter.

In 2022, Nawaz was the recipient of the Asian Pacific American Institute for Congressional Studies’ Vision Award and the Media Award from the Muslim Affairs Public Council’s Media Award. She has also been honored with the American Muslim Institution’s Excellence in Media Award in 2018 and an Emmy award as part the 2009 NBC News Special “Inside the Obama White House.”

She lives with her husband, Paul, and their two daughters in the Washington, D.C. area.