Even the best businesses can fail. Kodak, Hostess and Circuit City were all once market leaders but eventually bankruptcies. Their products became dated, customers stopped caring and soon the former market giants were irrelevant. Why? Because they refused to change.

Excelling at what you want to do doesn’t create business success – instead figure out what people want to buy. Your organization must either adapt with market trends and let go of old business strategies or disappear like Polaroid. What made your company successful five years ago most likely won’t produce the same results today and certainly won’t in five years.

But even when you’re willing to change, how do you decide what to do next?

Winning means thinking and acting outside the box. Adam Hartung’s more than 20 year track record developing and implementing strategies to take advantage of emerging trends has shown companies like Eaton, Hyatt and Integrys Energy how to unleash business growth through innovation. When new competitors and market shifting trends threaten your core business, Adam will show you how to be an industry leader by not asking customers what they want and instead giving them what they need.

Please send me availability & fees for Adam Hartung
Thank you for your interest in this Harry Walker Agency speaker.
You will hear from one of our agents in the next 24 hours. If you have any other questions or information, please call us right away at 646.227.4900. Are you also interested in learning more about other speakers? Create a My Speaker List.
Rave Reviews About Adam Hartung
“
After seeing Adam speak at a very well-attended ACG meeting, I asked him if he would like to speak at one of our events on the spot. As the incoming President for the 2 year old Chicago Chapter of the Association for Strategic Planning, I wanted to bring in a high-impact speaker to give our members and prospective members a clear sense of the quality of value that we provide as an organization and to draw others to attend. Adam was thoroughly knowledgeable, entertaining, but best of all, very insightful and provocative – I had many people thank us for having him present and I believe it helps our image and growth plans.

Play
Now
How Your Environment Opens Door to Innovation

How to identify and become a game changer

How to grow revenue while lowering your Status Quo Risk

Adam can focus his workshops entirely on your organization and your industry where you’ll learn to:

Whether you’re hosting an association or industry convention, Adam can adapt his strategy workshops to affiliate diverse businesses simultaneously. His multi-organization workshops focus on the external market shifts rather than specific attributes from each individual organization allowing a cross- ...

Whether you’re hosting an association or industry convention, Adam can adapt his strategy workshops to affiliate diverse businesses simultaneously. His multi-organization workshops focus on the external market shifts rather than specific attributes from each individual organization allowing a cross-pollination of ideas from different industries to enhance your company’s perspective. These workshops help multiple companies simultaneously understand how to:

Board of Directors are vital to guiding a company through a turbulent marketplace. Adam offers workshops for Boards and C-level management teams to understand their Status Quo Risk and develop a response. Identify and assess your Status Quo Risk Pressure test your plans for vulnerability to Status ...

Board of Directors are vital to guiding a company through a turbulent marketplace. Adam offers workshops for Boards and C-level management teams to understand their Status Quo Risk and develop a response.

Adam’s weekly posts have boldly and correctly predicted the future of companies such as Sears, RIM and Microsoft. Covering all industries from small businesses to large corporations, follow Adam on Forbes and gain insight to the latest market trends. 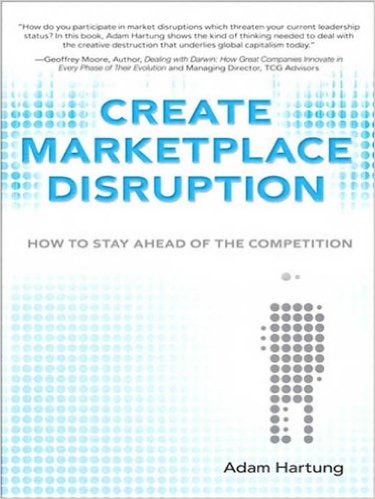 Create Marketplace Disruption: How to Stay Ahead of the Competition

Adam has been the No. 1 Leadership columnist for Forbes.com since 2009, written a quarterly column for CIO Magazine since 2010 and been a contributing editor for the International Journal of Innovation Science since its founding in 2008. His columns have boldly predicted highly unexpected declines for market leaders such as Tribune, Sears, and Research in Motion years before anyone else.

For two decades, Adam’s accurate forecasts about market shifting trends and his predictions for industry leading corporations has made him a frequent press interviewee regarding Apple, Microsoft, HP and other tech companies, as well as the automobile, media and retail industries. His insight to business growth and overcoming organizational obstacles have been featured in Inc, Adweek, Washington Times and on BBC television.

Since 2004, Adam has been CEO and Managing Partner of Spark Partners, a strategy and transformation consultancy. In 2010, Adam became the founding CEO of Soparfilm Energy, a corporation that invested early in fracking for oil and gas production. Additionally, Adam has been on the Board of Directors at several successful privately held companies, including Crosfield Electronics and Benchmark Technologies in the U.K., Biometric Access Corp. and Apex Interactive and in the U.S.  Adam provides board advisory services and is a certified Fellow in the National Association of Corporate Directors (NACD) where he is a regular speaker on risk management.

Adam was formerly an executive with PepsiCo and DuPont and is a Boston Consulting Group alumni. Adam received his MBA from the Harvard Business School with Distinction.  He now travels the globe giving keynotes and leading risk management workshops sharing his insights to how companies and executives can succeed.  You visit his website at adamhartung.com .