Widely considered the most powerful woman in Israel since Golda Meir, Tzipi Livni is a former Foreign Minister of Israel, Vice Prime Minister, Minister of Justice, and Leader of the Opposition. A politician, diplomat and lawyer, she is known for her efforts to resolve the Israeli-Palestinian conflict.

Livni has served in eight different cabinet positions throughout her career, setting the record for most government roles held by an Israeli woman. Consequently, she has achieved a number of milestones in Israeli government, as the first female Vice Prime Minister, Justice Minister, Agriculture Minister, Immigration and Absorption Minister, and Housing Minister.

Named one of "150 Women Who Shake the World" by Newsweek and The Daily Beast, and included in the "Time 100" and Forbes' "100 Most Powerful Women," Livni has been sought-out to speak everywhere from The World Economic Forum to Fortune's "Most Powerful Women" Summit. 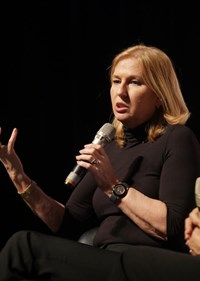 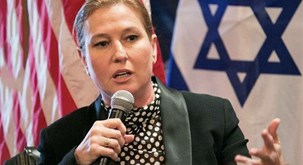 Please send me availability & fees for Tzipi Livni
Thank you for your interest in this Harry Walker Agency speaker.
You will hear from one of our agents in the next 24 hours. If you have any other questions or information, please call us right away at 646.227.4900. Are you also interested in learning more about other speakers? Create a My Speaker List.
Rave Reviews About Tzipi Livni
“
Tzipi Livni was the finest Israeli political leader and public speaker we’ve heard since the days of Abba Eban and Golda Meir … Tzipi Livni is warm, personable, and was very well received.

Play
Now
In Conversation - The reality of peacekeeping in the Middle East | Fortune Most Powerful Women [28:41]

Women’s empowerment: Seizing on the spirit of the #MeToo movement

Tzipi Livni’s rapid rise through the Israeli political scene took her to the height of power, into the heart of government, and an all-male security cabinet. She is the first women since the days of Golda Meir to have served in the highest senior government roles, including Foreign Minister and Acti ...

Tzipi Livni’s rapid rise through the Israeli political scene took her to the height of power, into the heart of government, and an all-male security cabinet. She is the first women since the days of Golda Meir to have served in the highest senior government roles, including Foreign Minister and Acting Prime Minister.

In this compelling conversation, Livni speaks about her time at the top of Israeli politics, on making tough decisions and fighting for her ideas and beliefs. She shares her experience of being the only woman sitting in the Security Cabinet, having to make difficult choices during wartime, deal with severe terrorist threats, and on being the chief negotiator for peace in a smoked-filled room. Livni also reflects on her pre-political life as a pioneer shattering glass ceilings, and entering into worlds that were traditionally open only to men. Forced to choose between a career in the Mossad or marriage, Livni chose the latter, juggling a full-time career with married life. She opens up about her first-hand experiences witnessing the inferior representation of women in the workplace. Sharing bold inspirational and tangible lessons, Livni dives into her personal journey and work fighting for a woman’s right to pursue whatever career she chooses.

A Shared Vision for Israel and World Jewry: Beginning a New Dialogue

Renowned Israeli politician, diplomat and lawyer Tzipi Livni shares a vision of the State of Israel based upon the Declaration of Independence, that includes values that both Israel and Jewish communities around the world share. Drawing on her extensive political and personal experience, Livni highl ...

Renowned Israeli politician, diplomat and lawyer Tzipi Livni shares a vision of the State of Israel based upon the Declaration of Independence, that includes values that both Israel and Jewish communities around the world share. Drawing on her extensive political and personal experience, Livni highlights how peace, liberal values, equal rights, and bipartisanship can exist in harmony with support for Israel. She presents this vision of Israel through her personal story. Livni’s parents, both freedom fighters who fought in the Irgun during the establishment of the state, were imprisoned, escaped, and became the first couple to get married in Israel. In this open discussion on the future of Israel-Diaspora relations throughout the world, Livni reveals details from her time as Israel's chief negotiator for peace with the Palestinians and gives audiences the answers that enable them to stand proudly  for Israel as a Jewish and democratic state. Ultimately, she reveals how a Jewish democratic state was the founding vision of the State of Israel and why it should form the basis for a new dialogue between Israel and World Jewry.

Changes in Democracies: The Challenges of Globalization, Nationalism, and Liberalism

Tzipi Livni’s experience goes beyond theories. It is based upon her time as one of Israel’s leading decision-makers, serving as Foreign Minister and Vice Prime Minister, and her work spearheading campaigns to oppose anti-democratic legislation in Israel. In this candid and compelling talk, Livni sha ...

Tzipi Livni’s experience goes beyond theories. It is based upon her time as one of Israel’s leading decision-makers, serving as Foreign Minister and Vice Prime Minister, and her work spearheading campaigns to oppose anti-democratic legislation in Israel. In this candid and compelling talk, Livni shares her perspective as a leading voice in standing up for democracy, based on her firm belief that democracy is not a technical system in which the majority rules, but is based on a liberal and democratic set of values. Touching on her work with a global bipartisan task force of distinguished international leaders-- which wrote with the Atlantic Council the declaration of principles for democracy-- Livni shares a vision for the future. She reveals how to empower a younger generation; how to combat the current wave of populism; and how to address democracies' toughest challenges.

Livni was born in 1958 in Tel Aviv. Her parents both belonged to the right-wing revisionist Ze’ev Jabotinsky, and were fighters in the Irgun-“Etzel” underground militia that fought against the British for the establishment of the State of Israel. Her father Eitan was the Irgun’s chief operation officer who met her mother Sara, a combat fighter, in an Irgun raid on a British Mandatory money train. Both her parents were arrested by the British, and heroically escaped.

Livni’s parents were the first couple to get married in the newly declared State of Israel. Her father became a Likud Member of the Knesset.

Livni is married to Naftali and is a mother of two sons.

Livni served in the IDF – Israel Defense Forces. She graduated officer course with distinction, gaining the rank of First Lieutenant, and serving as platoon commander in Officers School.

Livni served in the Mossad, including an operational course and a one-year mission in Paris.

Livni served as director general  of the government-owned Companies Authority, one of only a few women at that time to have held this high governmental position. In this capacity she advanced changes in Israel’s economy through opening up markets for competition and privatizing government-owned enterprises.

Livni was first elected to Israel’s Parliament, the Knesset, in 1999

Livni is the most prominent leader promoting peace  with the Palestinians, based on the vision of two states for two peoples as a means of keeping the values of Israel as a Jewish-Democratic state.

Livni also established relationships based on trust with Arab and Muslim states, including those that do not have diplomatic relations with Israel.

Livni is known for her integrity in politics and was granted the Quality of Governance Award for her unique contribution to reinforcing the rule of law and protecting the principles of democracy, as well as for her contribution to the quality of immigrant absorption in Israel.

In 2007, Livni was recognized by Time magazine, who named her one of the 100 most influential people in the world.