Comedian, actor, TV host, and award-winning podcaster Nicole Byer is one of the most versatile and recognizable voices in comedy today. An early standout on MTV’s Girl Code, Byer is known for Lady Dynamite, Brooklyn 99, The Unicorn, Black Lady Sketch Show, Bojack Horseman, Tuca & Bertie, and 30 Rock. She produced and starred in the MTV/Facebook Watch series Loosely Exactly Nicole, co-created the Above Average web series Pursuit of Sexiness with Sasheer Zamata, and is the author of #VERYFAT #VERYBRAVE. Byer hosts Netflix’s Nailed It!, which earned her back-to-back Emmy nominations – she made history as the first Black woman to be nominated in the “Outstanding Host” category – and co-hosts TBS’ Wipeout alongside John Cena. The multi-hyphenate creative, whom Variety called “a star of uncommon charisma,” is one of the most sought-after performers in the industry and makes an impact with audiences of all kinds.

Byer has been featured in The Hollywood Reporter, Paste Magazine, Variety, NPR, the Los Angeles Times, and more, and has appeared on The Tonight Show Starring Jimmy Fallon, Jimmy Kimmel Live, The View, Peace of Mind with Taraji, among others. She is the award-winning host of multiple podcasts: Why Won’t You Date Me?, Best Friends, Newcomers, and 90 Day Bae, and is the two-time consecutive winner of the iHeartRadio Podcast Award for “Best Female Host.” Following her critically acclaimed first hour-long comedy special on Netflix, Nicole Byer: BBW (Big Beautiful Weirdo), Byer stars in Peacock’s The Grand Crew, as well as Netflix’s highly anticipated animated comedy series Bad Crimes. In addition to bringing star power and levity to any event, Byer shares insights about her career journey, how she balances her countless projects, and connects with audiences for a memorable event. 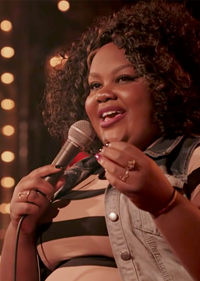 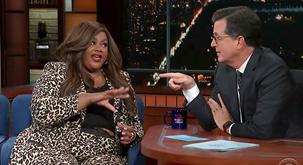 Comedy and Conversation with Nicole Byer

One of the most versatile and recognizable voices in the comedy landscape today, Nicole Byer brings the laughs and her unique brand of confidence and irreverence to a comedy Q&A. ...

One of the most versatile and recognizable voices in the comedy landscape today, Nicole Byer brings the laughs and her unique brand of confidence and irreverence to a comedy Q&A. 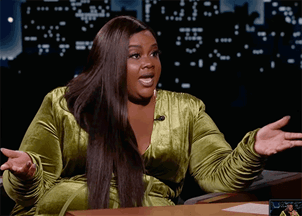 Speaker Spotlight: Nicole Byer is “a star of uncommon charisma” and one of the busiest people in Hollywood

It can be hard for people to determine where they’ve seen NICOLE BYER – as Jimmy Fallon gushed when she was a guest on his show – because chances are, audiences have seen her everywhere. From her long-awaited and critically-acclaimed hour-long comedy special on Netflix, titled Nicole Byer: BBW (Big Beautiful Weirdo), to her two reality TV competition hosting gigs – Nailed It! on Netflix, which earned her back-to-back historic Emmy nominations – and Wipeout on TBS, to the plethora of film and TV roles she is known (and loved) for – Byer is one of the busiest people in Hollywood, and her career is skyrocketing.

As listeners know from her multiple hit podcasts (Why Won’t You Date Me?, Best Friends, and more), the iHeartRadio Award-winning host has a gift for hilarious, authentic conversations that make a major impact with audiences. As Byer shared with the Los Angeles Times about the massive success of Nailed It!, she believes part of the appeal is the message of personal acceptance despite failure: “The whole journey is better than the product.” A profile in Variety described her as “a star of uncommon charisma,” and Byer brings this star power, and levity, to memorable events with audiences of all kinds.

#VERYFAT #VERYBRAVE: The Fat Girl's Guide to Being #Brave and Not a Dejected, Melancholy, Down-in-the-Dumps Weeping Fat Girl in a Bikini

Nicole is one of the most versatile and recognizable voices in the comedy landscape today. She currently stars as host of Netflix’s Emmy-nominated competition baking series Nailed It, which was just renewed for a third season. She can also be seen as producer and star of the scripted comedy series Loosely Exactly Nicole, which debuted its first season on MTV and aired its second on Facebook Watch. The show features her unique brand of confidence and irreverence as she demonstrates the hilarious missteps of what it means to be out on your own for the first time. Byer also appears in the new Netflix animated series Tuca & Bertie alongside Tiffany Haddish and Ali Wong and continues to host her popular weekly podcast Why Won't You Date Me.

Byer was an early standout and fan favorite on MTV’s hit series Girl Code, a strong and smart female-driven comedy series that brings viewers a hilarious how-to manual full of over-the-top tips to push the envelope and open the dialogue about the wonders and woes of womanhood. She is also an Upright Citizens Brigade alum who continues to cement her status as a force in standup comedy, regularly performing in cities across the country.