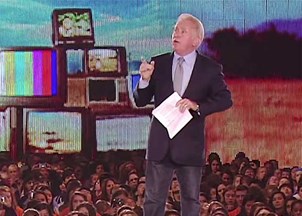 Reminding us that “above all—one heart with courage is a majority,” Martin Sheen leaves audiences reinvigorated and ready to step into the world emboldened

Of the 7.8 billion people on the planet, MARTIN SHEEN is one of our favorite human beings. He's a bold activist, holding the record in Hollywood for most arrests while engaging in civil disobedience, civic engagements, and fighting for causes that matter to him. Passionately and unabashedly outspoken on issues such as nuclear weapons, the treatment of the homeless, and climate change, Mr. Sheen gives a voice to causes and people who need it most. In a speech for We Day, the largest gathering of youth volunteers in the world, Martin Sheen shared, “While none of us made any of the rules that govern the universe, we do make all of the rules that govern our own heart.” Reminding us “this above all—one heart with courage is a majority.” At virtual and in-person events, he shares the importance of expressing deeply personal moral opinions and holding ourselves accountable through activism. Every group that hears him speak leaves reinvigorated and ready to step into the world emboldened. And of the 7.8 billion people on the planet, you get to meet one of our favorites.