Legendary Head Coach Geno Auriemma has redefined the meaning of success in his 34 years at the University of Connecticut. During his illustrious tenure, Auriemma transformed the women’s basketball program into the gold standard – both on and off the court. Under his guidance, the Huskies went from one winning season to 11 national titles, 20 Final Fours, have had six perfect seasons, and won 51 Conference titles. He also served as the head coach o the U.S. National Team, which won gold at the 2012 Olympic Games in London and the 2016 Games in Rio. In his empowering remarks he shares lessons from on and off the court on teamwork, perseverance, finding motivation, and overcoming obstacles that resonate with any organization.

An inductee to both the Basketball Hall of Fame and Women Basketball Hall of Fame, and a recipient of numerous awards including 27 National Coach of the Year honors, Auriemma has set the bar not only in coaching – but also in team building, motivation, and a tested brand of everyday leadership that creates winning organizations. He shares his insights in a highly-rated MasterClass on 'Leading Winning Teams' as well as in sought-after speaking engagements, delivering motivational insights on building sustainable success.

Please send me availability & fees for Geno Auriemma
Thank you for your interest in this Harry Walker Agency speaker.
You will hear from one of our agents in the next 24 hours. If you have any other questions or information, please call us right away at 646.227.4900. Are you also interested in learning more about other speakers? Create a My Speaker List.
Rave Reviews About Geno Auriemma
“
Geno’s legacy of putting women’s college basketball on the map will live on for the generations of women athletes who will benefit from the mastermind that was Geno Auriemma.

Play
Now
In Conversation - I Have Issues | What Drives Winning [13:18]

Play
Now
In Conversation - What Do You Think Is My Problem? | What Drives Winning [9:53]

Building Growth by Trusting Your Team

Every season, legendary head coach Geno Auriemma builds a winning culture through strategy, teamwork, and trust. As he does in his top-rated MasterClass, Geno shares his key lessons for managing short-term ups and downs to focus on long-term growth by trusting your team. ...

Every season, legendary head coach Geno Auriemma builds a winning culture through strategy, teamwork, and trust. As he does in his top-rated MasterClass, Geno shares his key lessons for managing short-term ups and downs to focus on long-term growth by trusting your team.

Coach Geno Auriemma is a legendary leader in the world of sports who propels his winning strategies beyond the basketball court, inspiring audiences to get back to the fundamentals of teamwork and revolutionize business. One of the best coaches in college basketball history, Auriemma is an expert in ...

Coach Geno Auriemma is a legendary leader in the world of sports who propels his winning strategies beyond the basketball court, inspiring audiences to get back to the fundamentals of teamwork and revolutionize business. One of the best coaches in college basketball history, Auriemma is an expert in setting communal goals, giving feedback, and motivating teams under pressure. No matter where you want to make an impact, his straightforward and engaging ideas will be a game-changer. 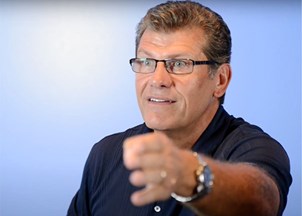 As one of the winningest coaches in sports history, GENO AURIEMMA sets the bar in coaching – redefining what success means on and off the court. Under his guidance, the Huskies have won 11 national titles, 20 Final Fours, have had six perfect seasons, and won 51 Conference titles. A key element in his strategy for building and maintaining a winning culture is trusting his players – having assembled a strong team, Auriemma encourages them to focus on being the “best version” of themselves.

In his highly popular MasterClass, as he does in impactful speaking engagements, the Hall of Fame inductee relates the ideals of leading his basketball teams to leading teams at work, at church, and even family at home, and he explains how his teamwork and leadership lessons extend to all aspects of life. Balancing both bold inspiration and practical advice, Auriemma's remarks leave audiences with tools and strategies they can implement instantly.

Watch Geno Auriemma in conversation on What Drives Winning >> 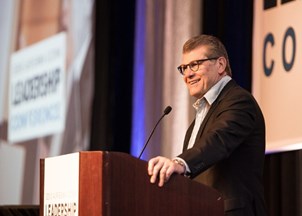 In his 34 years leading the women’s basketball program at the University of Connecticut, GENO AURIEMMA has been recognized as the winningest coach in history. Under Auriemma’s leadership and guidance, the UConn women’s basketball team has achieved 11 national titles, 19 Final Fours, six perfect seasons, and 47 Conference titles; not to mention, dramatically raising the profile of UConn and women's college basketball. For his efforts, Auriemma has been inducted into the Basketball Hall of Fame, Women’s Basketball Hall of Fame, and is a 27x recipient of National Coach of the year honors.

Off the court, Auriemma stokes his competitive streak with his entrepreneurialism – opening several restaurants and starting wine and homemade sauce lines, in keeping with his Italian heritage. The success of his businesses has secured him a place on Hartford Business Journal’s 2020 Power 50 List, where he was called “an economic powerhouse.”

In Auriemma’s empowering remarks he shares lessons from on and off the court on business, perseverance, finding motivation, and developing an ethic of success. Audiences will leave with an understanding of how to bring an athlete’s drive and healthy competitiveness to their entrepreneurial endeavors and everyday business.

UConn's 2001-02 unbeaten title team may be best in history. Geno Auriemma is still awed: 'It was unfair' - CT Insider
Something's Cooking: The Hollow - Eyewitness News 3
What is Geno Auriemma like? 5 things to know about the UConn women's basketball coach after spending a day with him. - CT Post
Set to make $3 million per year, UConn's Geno Auriemma looks back on his first contract for $30K - CT Post
‘This is your defining moment’: Geno Auriemma delivers commencement speech of UConn’s class of 2020 - UConn Blog
Geno Auriemma Appears on TODAY Show, Reflects on His Tribute to Kobe, Gianna Bryant - NBC
There’s nothing normal about this moment. Here’s how Geno Auriemma is working his way through it, as a coach, restaurant owner and reader. - The Hartford Courant
Biography

Geno Auriemma has redefined the meaning of success in women's college basketball in his 34 years as head coach of the University of Connecticut.

During his illustrious tenure, Auriemma has transformed the UConn program into the standard that all others are measured, both on and off the court.

On the court, his success includes 11 national championships, including a record 90-game winning streak and a record fourth-straight national title in 2016. Off the court, success means a flawless, 100 percent graduation rate among four-year players and one of the most beloved and followed sports teams in the country.

In addition, Auriemma recently finished a successful eight-year term as the head coach of the U.S. National Team, which won the gold medal at the 2012 Olympic Games in London and the 2016 Games in Rio. Auriemma's squad included six former Huskies and posted a spotless 16-0 record en route to the gold medals. Auriemma also led Team USA to gold at each of the last two FIBA World Championships.

He is the first coach in women's basketball history to guide a team to five consecutive Final Four appearances on two separate occasions and a run of ten-consecutive Final Four appearances is also a record. Auriemma is an eight-time national coach-of-the-year and has been named the Conference coach-of-the-year 13 times. In all Auriemma has garnered a combined total of 27 National Coach of the Year honors.

His 34-year overall record stands at 955-134 (.877), the best winning percentage in the history of the sport and he became only the fourth coach all-time to eclipse the 900-win mark when the Huskies defeated Cincinnati on February 3, 2015. Auriemma reached win number 900 in fewer games than any coach in the history of the game.

Under Auriemma, UConn has captured both a conference regular season and tournament title in the same season 18 times.

The Huskies have won the conference tournament crown in 10 of the past 12 seasons. Connecticut extended its streak of consecutive NCAA Regional appearances to 23 straight and advanced to the NCAA Final Four for the 17th time in the program's history. Auriemma also guided UConn to its 22nd 30-win season in 2015-16 and its 21st in the past 23 seasons.

Auriemma is a 1981 graduate of West Chester with a B.A. in political science. He resides in Manchester, Connecticut, with his wife Kathy. They have three children and three grandchildren.