Chad is a former tech entrepreneur turned writer and creator. Chad started his career at Google working around the world from Silicon Valley to New York to London, then took on the role of head of expansion for a tech startup that was later bought by Kaplan. But Chad felt marginalized racially, and creatively starved in corporate America. With no industry connections or experience, he quit his job in technology and started his writing career from scratch. Sanders wrote about his experience in his book, Black Magic: What Black Leaders Learned From Trauma and Triumph, where he combined his story with other Black leaders across industries. He’s sold TV series and movies and books and Op-Eds to giants like Universal, Viacom, The New York Times and Simon & Schuster. He’s collaborated with people like Morgan Freeman, Spike Lee, Kevin Hart and Will Packer. He has been touted as a writer by Brene Brown and Angie Martinez and Shea Serrano. He combines the spirit, voice, and vision of an honest, unsparing writer with the strategy and execution of a scrappy, hungry entrepreneur.

Chad will relay to your audience how and why his career took off when he embraced, instead of trying to hide or water down, his identity as a Black man and a creative.

Please send me availability & fees for Chad Sanders
Thank you for your interest in this Harry Walker Agency speaker.
You will hear from one of our agents in the next 24 hours. If you have any other questions or information, please call us right away at 646.227.4900. Are you also interested in learning more about other speakers? Create a My Speaker List.
Rave Reviews About Chad Sanders
“
Chad has the unique ability to turn his experiences and the experiences of others into a guidebook that will inspire many healthy conversations. This is Chad's superpower.

Black Magic: What Black Leaders Learned from Trauma and Triumph

Chad Sanders delivers an honest exploration of Black experiences when moving towards success in white environments. His first job in Silicon Valley quickly taught him that to gain success at work, he would need to code switch and play a certain social game to imitate whiteness. After changing every ...

Chad Sanders delivers an honest exploration of Black experiences when moving towards success in white environments. His first job in Silicon Valley quickly taught him that to gain success at work, he would need to code switch and play a certain social game to imitate whiteness.

After changing everything that connected him with his identity as a Black man, he was accepted in the business world, but did not feel like himself. When that weight became too heavy to bear, he changed back his clothes, behavior, speech, and more. Once he did, everything began to turn around for him. Sanders credits this change to what he calls Black Magic, the resilience, ingenuity, and stamina forged in his experience in America as a Black man.

In his talk, Sanders draws on powerful interviews with Black artists, activists, scientists, leaders, and champions, as well as his own story, to share the experience of imitating whiteness to gain success, and demonstrates how important it is to be your true self. 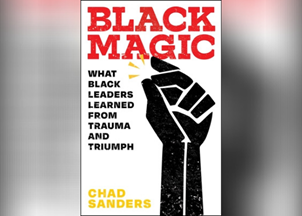 Chad Sanders' Black Magic is a powerful exploration of Black achievement based on honest, provocative, and moving interviews with Black leaders, scientists, artists, activists, and champions

In moving essays and in his speeches, CHAD SANDERS dives into his formative experiences to see if they might offer the possibility of discovering or honing what he identifies as Black Magic, namely resilience, creativity, and confidence forged in his experience navigating America as a Black man. He tests his theory by interviewing Black leaders across industries to get their take on Black Magic. The result is a revelatory and very necessary book and talk. Black Magic explores Black experiences in predominantly white environments and demonstrates the risks of self-betrayal and the value of being yourself. 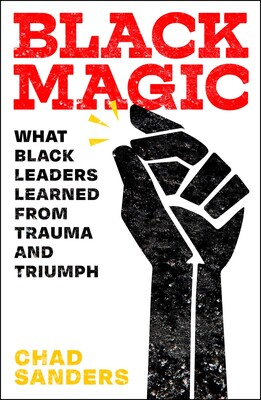 Black Magic: What Black Leaders Learned from Trauma and Triumph

Chad Sanders is a writer based in New York City. Previously, Chad worked at Google, YouTube, and as a tech entrepreneur. Chad’s screenwriting career began when he wrote for ABC Freeform’s Grown-ish in 2018. He has since written and co-written TV series and feature films with collaborators Spike Lee, Morgan Freeman, and Will Packer, including Universal’s One and Done and Peacock’s How To Survive Inglewood. Chad’s op-ed pieces have appeared in The New York Times, SLAM Magazine, and Teen Vogue. He has also written a book, Black Magic: What Black Leaders Learned From Trauma and Triumph. In addition to his writing, Chad is a director, actor, and musician. Before living in New York, Chad lived in Berlin, London, Oakland, and Atlanta. Chad earned his BA at Morehouse College in 2010. He was born and raised in Silver Spring, Maryland.